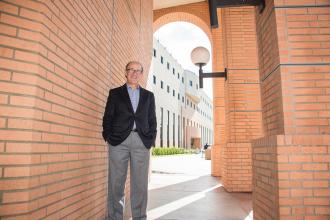 Financial executive and CSUN Nazarian College of Business and Economics alumnus Charles “Chuck” Noski has been named to the 2021 Accounting Hall of Fame by the American Accounting Association.

Founded in 1916, the American Accounting Association (AAA), which works to promote excellence in accounting education, research, and practice, represents the largest community of accountants in academia.

The Accounting Hall of Fame honors leading accountants who have made, or are making, significant contributions to the advancement of accounting. This year’s induction ceremony will be held during the AAA’s  virtual annual meeting in August. Since its establishment in 1950, 106 accountants have been elected to the Hall of Fame.

Noski ’73 (Business Administration), M.S. ’95 (Accountancy) ’07 (Honorary Doctorate), who currently serves as Chairman of Wells Fargo’s Board of Directors,  is one of only four people receiving this honor in 2021. He has proven to be a leader both in the accounting world and in his community.

In 2019 Noski served as one of three inaugural members of the recently formed Independent Audit Quality Committee (IAQC), created by Ernst & Young LLP, and was named by the Association to Advance Collegiate Schools of Business to its 2019 Class of Influential Leaders.

Over the years has also served on the board of directors for several leading companies, including Microsoft, Morgan Stanley, ADP, Avon Products, Booking Holdings, the Financial Accounting Foundation, and as a member of the Financial Accounting Standards Advisory Council, Standing Advisory Group, American Institute of Certified Public Accountants, Financial Executives International, and the Audit Committee Leadership Network-North America.

Noski is a long-time supporter of accounting education and has served as a model and mentor to many. In 2002, the CSUN Alumni Association honored Noski as a Distinguished Alumnus and in 2007 he received an honorary doctorate from the university.

He and his wife, Lisa, have been actively involved with CSUN for many years, supporting a variety of educational and other initiatives, including The Soraya. In 2015, they created the Noski Family Scholarship, which annually helps four accounting students at CSUN.