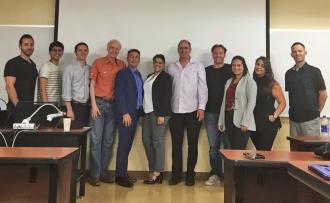 Promoting peace and diversity, one business consulting plan at a time. Students in the Nazarian College MBA program are currently working on a plan to launch Emmy award-winning Misha Segal’s new organization, The Forbidden Band.

Segal is a composer, arranger, conductor, producer, songwriter, and pianist. In the past, he has scored over 140 movies and television projects, worked with celebrities such as Smokey Robinson, and recorded several CDs that featured Trumpeters Freddy Hubbard and Mark Isham, among others. Despite that, he still deems The Forbidden Band as the most significant milestone in his career.

The Forbidden Band was created after Segal worked with New York director Qasim Bashir on his movie “Mooz-lum”. He used the movie’s theme as basis for his next CD project, and collaborated with various Middle Eastern artists that he realized would otherwise be considered his “enemies” under normal circumstances. The Forbidden Band, an ethnically-diverse group of musicians that transcend boundaries, perform music with joy and passion while showcasing how the world could look like if everyone got along.

“I am hoping that [the MBA students] will give me a path, made of logical steps to better launch my business,” said Segal.

The eight MBA students, with supervision from Professor Franck Vigneron, started working on this project at the start of the fall semester. Vigneron’s class teaches students the basic components of a marketing plan that are then used to create a solution for their client, which is presented to the client at the end of the class term. The class mainly focuses on applying the lessons learned through experiential learning and direct, hands-on experience. “This client based project builds students’ experiential skills and allows them to start networking in the business community,” said Vigneron. Students are able to discover their areas of strength and weakness, as well as gain the confidence and knowledge to formulate strategies.

“After taking this class, I hope to better understand the role of marketing, and be able to start my own business someday,” said MBA student, Brian Friedman. “I am very excited to work with Misha Segal, but perhaps I am even more eager to work for The Forbidden Band, whose mission is really motivating.”

Segal attended Professor Vigneron’s MBA class on Monday, Sept. 16 at 7 p.m. He will return at the same time on Dec. 9 so the students can present their business plan for his organization. Following the presentations, they will assist Segal in initiating the campaign.