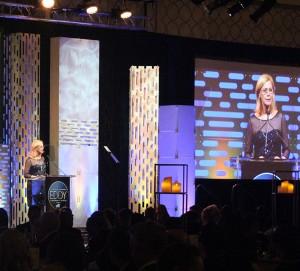 Harrison, chair of the LAEDC and the first academic leader elected to serve as such, spoke to 600 attendees at the JW Marriott at the L.A. Live entertainment complex on Nov. 7 about the important work being done by the LAEDC and its partners toward its mission of advancing opportunity and prosperity for all of the county’s residents.

“We believe L.A. County’s future prosperity requires investment in our people,” Harrison said. “It’s about parents being able to provide for their families. It’s about students learning the right skills to build careers in growing and emerging industries. It’s about job creation, which sets a foundation for healthy families and communities.”

The Eddy Awards honor those who have played leading roles in the development of the county’s economy and in the creation of well-paying jobs for its residents. 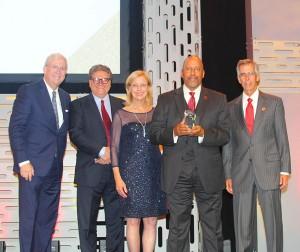 In 2015, CSUN was the first CSU campus to receive the coveted Eddy Award for Educational Leadership, and the fourth university overall, following Caltech, USC and UCLA. CSU Dominguez Hills received the award in 2019.

Harrison touted CSUN’s partnerships in the community, government and business. She cited programs such as ​the CSUN Innovation Incubator and the Entrepreneurship Program at the CSUN David Nazarian College of Business and Economics, which gives students hands-on experience and mentoring as they realize and develop their ideas with an eye toward the marketplace.

“CSUN is one of the most diverse universities in the nation, that reflects the diversity of the community we serve. We understand well the importance of lifting students and people into better lives and good-paying careers,” Harrison continued. “Our goal is to give students the education, skills and connections that will enable them to succeed in today’s globally competitive economy and workplace.”