Endowed Professorship at David Nazarian College of Business and Economics Is the First to Honor a Woman by Alison Shore, CSUN Today 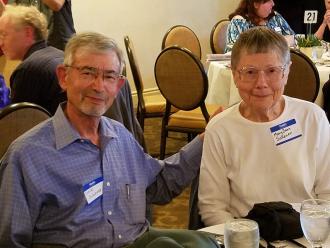 Ernest M. Scheuer, a professor emeritus of both Management Science and Mathematics at California State University, Northridge (CSUN), has made a donation to the David Nazarian College of Business and Economics in honor of his wife, to create the Dr. Mary Jean Scheuer Endowed Professorship in Finance, which will support a tenured faculty position in the Department of Finance. It is the first endowed professorship at CSUN named for a woman.

“The benefit of this generosity extends far beyond the department and college — it serves as a beacon for the entire university,” CSUN President Dianne F. Harrison said. “As a woman and as an educator, Mary Jean Scheuer raised the bar through tenacity, talent and hard work, setting a standard that we strive to uphold at CSUN. The Dr. Mary Jean Scheuer Endowed Professorship in Finance rewards top faculty whose expertise will benefit our students who, in turn, go on to positively impact regional and national economies.”

Mary Jean’s path was not a well-trodden one for a young woman of her era, mid-20th century America. She did not entirely buck tradition; marriage and motherhood figured prominently in her life. But Mary Jean yearned to expand her own horizons, and it was the world of finance, then and still a male-dominated sector, that intrigued her.

Her interest in finance led to her acquisition of several degrees, including a B.S. and M.S. in Accounting and Finance from Kansas State University and a D.B.A. in Business Administration from the University of Colorado. What began as a desire to establish a finance-related career turned to one of necessity for Mary Jean because by the time she landed in Colorado, she was a single mother of three.

In 1967, Mary Jean arrived at San Fernando Valley State College (renamed CSUN in 1972), where she started as an assistant professor in the School of Business Administration and Economics. Here she met Ernest, who joined the Department of Management Science in 1970. He was awarded tenure and full professor status in 1972. Later, he was given an additional appointment as professor of Mathematics. They married in 1972.

“I admired her intellect and determination, particularly because she faced discrimination and poor attitudes from male counterparts,” Ernest said.

Mary Jean remained undaunted, rising through the ranks to become a tenured professor and earning yet another degree, an M.A. in Art History from CSUN. She was an esteemed teacher and innovator, introducing the hugely influential Lotus 1-2-3 (a spreadsheet program that was the precursor to Excel) in her finance department courses.

Audrey Arlington, the Scheuers’ daughter, said her mother thrived despite many responsibilities and little money.

“My mother lost her parents when she was young and really did everything on her own,” Arlington said. “When she and her [first] husband separated, she was left with three children and a shoestring budget.”

When they lived in Colorado, her mother studied, drove from Boulder to Denver to teach a night class, and worked in the university library.

When Mary Jean and her children later moved to California, they settled in Chatsworth, near a burn zone. Mary Jean, who was finishing her dissertation, kept her papers and typewriter in the car in case fire forced them to make a speedy getaway.

“Perseverance is her middle name,” Arlington said. “I’m so pleased that my dad chose this form of honoring her, and I was very happy to know they’d try to award the professorship to someone similar in spirit to my mother.”

The Dr. Mary Jean Scheuer Endowed Professorship in Finance will be used to recruit new faculty or retain stellar faculty, either a standout in research or teaching who has demonstrated experience and scholarly research in the field of finance. The recipient’s performance will be reviewed every four years, with the expectation that he or she maintain the level of scholarly activity that had been in place before receiving the professorship.

“This is a very, very impactful gift, made even more impactful because it’s supporting a faculty position,” Dean of the Nazarian College Chandra Subramaniam said. “Because Ernest was a professor here, he understands how important it is to reward and retain great faculty.”

Furthermore, this kind of financial commitment is something that enables the Nazarian College to plan, remain competitive with private institutions, and attract top faculty and students, Subramaniam said.

“With declining support from the state, donations like this are essential to CSUN’s excellence and progress,” said Robert Gunsalus, Vice President for University Relations and Advancement and President of the CSUN Foundation. “They also provide an example that is inspiring others to invest.”

Mary Jean’s love of learning, love of teaching, and legacy of hard work and determination are reflected in the Dr. Mary Jean Scheuer Endowed Professorship in Finance, an endowment that will enhance the Nazarian College of Business and Economics for generations to come.