CSUN Nazarian College and Lt. Gov. Call on Women in Business to Not Just 'Lean In,' but to Link Arms

CSUN Nazarian College and Lt. Gov. Call on Women in Business to Not Just 'Lean In' but to Link Arms by Olivia Herstein, CSUN Today 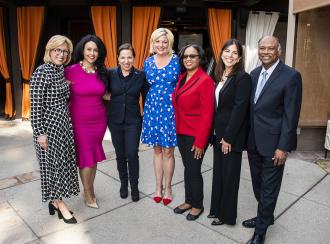 In the name of access, support and equity, CSUN’s David Nazarian College of Business and Economics partnered with the Valley Industry and Commerce Association (VICA) on Nov. 19 to convene hundreds of women leaders to connect with and mentor (en masse) the next generation of women leaders: CSUN students.

The business luncheon event, “Extraordinary Women in Leadership,” took place at The Garland hotel in North Hollywood and featured special guest speaker Lt. Gov. Eleni Kounalakis — the first woman ever elected to the second-highest post in the state of California.

The program was also meant to celebrate the 50-year legacy of the CSUN Nazarian College’s growth, development and empowerment of California’s women business leaders.

The proof was in the panel: Deanna Austin ’90 (MBA, Business Administration), chief commercial officer for Princess Cruises; Los Angeles City Council member and President Pro Tempore Nury Martinez ’96 (Political Science), who for many years served as the only woman on the City Council; and Rashmi Menon, vice president of Parsons Corporation, a longtime corporate partner and sponsor for CSUN. Kounalakis addressed her remarks to the women students in the room, who are “ready to launch into the workplace, armed with degrees and training,” she said.

“Achieving gender parity in the workplace is one of the best things a company can do to advance the bottom line,” said Kounalakis, who also served as ambassador to Hungary under President Barack Obama. “There is now an established body of research that points to this fact: Men and women working together side by side, in any organization, results in the best outcomes. So, when you claim your seat at the table, ladies, do so with full knowledge that you are doing the organization a favor!

“It’s time for women to own the fact that we add our perspective, dedication, ideas, experience and talents — and these are valuable things,” she said. “I’ve also learned this: It’s really still not fair out there. In spite of the tremendous gains for women in business and leadership, we’re still a good distance away from where we need to be for gender parity. Only 19 percent of board members of publicly owned companies are women, but only 5 percent of CEOs of Fortune 500 companies are women. Here’s a data point for you: A CEO of a Fortune 500 company is more likely to be named Jim than to a be a woman.”

CSUN is continuing its work in the higher education trenches to reverse this trend in the U.S., said Natalie Mason-Kinsey, chief diversity officer for the university, who opened the program.

“Fifty-five percent of our 40,000 students are women,” Mason-Kinsey said. “As a university, we recognize the value of women’s contributions in every field and domain, as well as the need to support and nurture their involvement. We are one of the most diverse universities in the country, recently ranked by the Wall Street Journal as second in the nation for our diverse learning environment.”

Wendy Greuel, executive in residence for the Nazarian College and former Los Angeles City Council member and city controller, thanked Nazarian College Dean Chandra Subramaniam for his unwavering support “of women in leadership and advancing the goal of ensuring that we have the best-educated students, who will thrive and succeed in the business world,” she said.

The keynote speaker was Maryam Brown, president of the Southern California Gas Company, who spoke about the power of mentorship — especially between women.

“Early in my law school career, I vividly remember a law professor who had become a mentor of mine,” Brown said. “I was burdened with a tremendous workload and the pressure to perform in school. My professor said, ‘When you don’t know where to start, take a breath, and be thankful for that breath.’ To this day, that advice serves me in the work I do.” She and the lieutenant governor, as well as the panelists, spoke about professional women’s competitiveness, which can sometimes manifest itself as insecurity — and fighting each other for a perceived limited number of “places at the table.” That perception, they said, is false.

“In my view, the most powerful tool that women have at our disposal is the easiest one to access,” Kounalakis said. “That is: helping each other. So, let us recommit ourselves to standing up for one another, encouraging each other and celebrating each other’s successes. Over the years, when I have felt that I wasn’t getting a fair shake, I remembered that feeling when I had the opportunity to help another woman. It made me feel power. Everywhere you look, the potential for sisterhood is right around you.”

“We expect this to be our first event in an annual series that recognizes women leaders, whose success is seen by our students,” Subramaniam said. “We want our students to picture their futures and see themselves as the next generation of leaders.”