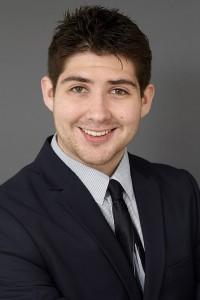 A team led by recent CSUN graduate Matt Smalley ’19 (MBA) pitched its fire-monitoring system to a panel of investors and entrepreneurial leaders at the 2020 First Look SoCal Innovation Showcase.

Smalley’s team, Delphire, is developing a system that includes video, infrared cameras and other monitoring capabilities, which first responders could deploy along fire perimeters to provide real-time monitoring of conditions. The devices, which the team has dubbed “oracles,” would continuously monitor an area better than human scouts on foot, and provide a closer look at on-the-ground conditions than is currently provided by drones, which also can’t be deployed while aircraft are being used to fight fires.

Local fire departments and other protection agencies could quickly distribute the oracles to areas where a fire has started. The information could help firefighters track locations where, for example, the wind shifts and causes the fire to spread to a new spot.

“We can fight fire with information,” Smalley said. “The main benefit is that it allows them to contain fires more easily. It gives them more up-to-date information, so that the fire, if it gets through a firebreak or a spot fire pops up, they can deal with it immediately.”

Each oracle would cost around $3,500, and could be effective with about two placed per perimeter mile. Smalley estimated roughly 60 would be need for a 30,000-acre fire, for a one-time cost of about $210,000.

The First Look SoCal Innovation Showcase, sponsored by the Los Angeles Venture Association, is an annual event that celebrates the early-stage teams commercializing tech and life science breakthroughs. Participating in the showcase after an application process was another measure of success for Delphire, which participated in the 2020 Bull Ring New Venture Competition, hosted by CSUN’s David Nazarian College of Business and Economics.

A historic fire season in California and throughout the West has underscored the potential benefits of the Delphire system, Smalley said. In 2020, there have been more than 8,000 wildfires that have burned more than 3.7 million acres in California, according to the California Department of Forestry and Fire Protection. Since August 15, there have been 26 fatalities and more than 6,600 structures destroyed.

The idea for the device, originally developed by Smalley’s younger sister, Olivia, during a school robotics competition, has been patented for wildfire surveillance. The team also includes Gilberto DeSalvo, a CalTech graduate, and Daniel Ring, a software engineer. The Delphire team soon will seek investors to help develop a prototype, Smalley said.