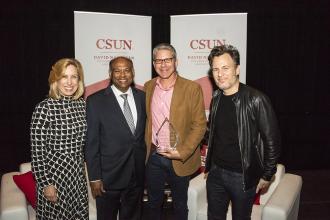 A few minutes after CSUN alumnus and multimedia executive Bruce Gersh delivered an hour-long talk to students on Oct. 29 at the Northridge Center for the David Nazarian College of Business and Economics Distinguished Speaker Series, a line started forming in front of the stage.

Some students wanted more. They had more questions or simply wanted to meet the president of PEOPLE, Entertainment Weekly and People en Español and Four M Studios of Meredith Corporation.

For them and many in the audience, it was an inspiring talk from one of their own — a Matador — on his own professional journey, the rapidly and ever-changing face of media and how Meredith’s portfolio is constantly evolving to meet the public’s growing appetite for digital while still committing to meet the demands of those who enjoy and purchase print. He also talked about how data is helping to shape decision-making in an ultra-competitive marketplace.

The brands that he oversees are doing all of those. As an example, he shared how the iconic Entertainment Weekly has shifted to a redesigned, deluxe print format that is now published monthly. That shift has allowed EW to devote more to digital formats, such as podcasting, online-only stories and digital covers. Its first digital cover was released in July and featured a moving spider crawling past actors Jake Gyllenhall and Tom Holland, stars of the film “Spider-Man: Far From Home.”

He also shared that the iconic PEOPLE magazine has grown exponentially on the digital side during a time when magazine audiences are shrinking across the market. While PEOPLE has maintained its status as the largest magazine in readership in the country — 36 million total readers and a circulation of 3.4 million — PEOPLE’s digital audience is 76 million, with more than 2 billion views in video.

“There’s a benefit to having a physical magazine in your hand, showing up in your mailbox every Friday, picking it up at the airport on your flight. … People want our magazine because they want to escape. They want to dive into our human-interest stories, they want service, they kind of want everything in one nice little package with a bow. And we’re able to deliver that consistently every week,” Gersh said.

“As we look into our crystal ball, we’ve somewhat hedged our bet, I would say, on the digital side. So now we’re a top digital brand, as well, commanding premium CPMs (cost per thousand) and growing that channel, not only in one way, but in multiple ways — from traditional news to social media to video. So I feel like we’ve prepared ourselves for kind of the future. We don’t know what the future holds, but we’re definitely preparing ourselves for it.”

The big picture for students was a peek into how one of the largest media businesses in the world is using data to shape decision making to reach and grow audiences. Students also were shown how Meredith and its leadership are finding creative ways to build new avenues into people’s lives and at the same time maintain some of the traditions that have built brand loyalty.

Gersh is the sixth featured speaker in the series, which was launched in 2017 with businessman and former United States Secretary of Housing and Urban Development Henry Cisneros. Gersh is the fourth CSUN alum, joining Michael Grillo, executive producer of “Avengers: Endgame,” Steve Rabuchin, vice president for Amazon Alexa Voice Services and Alexa Skills, and Michael Kramer, CEO and founding partner of Ducera Partners.

Like the others, Gersh shared how CSUN helped launch his professional journey.

To watch the full event or see past speakers, please follow the link here.