A group of CSUN students have come together via social media to fight pediatric cancer. 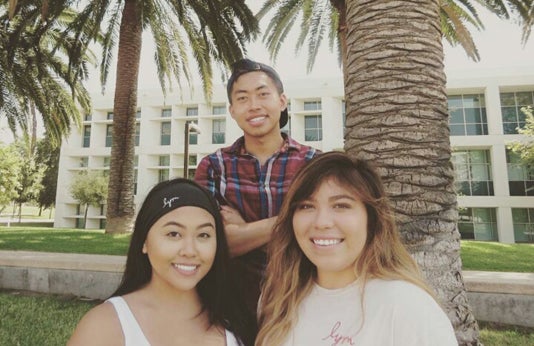 It all started with a Facebook advertisement. Thiana Martinez was a commuter student looking for a way to get more involved at California State University, Northridge when she saw an ad for a company called Love Your Melon. According to its mission statement, “Love Your Melon is an apparel brand dedicated to giving a hat to every child battling cancer in America as well as supporting nonprofit organizations who lead the fight against pediatric cancer.” The company recruits groups of college students to form campus crews to represent the brand and become active players in the fight against childhood cancers.

“I’ve been working with kids for a long time, and my goal is to work with a hospital or kids nonprofit in the future; this just really hit home,” Thiana says.

As a public relations major who is active on social media and regularly follows several bloggers and YouTube stars, Thiana understands the power of platforms like Facebook, so she took the next logical step and posted a message on a Facebook page for the CSUN class of 2018 seeking others who would be interested in starting a CSUN Love Your Melon campus crew.

Among the first to respond were David Lim, a senior business management and Asian American studies double major, and Shei-lina Bundalian, a junior public health major and the vice captain. Together, they’re bringing comfort and joy to some very deserving young children and making Love Your Melon an active part of the CSUN student community.

“Giving back is the best way of receiving,” David says. He is also director of communications for the national chapter of the American Management Association, part of Associated Students, and works part-time assisting with marketing at an insurance company.

Since starting in fall 2015, the group has participated in several fundraising events including CSUN’s Matathon, the Castro Family Toy Drive in Camarillo and Relay for Life. Participants have also made personal home visits to several children with cancer, during which they present a Love Your Melon beanie and spend time playing with and entertaining them.

It’s smooth sailing now, but getting CSUN’s Love Your Melon campus crew off the ground hasn’t been without its challenges.

“In the beginning, being captain wasn’t easy for me because I didn’t have a lot of leadership experience, but my crew members have helped me,” Thiana says. “I think I’ve grown a lot as a leader and as a woman.”

For many of the crew members, the gravity of what they’re doing didn’t become clear until June 2016. That was the day they received news that one of the children they had visited, a 4-year-old boy, had passed away.

“His death was devastating,” Thiana says. “We were invited to the funeral.”

The pain of the loss has helped further solidify the CSUN crew, and now they’re an officially recognized campus organization.

“Kids are our future,” Thiana says. “I want to do as much as I can to help them obtain a better future.”