Despite dark moments in her personal life, Africana studies and child and adolescent development major Ma’Ronda George is working hard to make CSUN a brighter place. 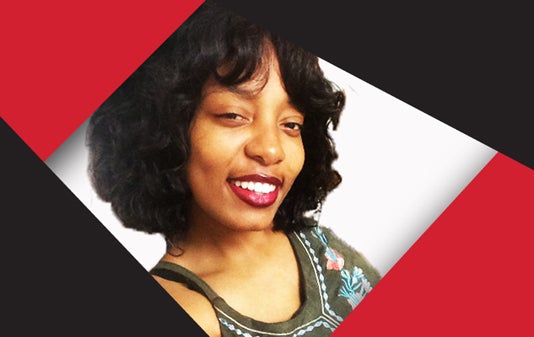 “I never signed up to be a leader,” Ma’Ronda George says.

Ma’Ronda arrived at CSUN as the first in her family to attend college. Her parents and older siblings (two brothers and a sister) didn’t finish high school, but Ma’Ronda found herself on the path to higher education after she was selected for C5 Los Angeles Youth Foundation in middle school. The nonprofit program provides services, support and opportunities, including a summer camp, to high-potential students.

Growing up in a low-income, single-parent household, there were times when Ma’Ronda’s family struggled, but C5 allowed her to realize that there could be more to her future.

“It helped me to see that college was a choice,” Ma’Ronda says.

When she arrived at CSUN, Ma’Ronda’s mother encouraged her to live on campus so that she could focus on school without being distracted by family issues. Ma’Ronda agreed, and the decision turned out to be an important one. She developed a community within Student Housing and has served as a resident advisor for three years. Her goal: Create a healthy environment for her residents that is more welcoming than what she experienced as a high school student.

“I went to [four] different high schools,” she says. “As a new student, I always felt like an outsider.”

Several factors motivated Ma’Ronda to get involved in CSUN’s black community. One was the opportunity to learn more about her African-American heritage through CSUN’s Africana studies department. After taking a class with Professor Aimee Glocke, she realized just how much she didn’t know.

“As a black person I was never taught my history,” she says. “I feel like I have an identity now.”

Losing her oldest brother Derric in her sophomore year also had a big impact on Ma’Ronda. Derric had been living in Boston at the time, and was stabbed to death by a white male friend. Her family had to fundraise enough money for his funeral in Southern California.

“Being involved in the black community and helping others became my life. I put all of my passion and energy into that instead of dealing with the emotions, pain, sadness and anger [over Derric’s death].”

The 2014 police shooting death of Michael Brown, an unarmed, black 18-year-old in Ferguson, Missouri, further encouraged her activism. At the time, Ma’Ronda was one of several students who helped to reenergize CSUN’s Black Student Union by organizing a week of events. She also helped to create the Black Leadership Council, a coalition of African-American student leaders.

“I feel like we’ve done a great job in providing a sense of community, and increasing exposure and unity,” Ma’Ronda says.

She hopes to continue leading after her graduation this spring, as she attends the Urban Teacher program at Johns Hopkins University. After completing the four-year program, she’ll receive a master’s degree in elementary education with a certification in special education. Her dream is to eventually start her own K-5 school, focused on educating and inspiring low-income black students.

“After CSUN, [Urban Teacher] is the experience that I need to continue learning to be the best teacher I can be,” she says.