Richard “Moja” Robinson Jr. has a lot of big dreams, and scholarships are helping him to make them come true. 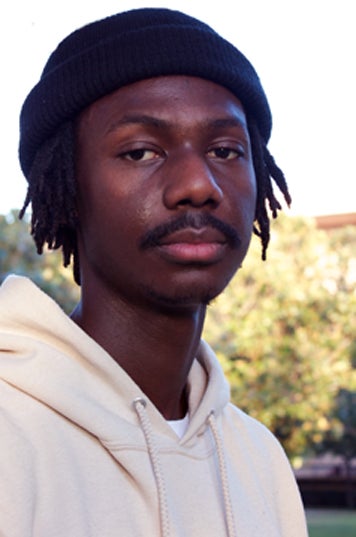 Richard “Moja” Robinson Jr. is truly a modern-day Renaissance man. As a California State University, Northridge student, he’s majoring in business administration (global supply chain management), with a minor in sustainability, but during any given week, he’s likely to be found bouncing between projects ranging from science and technology to business and art.

At CSUN, he’s finally found a way to piece it all together, and although he isn’t sure where his future will lead him yet, he feels confident that even after learning some hard lessons early in his academic career, educational expenses won’t be a part of it, thanks to his strong work ethic and scholarships.

“My goal is not to accrue any undergraduate debt,” he says. “At some points I maintained three jobs and applied to scholarships I didn't even qualify for to aid me on my quest.”

Like his varied interests, Moja’s educational path takes a lot of twists and turns. After high school, Moja enrolled in a small technological university in New York to pursue a computer engineering degree, with the understanding that he would receive a generous scholarship. When the scholarship never materialized, he was stuck with a bill he couldn’t afford. He moved back to California and enrolled in a community college before transferring to another California State University campus, and finally CSUN.

It was the Institute for Sustainability that convinced him he’d finally found his educational home as a Matador.

Moja has been passionate about the environment ever since taking a high school environmental science class,. Today, he strives to be a conscious consumer and maintain a nearly vegan lifestyle. Moja also skates to campus and he’s been paperless since 2011.

“Sustainability is not just about me,” Moja says. “Maybe I can spark the mind of tomorrow's generation.”

Since enrolling at CSUN, Moja has received the Alan Campos Dream Big Scholarship, and other awards from entities including Educational Opportunity Program, ABET (which accredits college and university programs in applied science, computing, engineering and engineering technology at the associate’s, bachelor’s and master’s degree levels), Buick, The Bernard Osher Foundation, Council of Supply Chain Management Professionals and the David Nazarian College of Business and Economics. This financial support has allowed him to pay off the past educational expenses (approximately $30,000) incurred at his first school and defray new expenses at CSUN.

Summarizing his outlook, Moja says he plans to keep pushing ahead living by what he calls the “second place theory.” The idea is to seek continuous improvement; even if you come in first place you can still do better by improving on what you did, thereby beating yourself.  In coming to CSUN, he’s certainly done just that.