Amanda Derzy has discovered her passion as a CSUN film student. 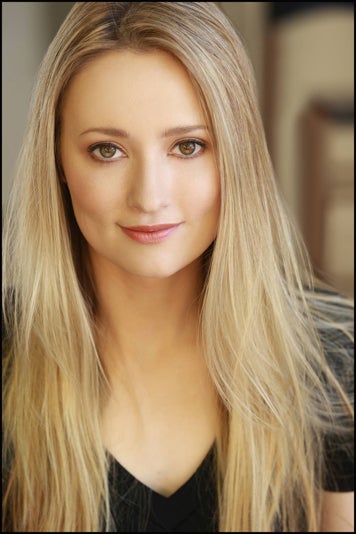 Perhaps you’ve seen it. This fall, the California State University, Northridge Department of Police Services released an active shooter training video, designed to help students, faculty and staff understand what to do in the event of an active shooter emergency on campus. Amanda Derzy was one of the CSUN film students who gained valuable experience working on the project. As second assistant director (AD) she helped manage talent, and created call sheets and production maps to inform the cast and crew of when and where they needed to be.

“I worked hand-in-hand with the first AD,” she says. “I acted as his messenger and liaison, and helped him keep us on schedule.”

Born in Los Angeles, Amanda moved to Phoenix with her parents at age 7.  Despite having left the bright lights of Hollywood, Amanda grew up wanting to be an actress.

“My mother likes to tell me she doesn’t remember a time when I wasn’t singing or talking,” she says.

She performed in community theater productions and school plays, and after receiving her associate degree in computer programing, returned to Los Angeles to pursue an acting career.

It was being cast in a  student film that introduced her to CSUN and a new path. After talking to some of the student filmmakers, Amanda decided to apply to the cinema and television arts program. Today, she has her sights set on a career behind the camera.

As a Matador, Amanda has found her niche in producing. Working on the active shooter training video provided a unique opportunity to gain hands-on experience.

So far, response to the project has been very positive.

“We wanted it to be safe enough that anyone can watch it, but important enough to leave an impact,” Amanda says.

Last summer, she had the opportunity to work with Professor Nate Thomas on a public service announcement project for the FBI. She served as second AD again, and helped to produce three videos, one of which featured an interview with a man convicted of illegally uploading films to the internet.

“Although Professor Thomas involves his students, he still runs his sets like typical Hollywood productions, so they provide the type of hands-on education that just can’t be found in a book,” Amanda says. “We get the opportunity to learn set etiquette and the chains of command, as well as network with crew members who already work in the industry.”

Looking ahead, Amanda expects to pursue graduate school after finishing her degree in 2017.