Jonathan Saedian is bringing customizable music education to the public with his award-winning startup Take Sessions. 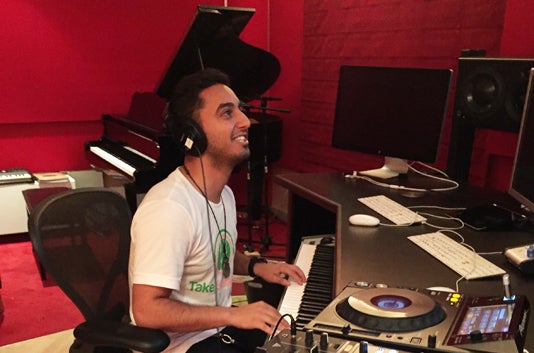 “The moment you hear a song it can change your emotions in an instant,” Jonathan Saedian says. “I think that’s the power of music.”

A senior marketing major at California State University, Northridge, Jonathan is making music lessons accessible to everyone with his award-winning startup Take Sessions. With the Take Sessions platform, aspiring music students of all experience levels can book an at-home, in-studio or online collaborative private lesson.

“We connect qualified, vetted musicians with students who want to learn,” Jonathan says.

Born in Iran, Jonathan moved with his family to Los Angeles at age four. He discovered a passion for music early and by age 11 he was using a music production app to create his own sounds. Eventually, Jonathan gained enough skills and experience to build a reputation as a DJ, regularly playing private events. When the recession hit and his work slowed down, Jonathan began offering DJ lessons. His father had helped him get started by purchasing his equipment, and with the family’s menswear business suffering, Jonathan wanted to help contribute.

The idea for Take Sessions was born shortly after Jonathan started taking on students.

“I thought, why not create a platform that connects students and instructors,” he says.

It took several years, but Jonathan finally started his company in 2015. He has built his brand with a “No excuses” attitude, hard work and dedication, and now, it’s poised for some serious growth. He’s developed a partnership with award-winning Spanish composer Lucas Vidal, and Take Sessions won second place in CSUN’s 2016 Bull Ring new venture contest, hosted by the David Nazarian College of Business and Economics. The prize: $15,000 and valuable mentorship opportunities, which Jonathan is using to create a new platform for the next phase of the company.

Currently, Take Sessions is only available in Los Angeles, but eventually Jonathan hopes to launch it nationwide.

“I want Take Sessions to be a full-music-services platform offering both lessons and event bookings,” Jonathan says. “That’s my passion coming to fruition.”

His Bull Ring contest award is helping propel Take Sessions to the next level, and also confirming for Jonathan just how important his education is.

“If it wasn’t for everything that I’ve learned in class, there’s no way I could run a business,” he says.