Involvement as a student leader has been the key to academic success for Nicholas Jackson. 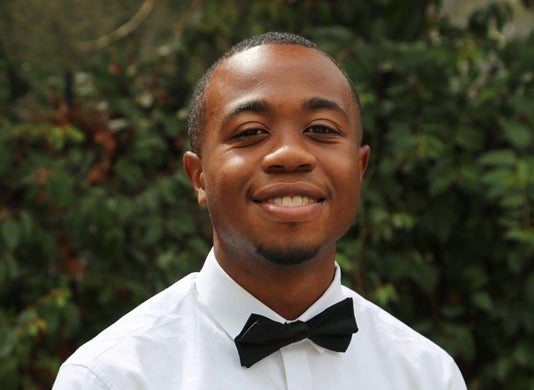 After his first semester at California State University, Northridge, Nicholas Jackson found himself with a problem. He was on academic probation, and it was time to reevaluate.

“I was not prepared enough curriculum-wise, and my study habits were not great,” he says. “I realized I either need to get on it, or I won’t be here.”

Nicholas managed to bring himself back on track and then some. Encouraged by his mother (a CSUN alumna), Nicholas got involved on campus, and as a result found himself more motivated and engaged in his coursework. Now, he’s teaching others how to succeed, and leading by example.

One of the first organizations that Nicholas became involved with was the Black Male Initiative, a program created to address the pervasive academic disengagement and underachievement, and the low enrollment and completion rates of African-American men in college.

Nicholas says he gained another group of brothers when he joined CSUN’s chapter of the Phi Delta Theta fraternity in his second year.

Armed with his new support system, Nicholas began taking on leadership roles with both organizations. He joined the executive board of the Black Male Initiative and has since served as director of social affairs and later co-president. Nicholas also serves as a New Student Orientation leader, and he was recently elected social chairman for his fraternity.

One of his proudest accomplishments with The Black Male Initiative was organizing “Do All Lives Matter?,” an open-forum event for students, staff, and campus and municipal police to talk about the issues of police brutality and how to mend the gap between black students and police officers. As the Phi Delta Theta community service chairman, he organized donations to CSUN’s on-campus food pantry.

Nicholas’ work as a student leader has not gone unrecognized, and last year he was recruited to run for Associated Students. He won the lower-division senator position and will serve as the vice chair of the student affairs committee for spring 2017. One initiative he’s currently working on is a campus bike rental program.

“The program will rent out bikes to students on campus for a subsidized cost and alleviate on-campus parking issues, as well as promote a sustainable lifestyle,” he says.

One of the biggest lessons Nicholas has learned as a student leader is a personal one. He’s gained a reputation as a strong communicator, and that has inspired him to change his academic path.

“I started as a psychology major, but switched to communications studies,” he says.

“I was only taught European history [in middle and high school],” he says. “I took an intro class [at CSUN], and I felt so liberated learning about my history, why I do the things that I do and why I am the way that I am. I needed that education for myself.”

Now, he, who was once on the verge of ending his higher education, is planning on pursuing graduate school.

“If you want to see change on your campus, or in yourself, you have to be the one that makes the change,” Nicholas says. “I’ve worked really hard, and one day this is all going to pay off. One day I will be able to buy my mom a house.”