One California State University, Northridge senior found harmony and healing by sharing her story to support the LGBTQ community and those at risk of suicide. 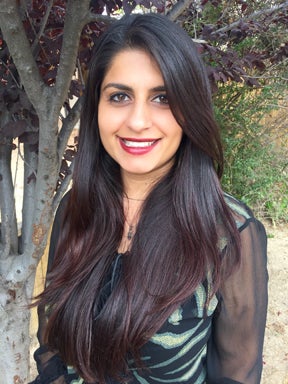 Hedyeh Rezaei was almost a statistic. Suicide is the second leading cause of death for ages 10-24, according to recent Centers for Disease Control data, and just a few years ago, Hedyeh tried to end her own life on more than one occasion.

Eventually, she came to California State University, Northridge and found the support that she was missing. Now, she’s hoping her story can help others.

Born in Tehran, Hedyeh was adopted as a newborn. At age 7, she moved to the United States with her mother to escape an abusive father. In her new home, Hedyeh had trouble fitting in. She struggled all through school. At first, not knowing English was the biggest hurdle, but later it became clear that there were other problems.

“I remember taking different courses that I was interested in, but I just wasn’t grasping the work,” she says. “I took it as, ‘Maybe I’m just not smart enough. Maybe I’m just not one that will succeed in a school setting.’”

Hedyeh’s self-doubt and isolation became even more pronounced when she challenged the established religious and cultural beliefs of her family by coming out as queer. Then she lost her partner in a car accident. She was ready to give up.

“Suicide attempts, those are moments that words can’t describe,” Hedyeh says. “I reached a point in my life where I felt like I had nothing.”

She began seeing a therapist and decided to return to school. This time, however, things would be different. Hedyeh learned that her past educational challenges were the result of a learning disability.

“That’s when things really changed for me,” Hedyeh says. “For the first time I realized that my struggle was real, and I was not alone. Within the last year there has been a fire lit inside me, inspiring me to take risks within my education and set higher goals for myself.”

Now at CSUN and majoring in liberal studies and psychology, she’s finally looking forward to whatever the future holds. Her goal is to become a licensed clinical social worker, and — in addition to working as a student assistant at the Pride Center and facilitating several support groups at the Los Angeles LGBT Center — she is part of CSUN’s BLUES project, a peer education program created to raise awareness and reduce stigmas around depression and suicide.

As a BLUES project volunteer, Hedyeh speaks out about her personal experience overcoming depression and suicidal thoughts.

“Sharing my story has brought me endless healing,” she says. “Being a part of BLUES is a way for me to fight, not only for myself, but for those who are struggling at this moment. There’s nothing like walking into a room and breaking the silence about a topic people don't want to talk about. It’s amazing when, after a few minutes of me being raw and vulnerable, something lights up in an individual who really needed to hear some hope. That makes it all worth it.”

If you’re struggling, the BLUES project is just one of the University Counseling Services programs that can help.