California State University, Northridge Matador Mercedes Frias was on a path to self-destruction, until she found a support system and inner strength. 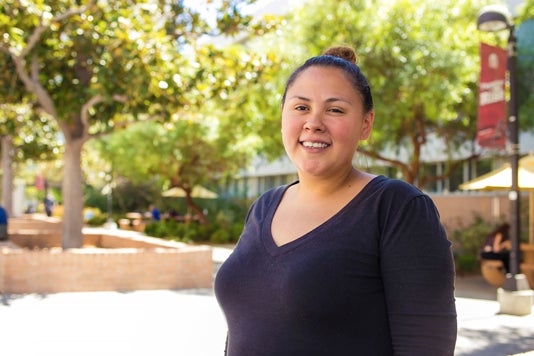 Just a few years ago, life was very different for Mercedes Frias. She was alone, about to age out of the foster care system, and she had given up on herself.

“I was struggling,” she says. “Nothing seemed like it was ever going to get better.”

Things did change, and now, Mercedes is preparing to complete her undergraduate degree at California State University, Northridge. In spite of her difficult past, she is looking forward to a positive future.

“I would not be where I am today if it weren't for my adoptive mom and my dog Romeo,” she says. “Now, for the most part, I feel empowered and in control of my life. My hope is to break the typical stereotypes of foster children.”

Mercedes was first placed in foster care at age 9. Her biological mother had left her and her younger brother living with their father, and they were removed from his care when he became abusive.

Also, Mercedes was born with an ocular condition called Extropia. Unfortunately, the issue was not properly corrected surgically, and it has caused near blindness in Mercedes’ right eye. As a result, schoolwork was always a challenge, and Mercedes was teased and bullied frequently for her glasses and poor eyesight. Eventually, she started fighting back by defying authority and lashing out.

“I was very defiant, and I did not trust anyone,” she says. “I pushed everyone away. It was a defense mechanism.”

By the time she was 17, she had been ejected from several group foster homes, and she had given up on school. To cope with her anger, fear and sadness, Mercedes turned to self-harm.

Then, after a particularly difficult time, Mercedes finally truly connected with a staff member who worked at the group home she lived in. The woman became a mentor, and allowed Mercedes to come and live with her on the condition that she stop hurting herself, change her behaviors and find some direction by going back to school and getting a job.

“I knew that I could rely on her,” Mercedes says. “She took a huge risk for me.”

Since then, the two have developed a strong mother-daughter bond, and Mercedes has worked hard to keep up her end of the bargain. She’s been employed as a coffee barista for 5 years, and she’s found emotional support through volunteer work with several dog rescue groups and her own rescued pit bull.

Most importantly, she’s looking forward to completing her education at CSUN. Mercedes is in her senior year as a psychology major, and she is succeeding with help from faculty — including psychology professor Michael Hess, who she says has helped her understand material from some of her most difficult psychology courses — and staff from several student services and support programs.

“Because of the Educational Opportunity Program’s Resilient Scholars I had a better head start,” Mercedes says. “I was also able to meet and maintain friendships with a lot of other students some who were also in foster care. This made it more comfortable for me. My EOP advisor Kevin Zemlicka and [Staff member] Jina Gonzalez are also always there when I need to talk.”

Additionally, the Disability Resources and Educational Services (DRES) office has provided Mercedes with access to resources including large-print books, recording devices and most of all, encouragement.

“They’re just building a bridge for me to go higher and higher,” she says. “Through DRES I’ve found strengths that I never knew I had. I’m trying not to let anything get in my way.”