The Doctors Are In

Two California State University, Northridge biology students have found their own paths toward careers in medicine. 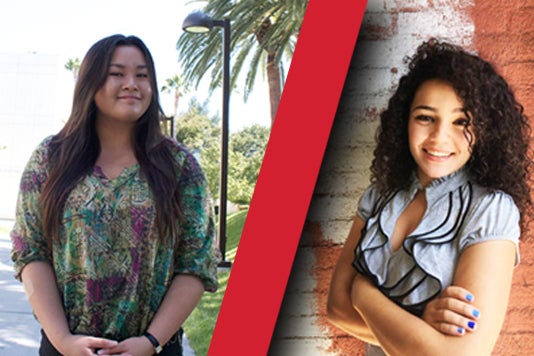 When Natalie Dahan first arrived on the California State University, Northridge campus she had no idea which direction she wanted to go. For Shannen Guarina, the path was clear. Today, they are both planning to pursue medical school, and they’ve each found their own unique routes toward fulfilling their dreams of becoming doctors.

Natalie, a junior biology major, is planning to pursue emergency medicine and hopes to work as a trauma surgeon. She spent last summer volunteering with a mobile clinic unit in Haiti.

“It was an amazing experience,” Natalie says. “I got to assist with exams and helped clean the wounds of a burn victim who had fallen off of his motorcycle. The experience definitely solidified my future goals.

Shannen, a senior biology major who was born in the Philippines and immigrated to the United States with her family at age 3, says she grew up knowing that she wanted to make a difference helping people get well. Her mother and father are both nurses, and as a child she saw how important good healthcare is first-hand. She had severe asthma and often ended up at a small family clinic that accepted out-of-pocket payment.

“Check-in would be early in the morning, and we wouldn't be seen until the late afternoon,” Shannen says. “Once we were actually seen by a doctor it felt rushed, and there were at least 50 other people waiting to be seen. Even though I was just a kid, I knew that it wasn't right. I realized I wanted to pursue a truly altruistic career and help those in my similar situation.”

“I’m so grateful to be part of the lab,” Shannen says. “I’m working with a bunch of people who are similarly driven, and they push me to do better.”

“I became a training coordinator, helping to train and test the new interns,” Shannen says.

Natalie has spent most of her life training in the performing arts.

“Growing up, my [three] sisters and I would always be setting up shows when we would have big family dinners,” Natalie says. “We built stages out of moving boxes.”

A gifted singer, she started at CSUN as a music major, and in 2014 auditioned for the television talent show “X-Factor.” Recently, she self-released her first album, “Forbidden Love,” on iTunes, SoundCloud and YouTube.

“I came to CSUN not really knowing what I wanted to do,” Natalie says. “I was overwhelmed that I could choose my future, and I realized that performing was not something I wanted to pursue as a career.”

It was a conversation with her own doctor that made her seriously consider medicine.

“She told me I would want a career where I can wake up everyday and want to go to work,” Natalie says. “Saving lives is the most rewarding job a person can have, and the way my face lit up when I talked about biology was the way she lit up when she was an undergraduate.”

Natalie followed her physician’s advice, and today she is a trained emergency medical responder and volunteers in the emergency room at Valley Presbyterian Hospital in Van Nuys.

As a CSUN student, she’s balancing those responsibilities and her major’s course requirements while exploring and embracing all parts of her heritage. Natalie’s family is a unique blend of Israeli, Cuban and Moroccan. An African Studies minor, Natalie is also the president of CSUN Students for Israel, and last year she founded Tikkun, a social justice organization. Last spring, Tikkun led a project to self-publish “Our Story: Behind Closed Doors,” a collection of student stories of emotional, sexual or physical abuse.

While Natalie and Shannen have both had a lot of success in their college career, it hasn’t all been rosy.

“I didn’t do well in my first chemistry class,” Natalie says.

Early on, Shannen struggled to balance her schedule. To alleviate the financial burden of tuition for her family she took several part-time jobs

“I was working close to 40 hours a week as a freshman,” she says. “I can’t even describe how stressed I was. I remember it was Black Friday and I worked 12-6 a.m. and then I had a 30-minute break and went to my other job all day.”

Eventually Shannen learned how to prioritize — she now manages to fit work, research and classes into her schedule — and Natalie made it through chemistry. While there will be more challenges ahead, including medical school exams and residency programs, by staying focused, both Shannen and Natalie feel prepared to handle whatever comes next.

“The end goal is what keeps driving me,” Natalie says. “Knowing that I’m going to be able to save lives every day.”