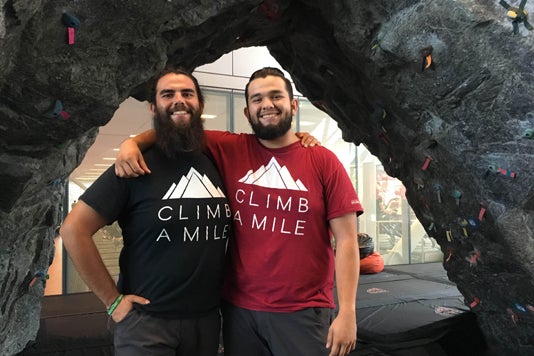 When Juan Carlos “JC” Cortez first gazed up at the rock wall in the California State University, Northridge’s Student Recreation Center (SRC) more than two years ago, it might as well have been the peak of Mount Everest. Today, it’s more like looking at an old friend. Both JC and his brother Joey discovered a passion for rock climbing at CSUN, and now they’re teaching others how to enjoy the sport safely.

JC fell in love with rock climbing immediately after trying it for the first time at the SRC.

“When you climb something difficult you leave the world behind,” he says. “It’s just you versus the wall.”

Climbing has become such a big part of JC’s life that he took a job working at the SRC rock wall in October 2014. Today he is a Professional Climbing Instructors Association- certified instructor, and Joey will receive his certification in the next year.

“Finishing a tough climb brings a huge sense of accomplishment,” JC says. “The wall is where I meditate.”

“It’s given me the determination to try something that I wouldn’t think I would be able to do,” Joey says. “I’m more confident and social.”

Climbing has helped him get into better shape physically, and this fall he’s hoping to complete an SRC challenge: 115 climbs by the end of the semester.

JC, on the other hand, is looking forward to more outdoor climbs, perhaps even the famous El Capitan, or one of the other world-famous rock walls in Yosemite National Park.

The brothers, who grew up in the San Fernando Valley and learned a lot about hard work and family from their father and grandfather, are also avid motorcyclists. Whether they’re on their bikes or on the wall, being together is a big part of what makes the activity so rewarding.

“When we are together, we build off each other’s energy and push ourselves further than we ever could on our own,” JC says.