For Armen Arslanian, one California State University, Northridge experience was literally out of this world. 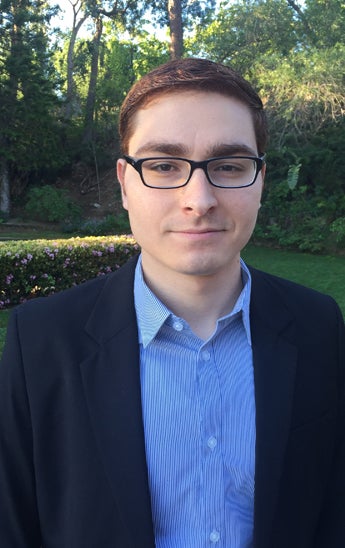 9:15 p.m., Wednesday, May 17, was a special moment for Armen Arslanian. At that exact time, he witnessed and celebrated the launch of CSUNSat1 , the culmination of many months of hard work. Developed by NASA’s Jet Propulsion Laboratory (JPL) in partnership with CSUN faculty and students like Armen, the small, cube-shaped satellite has been a first for both him and CSUN.

“It was very exciting to see it finally deploy and work successfully,” Armen says.

CSUNSat1 began in 2013. The mission: Test a new type of battery capable of performing at lower temperatures. Armen joined the project in June 2015 after gaining research experience through STEPS (Students Targeting Engineering and Physical Science). Funded by the National Science Foundation, the program was created to boost the number of CSUN graduates in the natural sciences, mathematics, engineering and computer science.

Now a senior computer engineering major who has received department scholarships, which covered the majority of his tuition for each of the past three years, Armen was brought into CSUNSat1 after meeting with its principal investigator.

“More than 70 students worked on [CSUNSat1], but not all at the same time,” he says. “I feel lucky to have been able to see the project to its completion.”

His interest in both the software and hardware components of technology made Armen an ideal fit for CSUNSat1. He didn’t really dive into the world of computer software until high school, but his passion for engineering goes back to building models as a young child with his father, who is also an engineer.

“With the computer engineering curriculum here at CSUN, I am able to take classes in both [hardware and software],” he says.

Assigned to develop CSUNSat1’s antenna deployment software, Armen’s challenge was finding a way to make the software recoverable if it were to become disrupted by radiation while in orbit.

“[As an engineer], you’re constantly facing problems,” he says. “If you can’t make the optimum solution work, you have to look at the tradeoffs and make your decision based on that.”

Looking ahead, Armen is not putting any limits on how far his education and experience might take him ― but he’d like to continue working on space and aeronautics projects like CSUNSat1. This summer, he has an internship at Teradyne, writing software for semiconductor test products.

“Since CSUNSat1 was very much like a project done in the industry, I felt ready to work in this area as I started my first internship [working on radar software at Harris Corp.] last summer,” he says. “It was like having a real job before graduating college.”