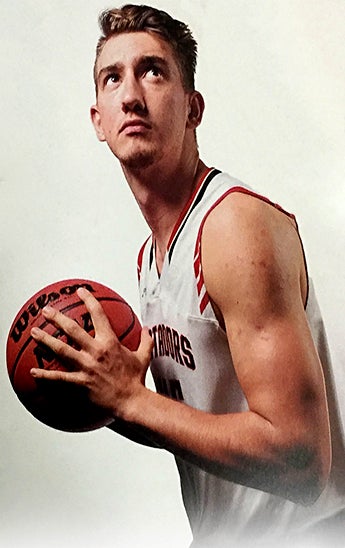 Starting center for the California State University, Northridge men’s basketball team, Dylan Johns is a powerful force on the hardwood. Sports have always been at the center of his life, and Dylan’s passion for athletics also fuels his independent spirit and drive to excel in the classroom.

While most of his teammates likely grew up watching NBA superstars such as Kobe Bryant from a young age, Dylan didn’t discover basketball until he was a teenager. Growing up in Ipswich, England, he was passionate about rugby. Then, at age 13, a growth spurt suddenly made Dylan a natural fit on the basketball court. Basketball isn’t nearly as popular in the United Kingdom as it is in the United States, so when coaches recognized his raw talent, Dylan was able to advance quickly. Within a year he was playing on a national team.

“It’s changed a lot in 10 years and grown immensely,” Dylan says. “Now basketball is televised, but when I was growing up you had to leave England to make it [in basketball.]”

Dylan did leave his home country. At 15, he left his family and accepted an opportunity in Spain to finish high school and continue to improve his game.

“Rugby culture pushes you to become independent, and I’ve always really wanted to be seen as an adult,” Dylan says. “[Leaving home for sports,] I wanted to prove that I could succeed on my own.”

When he was recruited to play college basketball there was no question that Dylan would take the offer. He played at Texas A&M before transferring to CSUN for the opportunity to become a starter.

As a Matador, Dylan has worked hard to prove himself a force on the court. At 6’11, he leads the team in field goals, shooting 60 percent, and blocks, 25 total, for this season.

Dylan hopes to one day pursue basketball professionally, but as a Spanish major he is just as passionate about pushing himself academically.

“Four years ago, I never would have imagined writing 20 pages in Spanish,” he says. “People underestimate how hard student-athletes work. If we want to succeed in life after sports we have do to well academically while competing athletically.”