California State University, Northridge theatre students know that the art of storytelling involves challenging the bounds of convention while honoring the rich traditions of drama. Their knack for fearlessness in performance, freedom in creativity and respect for the stage won awards Feb. 14 at the 2016 Kennedy Center American College Theater Festival in Honolulu. 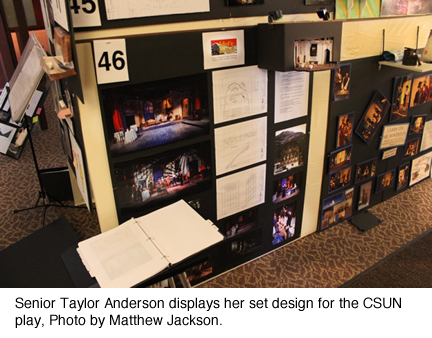 The performance — a physical theatre piece devised by CSUN theatre students and CSUN theatre professor Shad Willingham — explored the theme of the festival, “when past and future collide.” In a devised performance, actors and a director participate in the creative process together, which offers a different kind of theatrical experience than a traditional scripted play.

“Devised pieces are about shedding all the rules and creating your own,” Craighead said. “It’s a collaborative art. You take all the rules you think you know about a theatre piece and you just forget them, and it can be abstract or literal. That’s why so many of these pieces are different from each other.”

“Two Worlds/Two Roads” was abstract and used bodily expression to tell a story.

“Physical theatre is not so much acting as much as it is just movement,” said Vaknin, president of the CSUN Physical Theatre Club. “You are embodying the story rather than telling it through dialogue.”

The students brought their personal experiences as women to the piece, which was about breaking free from fears, restrictions and gender oppression.

“When we started devising the piece, we came up with movements and poses as a group,” Mack said. “As we were devising, I think we all recognized what it was becoming. We were exploring the struggle of women, of finding our voices and breaking out of whatever mold that we found ourselves in, and it was very personal.”

Porter said she believed they won the award in compassion and risk taking because their piece was very abstract compared to the other entries.

“We didn’t have any set pieces, just a couple props — we were our own instruments and we didn’t have a lot of dialogue,” she said. “It was all movement based and I think that was the risk that we took.”

The team, made up of five women and two men, used only two props for their performance — plastic wrap and lipstick.

“All the women, at the beginning of the piece, had Saran wrap around a part of their bodies,” Craighead said. “Some of us had it on our arms, torso or legs. We did the majority of the piece with the Saran wrap on us. We went around the men, and they used lipstick to draw X’s on our mouths. The moment of empowerment was when we ripped the Saran wrap off and wiped the lipstick off and took our hair down. We were shedding our restrictions.”

Almost every movement was created by the students, and their personal investment in the storytelling translated well to the audience, Willingham said.

“I told them their movements should be drawn from something specific,” he said. “It could be their own fears or limitations, not just something outward. It was about allowing them to accept themselves the way they are. One of the judges who saw the performance commented on it, and everything he said was something we discussed while creating the piece. It was really abstract, but he picked up on almost every single image.”

Willingham said the festival was a great opportunity for students to find inspiration and community.

“It’s a little world of all the theatre geeks coming together in our region, like Comic-Con for actors,” Willingham noted. “We come together, we share our passions, we network, we perform, we take classes and it’s always interesting and exciting. When students come back from this experience, they are changed.”

Senior Taylor Anderson received an honorable mention for her set design of “Idiot’s Delight,” attracting attention from a recruiter for the University of Idaho’s graduate program in theatre.

“It was an amazing feeling to place in the competition,” said Anderson, who was the first CSUN student to compete in scenic design. “I originally participated in the event just for the experience alone, but placing was icing on top of the cake.”

Over the years, several CSUN students have made connections and found professional opportunities after showcasing their talents at the festival, said theatre professor Matthew Jackson, who served as a faculty liaison for the competition and accompanied the students to Hawaii.

“You take your students out of their comfort zone, and folks are going to take notice,” Jackson said. “It really raises the visibility of CSUN theatre.”

Jackson said the department encourages students to engage in theatre work as much as possible by participating in productions throughout the year and going to events such as the festival.

“We produce a large number of shows for the size of our department — we have just under 250 majors, but we do four shows per semester,” he said. “There’s at least a six-week rehearsal period and then two weeks of performances attached to each one. We aim to provide our students with as many opportunities as we can so they feel prepared to enter the highly competitive world of professional theatre. We teach them to shine both onstage and backstage.”

Anderson said the support of the department’s talented faculty and staff helps students develop a passion for storytelling and makes it possible for them to — as the festival judges recognized — be creative, take risks and be confident in transcending boundaries.

“Ultimately, it’s up to the student to become a sponge, get involved on any show that they can and constantly try to perfect their craft,” Anderson said. “CSUN has taught me to believe in myself, to not settle for something that doesn’t allow me to challenge myself, and have confidence in my work and work ethic. Because at the end of the day, what employer will believe in you if you don’t believe in yourself?”