Haves, comic act designer and casting partner for Cirque du Soleil, found his passion for comedy and non-language based performance while he was enrolled in Antonin Hodek's mask, mime and movement course at CSUN. Photo courtesy of Stefan Haves.

Stefan Haves ’82 (Theatre) wanted to create something universal, something that would be relatable no matter the audience. With that goal in mind, he realized his creation would have to be nonverbal.

His answer? Back Man. 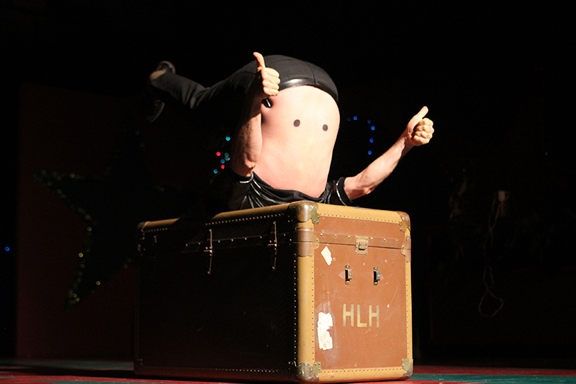 Following his passion for non-language based performance, Haves created a silent comedy contortion act called Back Man.
The act, which Haves has performed internationally, won him $10,000 from a television show titled America's Funniest People.
Photo courtesy of Stefan Haves.

Haves begins this act by taking a seat on a block. Then, he removes his shoes, dropping each on the floor with a thud. He places his hands at the edge of the block, grabs onto it, takes two quick breaths, and swings his legs back and over his head so his back is facing the audience but his head is hidden — they laugh every time. Then, he pulls down his shirt to reveal two black dots on his back: his new eyes. His transformation is complete — Haves is now Back Man.

Haves twists from side to side. Back Man “looks” to the left and then to the right, inspecting his audience. He shrugs. He pounds his fists in frustration — how can he communicate with the audience with no mouth? He raises his finger — he has an idea!

He grabs a pen and a notebook and scratches his “head,” as he ponders what to write. He thinks he’s got it, so he scribbles the idea but rips the paper from the notebook, crumples it and hits himself on the head for thinking of such a silly idea. And then … he’s got it! He writes excitedly and turns the notebook to share the message with the audience: “bye.”

Haves’ creativity and love of performance landed him a job as comic act designer for the world-famous Cirque du Soleil, which uses acrobats, dancers, clowns and contortionists to tell stories. One of Cirque du Soleil’s most defining characteristics matches Haves’ passion: non-language based (or nonverbal) performance.

“Non-language based performance is global, not regional,” Haves said. “You can go to an improv show [in Los Angeles] and say something about the Kardashians, and everyone is going to laugh, but if I take that same joke to a festival in [another region], that’s not going to work. The interesting challenge to physical theatre and non-language based performance is finding out what we can show that will resonate with everybody.”

Haves has performed his Back Man act internationally, accomplishing his goal and winning $10,000 on the television show America’s Funniest People. He also served as a creative consultant for David Shiner’s Tony Award-winning silent clown show Fool Moon and created an adaptation of Jack London’s novel The Call of the Wild, in which Haves used stilt walkers and masks to portray the tale’s humans.

Haves, who joined Cirque du Soleil in 2006, said working for the theatre titan is “a dream come true, in that you can say, ‘I want a 500-pound, 30-foot shoe,’ and they will build it for you. The [possibilities] are amazing. But, of course, you have to follow through and be good.”

As a comic act designer and casting partner for clowns and characters, Haves begins his work by working with creators to flush out a storyline as well as visual and musical themes. Once the storyline is finished, the team creates characters which they cast shortly thereafter. Once the cast is finalized, Haves attends meetings and rehearsals until opening day.

The path wasn’t always clear for Haves. His passion for performance, he said, was ignited during his sophomore year at California State University, Northridge, when he met an inspirational theatre professor.

“I was an undeclared major as a sophomore,” Haves said. “My teacher, Antonin Hodek, was amazing and was a national treasure from Czechoslovakia. He taught a class called Mask, Mime and Movement, which was not one of your regular theatre classes. When I saw this guy and took his class, I realized that physical theatre is what I wanted to do.”

After college, Haves was torn between pursuing his passion for comedy and completing a Master of Fine Arts program he’d started at Brandeis University. Eventually, he moved to Paris, where he worked as a juggler and street clown. As fate would have it, Haves caught the eye of Shiner, the acclaimed Cirque du Soleil writer and director. Shiner, one of the best clowns in the world, according to Haves, asked the street performer to work with him on Fool Moon after seeing Haves’ unique vision and style.

Years later, the two continued their professional relationship, working together on Cirque du Soleil’s KOOZA. The show, which marked a return to the organization’s roots, follows the Innocent, a naïve and childlike clown who is pulled into the world of the Trickster, the clown who created the KOOZA world.

In the KOOZA world, audiences see acts like contortion, high wires, aerial loops and a 1,600-pound Wheel of Death — powered only by the two artists who leap and counter-rotate in a display of acrobatics and teamwork — which is positioned diagonally, starting at stage left and ending at stage right. The act is a break from the usual symmetry of performance and audience, bringing the action as close as possible to the audience.

Not Just Clowning Around

In recent years, Cirque experienced the audience’s reticence towards clowns. Haves is writing a book, Cirque It, about bringing the spirit of Cirque du Soleil into everyday life. It includes a section on coulrophobia (the fear of clowns), in which he explores the reasons people are afraid of clowns.

“I get why people are afraid of clowns,” Haves said. “Our culture has demonized clowns: Clowns are equated with serial killers like John Wayne Gacy. In the 1970s, Woody Allen began beating up and making fun of mimes. Then you have Stephen King, who uses clowns to kill and scare people, and then you have a culture in which there’s no money or return on being a clown.

“I did a clown show where I didn’t dress up,” he continued. “I dressed casually, juggled and brought people on stage, and I made them laugh. Afterwards they asked, ‘Are you a clown?’ and I said, ‘Did you laugh?’ Everyone said, ‘Yes,’ so I said, ‘Then I’m a clown.’”

Beyond his work with Cirque du Soleil, Haves teaches clown classes, employing exercises Hodek taught him at CSUN, such as physical and technique exercises aimed at maximizing the body’s efficiency.

“[I teach my students] how their physical instrument can express at its optimal level,” Haves said. “It’s like how we take for granted that our hand can just express ‘stop.’ It’s how you move your hand to express yourself physically and with intention.”

“CSUN was amazing for me,” he said. “It gave students a lot of latitude for creativity and creation if you were motivated.”

For a complete list of Haves’ work, visit https://www.linkedin.com/in/stefan-haves-0011484/ or https://www.stefanhaves.com/.