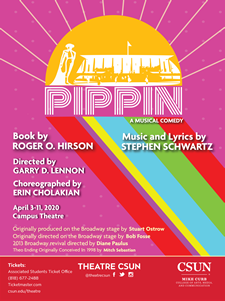 Pippin, the Tony Award winning musical by four-time Grammy winner and composer of Wicked and Godspell, Stephen Schwartz, is the story of a young man in search of his purpose. Through his journey, Pippin is led down multiple paths where he discovers that glory, fame and happiness come at a cost.