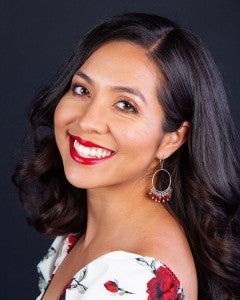 In a summer and year when America is experiencing the most widespread civil unrest since the 1960s — and a global pandemic — music is a balm for millions and a force for change. New CSUN graduate Xochitl Hernandez may be uniquely positioned for this moment in U.S. history. Hernandez, the daughter of LAUSD teachers who met at CSUN, was valedictorian at Northridge’s James Monroe High School just four years ago. In May, she completed a Bachelor of Music in vocal arts, with an interdisciplinary minor in Spanish-language journalism. As a CSUN Presidential Scholar, she earned a 3.8 GPA.

Hernandez is passionate about music and the arts, and using them for social advocacy and to empower others. She dreams of becoming a professional singer and a multimedia journalist.

“Xochitl has a gorgeous voice and is capable of performing a wide range of musical styles, from classical opera to musical theatre with equal assurance,” vocal arts department Chair Diane Ketchie wrote in a recommendation for Hernandez. “As a result of [receiving CSUN’s] Presidential Scholar award, she has started her own podcast entitled, ‘Notes from Her,’ which focuses on interviewing women of color in the world of classical music. By thinking outside of the box, Xochitl found a very creative way of combining her two passions.”

During her four years at CSUN, she endured many personal obstacles, Hernandez said. Despite struggling with insomnia, anxiety and health issues during her senior year, she was active on and off campus. She interned at Los Angeles Opera and completed her “Notes From Her” project, while earning straight A’s. She also worked on campus at the Student Recreation Center, performed in CSUN operas, served as an anchor and reporter for CSUN’s “Valley View News” and El Nuevo Sol. In student government, she represented the Department of Music, and she was involved in Shepherd Church’s Young Adults and Worship Music Ministry.

As she reflected on her final semester — the one where nothing went as planned for CSUN seniors — Hernandez’s pride was clear.

“CSUN was the place I rode my bike at as a little girl, when my parents were in class getting their teaching credentials,” she said. “[It] was not only the place that shaped a part of my family’s legacy, but it grew to become my home away from home — with my wonderful professors, peers, opportunities, and an education that enabled me to become a classically trained singer, performer, multimedia journalist, news anchor, and empowered Latina. My journey and degree at CSUN has meant everything to me because it helped make dreams I didn’t even know were possible come true.”