Reposted from CSUN Today. Written by Alex Ferreyra on October 6, 2015 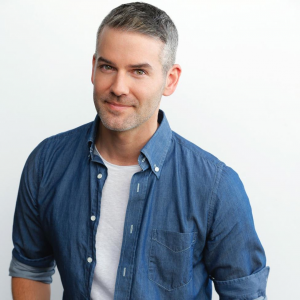 “Go West, young man,” was a popular refrain in the mid-1800s, a call to continue the westward expansion that had feverishly gripped the United States. It began a great migration to places like California, where the sun in the sky was said to always be shining as bright as the gold in the dirt. It would take a few decades, but the gleam of the gold would be replaced by the siren song of Hollywood. That song is the one that called Andrew Strauser ’97 (then RTVF, now CTVA) west to seek his destiny.

Not long after graduation from California State University, Northridge, Strauser struck gold in the entertainment industry. He worked his way up the proverbial Hollywood ladder to become vice president of talent development and casting for TLC, bringing personalities such as “Cake Boss” Buddy Valastro to the masses. But, like many people trying to break into the industry, it was a struggle getting there — from the month he arrived in California.

“I went to high school in Dallas and then started college at the University of Mississippi,” Strauser said. “After three semesters there, I realized I wanted to work in entertainment and felt like I needed to be in Los Angeles to make that happen. So, I loaded up my car and drove to L.A. — two weeks before the [1994] Northridge earthquake. Crazy timing.”

Strauser’s Hollywood dreams got a rude awakening when Northridge shook in the early-morning hours of Jan. 17, 1994. It didn’t shake the resolve of the boy from Covington, La., though. He knew CSUN had an excellent film and television department, and that was enough for him.

“I remember the admissions building was in a tent, as were many of the others, but I remember feeling so lucky to be there,” he said. “I always wanted to live in California and couldn’t believe that I was actually doing it. I didn’t know a soul, but I was at a California State University studying film and television. It was a dream come true for me.”

Learning the world of film and TV from professors such as Karen Kearns and Alexis Krasilovsky broadened Strauser’s idea of what he could do — because, like many undergraduates, he said, had no idea. He did know where he wanted to focus his talents: TV. Soon after graduation, he found himself at NBC as a production assistant in the promotions department, before bouncing around various other TV gigs. Finally, he found himself an assistant job at a talent agency, a move that would guide him the rest of his career.

“That’s what launched my career in talent,” Strauser said. “I worked at that agency for almost five years. From there, I transitioned into casting, then [became] an independent casting director for six years — and now have been at TLC for seven.”

At TLC, Strauser oversees all of the talent development and casting. That varies from day to day, and he wouldn’t have it any other way.

“What’s so exciting about working at a network is there’s no such thing as a typical day,” he said. “But if I had to boil it down, whether it’s development, production and pitch meetings, SKYPE-ing with potential talent or conference calls with agents and producers, I’m constantly interacting with creative and talented people all day, every day.

“It takes a lot of work and effort to get a show on the air, and being at a network, I get to see that process from the moment the idea is green-lit,” he continued. “It’s truly fascinating, and I love it.” Although it was a long and hard climb to get where he is, he believes it was worth it. It’s a path he says any Matador looking to get into the behind-the-scenes world of television production should take.

“Do it,” Strauser exclaimed. “People consistently tell me in and outside the business that I have the best job — and I have to agree. I get to meet people from all over the world, from all walks of life, and think about ways to make television shows with and about them. It’s humbling and rewarding to think that the shows we create are enjoyed by millions of people. And, talent and development is a key part of the creative process — every show needs a cast, right? Why not be the person who finds them?”

In addition to the international success of “Cake Boss” Valastro, Strauser is very proud of his newest crop of TLC stars, such as style experts Robert Verdi and Gretta Monahan on Brides Gone Styled and Tai Beauchamp on Dare To Wear. And no matter how the TV landscape changes in the next decade or so, Strauser said he believes shows and talents like these always will be in demand.

“At the end of the day, it’s all about creating compelling and entertaining content that people will want to watch,” he said. “That’s never changed.”