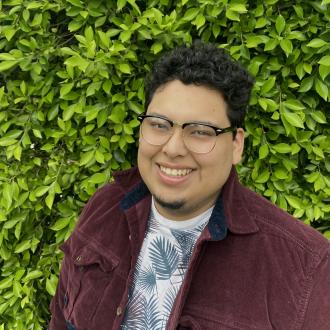 Theatre major Rody Villegas is the inaugural recipient of the Milt and Debbie Valera Mike Curb College Scholarship. This scholarship fund, part of a generous $11 million gift from the Valeras to CSUN in late 2020, targets students across disciplines of the Curb College who distinguish themselves through exceptional academic performance and dedication to extracurricular campus and community service.

Now a senior looking forward to graduating in spring 2022, Villegas has confronted pandemic challenges with grace and determination. When his study year abroad came to an abrupt halt in spring 2020, he might have been devastated. It had been such a rare opportunity for a sophomore, and Villegas lobbied hard for it, hand-delivering a binder outlining his qualifications to the California State University International Program at the chancellor’s office in Long Beach. He laughs these days at his outsized gesture, but who knows whether he would have otherwise been chosen to study with the 2019-20 cohort at London’s National Theatre? While there he immersed himself in the world-class local scene and was set to premiere his own show at Kingston’s International Youth Arts Festival, but then live performances went dark and U.S. students studying abroad were called home.

On returning home to Northridge, where he was born and raised, Villegas thought about ways to build community among isolated theatre students. As Vice President and Artistic Director of CSUN’s Theatre Guild Club and as ambassador for the Department of Theatre, Villegas has honed his natural leadership instincts, inspiring peers by modeling dedication to craft. The prior year he had teamed with classmate Alejandro Jimenez to found Zanni Theatrics, an online platform supporting emerging theatre artists, diverse voices, and socially relevant storytelling. As Zanni’s director of production, Villegas reached out to his peers to solicit original radio plays that could be produced as podcasts. He organized virtual rehearsals as well as distanced in-person table reads. Over the 2020-21 season dozens of CSUN students participated in Zanni radio plays as writers, directors, and performers. Villegas and Jimenez, together with their CSUN peers, established safe space for collaboration and maintained creative momentum in a time that promoted stasis.

That kind of service to professional communities is key to the Valeras, who created their named endowment at CSUN in recognition of the part it played in Milt’s development as an industry innovator. Milt Valera graduated CSUN, then known as San Fernando Valley State College, with a journalism degree in 1968. After working for L.A. metro newspapers and his own public relations and marketing agency, he went on to serve the National Notary Association for 50 years, including decades as president and CEO. Along the way he and his wife, Debbie, reinvented the notary industry as we know it, unifying protocols state by state to streamline nationwide performance expectations. The Valeras’ many endowments extend that transformational spirit to current and future generations of CSUN students in disciplines across the university.

Villegas brings similar transformational vision to his craft. His interest in drama and theatre began in high school at Centers of Learning in North Hills, where he initially embraced set design. He enjoyed the precise work and effort involved in making stage settings that transport audiences. Then he tried his hand at writing for a film class, but he ultimately found playwriting more rewarding. “There’s just something about playwriting that thrills me,” says Villegas. “You’re not writing a stagnant piece, it’s a living document that will come alive every time it’s performed, and always different than the last time.”

These days, Villegas can take on practically any facet of a stage production, but he gravitates toward writing, producing, and directing. In addition to his work for Zanni Theatrics and the CSUN Theatre Guild, he was recently selected to intern with the Independent Shakespeare Company, serving as prop master on their August 2021 production of The Tempest in Griffith Park, among the first in-person shows to be staged in Los Angeles since the start of the pandemic. He’s augmented his studies at CSUN and the CSU International Program at Kingston University with theatre intensive courses at the Stanford Summer Arts Institute and the Cambridge University Scholar’s Programme. Still, Villegas notes that the pandemic brought its own lessons. As much as he thrives on that opening night energy in the moments before the curtain goes up, the shuttering of live theatre spaces emphasized that people are at the core of every performance. “If you put people above product,” he says, “the product will excel.” Villegas and Zanni cofounder Alejandro Jimenez leaned into that community and reimagined the spirit of theatre, uplifting their peers and themselves when they needed it most.

Moving forward, Villegas sees himself furthering work in progress to diversify theatre, not just through casting but by putting historically underrepresented voices front and center. He sees theatre less as an escape than as a way to highlight LGBTQ+, Latinx, and immigrant stories and to address uncomfortable topics like mental illness, death, and suicide. The key, Villegas says, is giving viewers space to breathe around moments of catharsis, creating a dynamic interplay between the goals of creators and the needs of audiences. He notes that the European Renaissance flowered in the wake of social, economic, and cultural changes after devastating losses to the bubonic plague, or “black death.” Whatever changes may come as we recover from this latest global pandemic, artists like Rody Villegas are poised to respectfully honor the voices of the marginalized and the dispossessed in efforts to uplift us all.