When California State University, Northridge alumnus Roger Zuch ’73 (Journalism), ’75 (History) started reading Sherlock Holmes books, he was just a teenager with a thirst for the fictional detective’s crime-solving adventures. Forty years later, when he began to dabble in writing those stories himself, it was a momentous, creative jump that led Zuch into a second career — helping sustain the legend of Holmes, who has been referred to as “The Man Who Never Lived and Will Never Die” due to his enduring popularity.

The famous fictional duo, private detective Sherlock Holmes along with his assistant and biographer Dr. John H. Watson, have created lasting ripples in the world of literature as they ingeniously solve mysteries — ones that are complex to the layman but are merely “elementary” to Holmes himself — through logic and deduction for different clients, including the London police in Scotland Yard.

It all began when Zuch discovered the “Sherlockian E-Times,” an online publication and community for fans of Sir Arthur Conan Doyle’s timeless fiction. Scrolling through the website in 2010, looking for stories to read, led him to stumble upon a collaborative project on the “E-Times.”

The project involves a single premise, proposed by a member of the online community. Other members may take that premise and start writing a larger story, contributing chapter by chapter. Zuch was hooked and decided to contribute. It was the first of many Holmes stories Zuch would eventually write.

“One of the [stories] got to the point where I was the only one contributing,” Zuch said. “So, I ended up writing probably 80 percent of the story. And that caught the eye of some people out in the publishing world.”

Under the pen name Roger Riccard, Zuch has written and published six books (so far) that continue the Holmes saga. Remarkably, his second novel, “Sherlock Holmes and the Case of the Twain Papers,” was featured in The Museum of London’s “The Man Who Never Lived and Will Never Die” exhibit, which ran from October 2014 to April 2015. The exhibit explored the legendary, fictional detective’s evolution from Conan Doyle’s original book series (starting in 1887), to film and TV adaptations, including notable memorabilia such as Benedict Cumberbatch’s coat from the recent BBC series, “Sherlock.” Zuch’s novel was selected among other published literature that successfully showcased Holmes’ enduring legacy and popularity in modern literature. 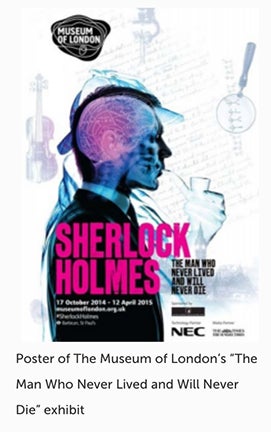 Zuch is currently working on the third book in a series entitled “A Sherlock Holmes Alphabet of Cases,” a collection of Holmes short stories with titles beginning with each letter of the alphabet. The second volume of the series was released in November 2018. When that series is completed, he will have over 40 Holmes stories to his credit.

Just like Holmes’ adventures, Zuch’s journey to become an author came with many twists and turns. As an undergraduate at CSUN, then known as San Fernando Valley State College, he majored in journalism (and eventually completed a second Bachelor of Arts in history). Zuch joined the staff of the student newspaper The Daily Sundial, writing passionate sociopolitical commentary and drawing engaging editorial cartoons about the turbulent times of the early ’70s.

Writing remained central to his career after college. Zuch taught high school creative writing at Village Christian School, where he also coached the varsity baseball team. Even in his later work in Human Resources, which he has been in for 35 years, and now as an HR manager at Information Technology Partners in Burbank, he uses his talents to write policies, procedures and newsletters, among other business literature.

Newsletters and instruction manuals, however, weren’t nearly enough of an artistic outlet for the creative Zuch, who also occasionally dabbles in theater and sings with in the Crescenta Valley High School Alumni Chorale.

“When you’ve got a creative heart, you’ve got to let it out some way,” Zuch said. So now, to “fill up that performance void,” he said, he writes stories about his favorite literary character.

His excitement about the century-old novels was galvanized when American author Nicholas Meyer’s pastiche — writing in a style that emulates the work of another author or period — “The Seven Per-Cent Solution,” was released in 1974. Zuch called the novel “a new breath of life” for the Conan Doyle stories. “That encouraged me. Sherlock Holmes stories can be written now. I just kept an eye out for more and more as they came along,” Zuch said.

The British TV series “Sherlock Holmes,” which ran from 1984 to 1994 and starred Jeremy Brett and Edward Hardwicke, also served as key inspiration for Zuch, who took special note of Hardwicke’s portrayal of Watson. A strong grasp on Watson’s character is important for Holmes pastiche writers like Zuch, who try to imitate Doyle’s creative style — that is, writing under the guise of Holmes’ prime confidant. Many of them, including Zuch, employ a literary device they call “The Great Game,” wherein they assume Watson and Holmes were real people, and that all their stories are actual unpublished manuscripts written by Watson himself.

“Edward Hardwicke nailed the Watson character, as I always saw him from reading the books,” he said. “I wanted to keep that caricature of Watson going in the stories I write.”

As he learned to blend the influence from this adaptation with his own sense of humor (through Watson’s perspective), Zuch found a newfound confidence in his writing when he began contributing to the “Sherlockian E-Times.”

“I knew I had an idea for a full-on book, which was ‘Sherlock Holmes and the Poisoned Lilly,’” Zuch said. To take that idea from seed to shelf, he contacted the late Joel Senter, publisher of the E-Times, who shared a key contact in London.

That contact was Antony Richards at Baker Street Studios, a Cambridge publishing house specializing in murder mysteries that since has published all of Zuch’s completed books. Richards also serves as one of Zuch’s consultants when it comes to historical accuracy.

“If I have questions about something about Victorian times, I’ll check with Antony,” Zuch said.

Zuch also has an invaluable resource in David Marcum, who has served as an editor for a number of Holmes anthologies, including “Sherlock Holmes: Adventures Beyond the Canon” and “The MX Books of New Sherlock Holmes Stories,” both of which include short stories by Zuch. The proceeds of these anthologies, as well as the writers’ royalties, are donated to Sir Arthur Conan Doyle’s former residence in Surrey, England, the Undershaw House, which today serves as a school for students with special needs.

Zuch shared one example of the comedy that ensues when writers — and editors — strive for historical accuracy in Holmes tales.

“One of the recent stories I did for David Marcum had a scene where Holmes has this Victrola gramophone going in the parlor, and it’s pretty loud,” Zuch said. “It’s waking Watson up, who has been up half the night delivering a baby [and] hasn’t gotten enough sleep. And I [had] Watson coming in and turning the volume down. David got back to me and said, ‘I don’t think they had volume control.’ And I went back and checked, and at that particular time period, they didn’t!”

His first and best editor, however, is Zuch’s wife, Rosilyn, he said. She serves as first reader and editor on every one of his stories. Though both CSUN alumni who majored in Journalism, they missed each other by one year and the pair didn’t meet until 20 years later when Zuch joined a musical of which his eventual wife was the musical director.

“I jokingly refer to her as The Queen of the Commas, because she’s always making sure I get the commas in the right place!” he said. “She and I run ideas back and forth, and if I get stuck on something, I’ll throw it out at her and say, ‘Think on this and tell me how it should go.’”

“Riccard is actually my wife’s maiden name,” he said.

In the future, while continuing his work in human resources by day, Zuch said he hopes to finish his ongoing “A Sherlock Holmes Alphabet of Cases” series in his free time — and perhaps a spin-off series of short stories and novels.

“I’ve got an idea for another series. Same time period, a lot of the same characters, but with only occasional appearances by Holmes and Watson!” he said.

Zuch advised students and other aspiring authors to remember the importance of a day job, no matter the field.

“If you can find a job that you can earn a living at while keeping up your writing skills, consider yourself fortunate,” he said. He also noted that aspiring writers should not throw away unfinished or rejected manuscripts.

“Even if you don’t get published, keep at it, keep polishing stories,” Zuch said. “If you write something and you don’t do anything with it, put it somewhere and go back to it later. Read it again and see how you can make it better.”

Zuch also practices what he preaches as a storyteller:

“When you get to a point in a story where something seems like an obvious way to go, say ‘No.’ Don’t let your character go that direction,” he said. “Throw a roadblock out there, make something happen, and keep them from taking the easy way out. Then, figure out a way around it.”

Zuch’s works, under the pen name Roger Riccard, are available through Amazon and Barnes & Noble. His two-part short story anthology “Sherlock Holmes and the Twelve Days of Christmas” is available as an e-book from Endeavor Media, on Kindle.