With the speed of technological innovation and the blurring of media genres, career paths seem increasingly nonlinear. Students are looking to minors, double majors, or specialized degree tracks in pursuit of careers they imagine for themselves. And it's fair to say that students in the arts have long navigated a more circuitous route than their peers in more traditional fields.

Take the case of set designer and art director Mark Lucero ’83 (CTVA), whose film and television credits include Mission Impossible III, The Prestige, How to Get Away With Murder, Pretty Little Liars, and Alias. Lucero, currently the art director on Walt Disney Television’s Good Trouble, had targeted architecture school as a teenager until a calculus entrance requirement derailed his plans. He instead entered CSUN undeclared and soon followed his affinity for film and photography into the Department of Cinema and Television Arts (CTVA). His passions for spatial thinking and perception remained central. He felt strongly that set design was key to achieving the desired mood and emotional charge of media projects. CTVA didn’t offer a course that specifically addressed those skill sets, so he enrolled in a stage design course offered by the Department of Theatre.

Lucero certainly wasn’t the first non-Theatre major to improvise theatre design skills toward career goals, and Theatre professors Dan Weingarten and Garry Lennon eagerly welcome enterprising students from across the campus. They recognize that it’s not all that intuitive to pursue, say, an Art BA and a Theatre minor if your career goal is costume design, so they’d like to reach students interested in such technical fields earlier in their college careers. Weingarten, a lighting design professor, and Lennon, a costume and set design professor, say that students tend to discover theatre design courses in their third or fourth year at CSUN. Students with affinities for technical theatre arts may not even realize that there are careers that match their interests and courses of study that will hone those specific skills. 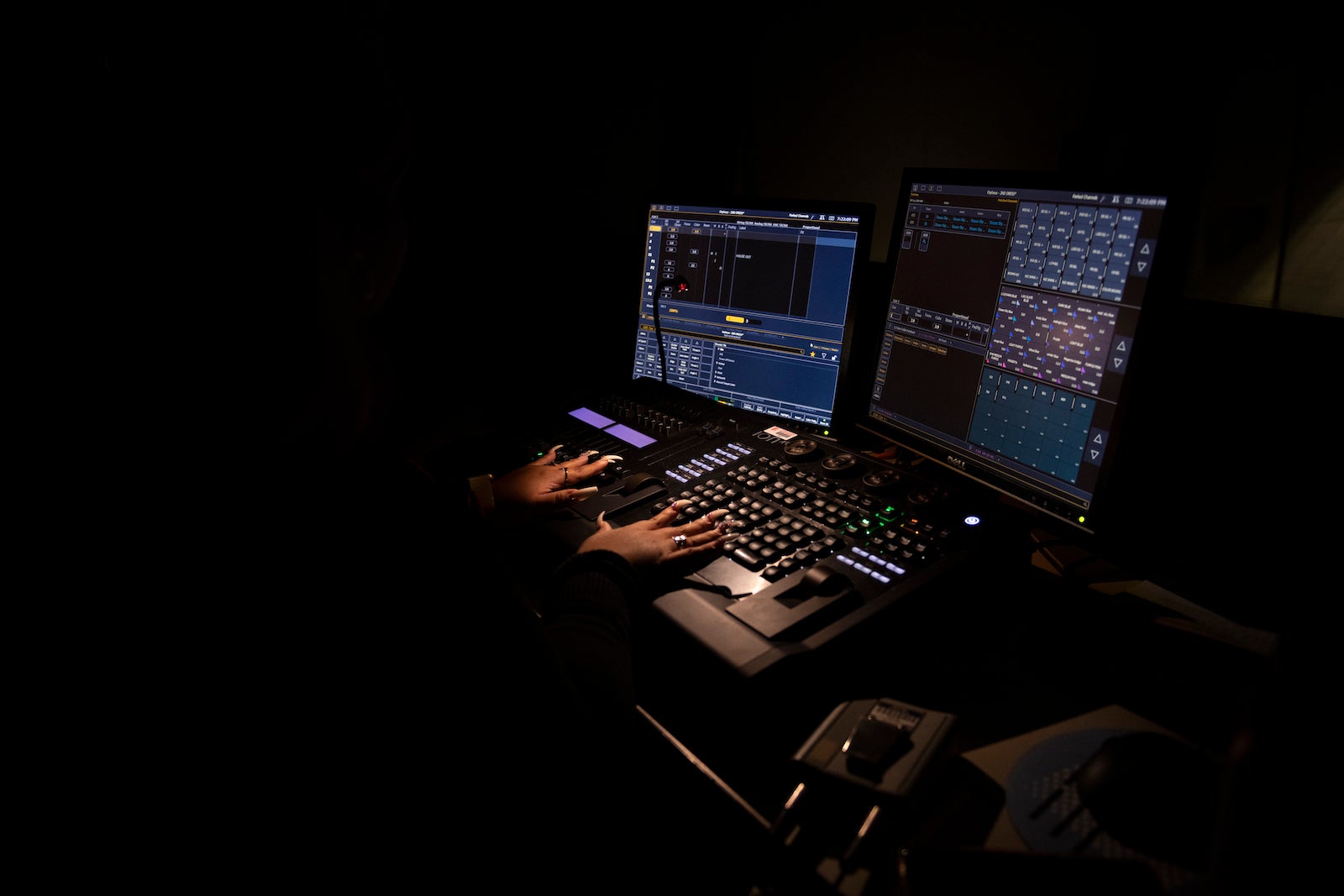 Student at lighting console for the Spring 2019 production Gem of the Ocean. Photo by Kenji Kang.

Theatre Design and Production has been offered as a minor for decades, but it was burdened by a high unit load, among which were performance courses that deterred the very students the minor targeted. A student focused on stagecraft arts is probably less excited about acting, movement, voice, and directing courses—and may even be terrified of public performance. Professor Weingarten, an industry professional with over 1,200 credits in entertainment and performing arts, says that he routinely meets individuals on jobs who mention that they had wanted to attend CSUN but didn’t want to take acting classes to learn how to light a set. “If random people are just volunteering that information when they meet me, imagine how many others we’re not hearing from,” Weingarten says.

The urge to revamp the Theatre Design and Production minor got an extra boost a few years back when Professor Thelma Vickroy, former chair of CTVA, mentioned to Weingarten that she’d like to send film and television students to Theatre to study set design and costuming. Weingarten and Lennon set to work streamlining the minor to more efficiently meet the needs of those with explicit interests in stagecraft, whether students wanted to work in theatre, film and television, fashion design, or any of the myriad fields that intersect with theatre arts

Weingarten notes that a significant number of successful film and television light and sound designers received their primary training in theatre. And he routinely sees his students go on to careers in event industries, where they make premieres and award shows sparkle. Other students find their niche in theme park consulting. Lighting is a matter of sculpting, Weingarten says, whether you’re sculpting light to highlight people, objects in a room, or the space itself. In his classes he focuses on the narrative aspects of lighting design. Sure, there are “industry standard” ways to light, say, a kitchen, for a TV shoot, Weingarten says, “but how do you light that kitchen to tell the story you’re trying to tell? Not necessarily by getting everyone in the scene in good light everywhere.”

Professor Lennon has seen more CTVA majors than usual in his pandemic-era classes; he theorizes that some may see this as a practical time to diversify their skill sets in areas less dependent on campus labs and studios. “In this time, why not add a minor?” he muses. Lennon also welcomes students from the Department of Family and Consumer Sciences majoring in Apparel Design and Merchandising, noting that costuming for theatre will delve into artistic areas that aren’t prioritized in the more industry-oriented major. “We create a different conversation,” Lennon says, and students who blend paths of study that complement their career goals can gain an edge on peers in more conventional majors. Shiku Thuo makes up Remi Truman for her role as “Caliban 3” in the Spring 2020 production of William Shakespeare’s The Tempest. Photo by Kenji Kang.

At the beginning of each semester Lennon surveys students to better understand their goals, as do Weingarten and makeup professor Elizabeth Cox. When they know who their students are and where they imagine their careers landing, faculty can cite variations in methods and approaches standard to various fields. But “standard” is only the beginning of that conversation. Lines between theatre, film, and television are getting blurrier in an era when musical theatre productions can be televised as live events and streaming series roll out red-carpet premieres. Weingarten and Lennon both feel that the time is right to reach out to students in other fields and find out what they might need from this minor. Surely there are untapped possibilities and opportunities for coalescence, especially in this time of flux. “It’s a hard moment right now,” Lennon says, “but it is an exciting moment, too, because we’re creating new art forms, like what we’ve been doing virtually, good or bad or indifferent, is creating new definitions and new terminology. And it’s the students who are learning their craft in the midst of this pandemic who will define it for themselves.”

You may be imagining that Mark Lucero graduated with his CTVA degree, found an entry-level job in the entertainment industry, and worked his way to the top as a set designer. But there were a few more stops along the way. After Lucero was stonewalled by major studios a family friend said he’d have to learn to draw to get his foot in that door. So he did, while earning his master’s degree at UCLA’s School of Architecture and Urban Design. After that he landed a career in theme park design for Walt Disney Imagineers and Universal—work he found immensely satisfying, but theme park gigs wax and wane as worlds are imagined and built. In the wake of a layoff, Lucero was delighted to be recommended as a set designer for a then-new television show called Providence, and the rest really is history. Lucero achieved his architecture goals and still managed to land his dream career working in film and television.

Students who are able to recognize such nonlinear paths to their end goals are more likely to achieve success, whether in the career they targeted or one they never even knew existed. There are careers in our near term that haven’t yet been imagined, and preparing to meet such a future requires some imagination from students, some improvisation from faculty, and a whole lot of perseverance along the winding road to success.

CTVA professor Elizabeth Leister is certainly doing her part to help CSUN students meet a developing future. Leister arrived at CSUN a few years back with an express mission to build an Emerging Media BA program. In founding the option, the Department of Cinema and Television Arts was responding to industry need and student interest in a degree track primarily focused on production fundamentals for storytelling in interactive and immersive spaces. While immersive experience in imagined or augmented 3-D environments is most closely associated with multiplayer video games, technologies are increasingly enhancing or disrupting theatre, documentary, advertising, and gallery spaces. In fact, audiences don’t always recognize the shifts. Subtler effects of augmented reality (AR) have become more common in manipulated environments than the more obvious headset-variety virtual reality (VR). Leister’s background in visual arts—emphasizing performance, drawing, video, and virtual reality—helped her craft a broadly inclusive program that would expand creative, technical, and professional options for students across disciplines.

Still capture from A Day at the Library, a 360-degree video project by Jesse Johannsen

Leister revamped an aging and underused computer lab into an experimental studio space to be equipped with portable, reconfigurable fixtures and industry-standard hardware and tools for motion-capture work. Keeping the program relevant requires adaptability and facility as new technologies emerge. CSUN launched the new program in fall 2020 with an inaugural cohort of 24 students. Leister is the only full-time professor dedicated entirely to the program, giving her latitude to call on industry movers and shakers to teach classes as needed. The instructors she brings to CSUN are simultaneously involved in productions outside the classroom, allowing them to use their real-time project experiences to illustrate collaborative problem-solving in the industry.

A student who opts for a degree track in Emerging Media is laying groundwork for ever broader creative and career possibilities in film, television, animation, gaming, art installation, theater and theme park design, scientific photogrammetry, and new applications that continue to emerge. The pandemic, too, has prompted expanded use and application of XR (an umbrella term for virtual, augmented, and mixed reality), with some awards programs and art and film festivals opting to innovate with such technologies rather than cancelling events. The venerable Cannes Film Festival responded both to pandemic restrictions and to shifting technologies by launching Cannes XR Virtual in June 2020, a three-day online and virtual event dedicated to immersive entertainment. 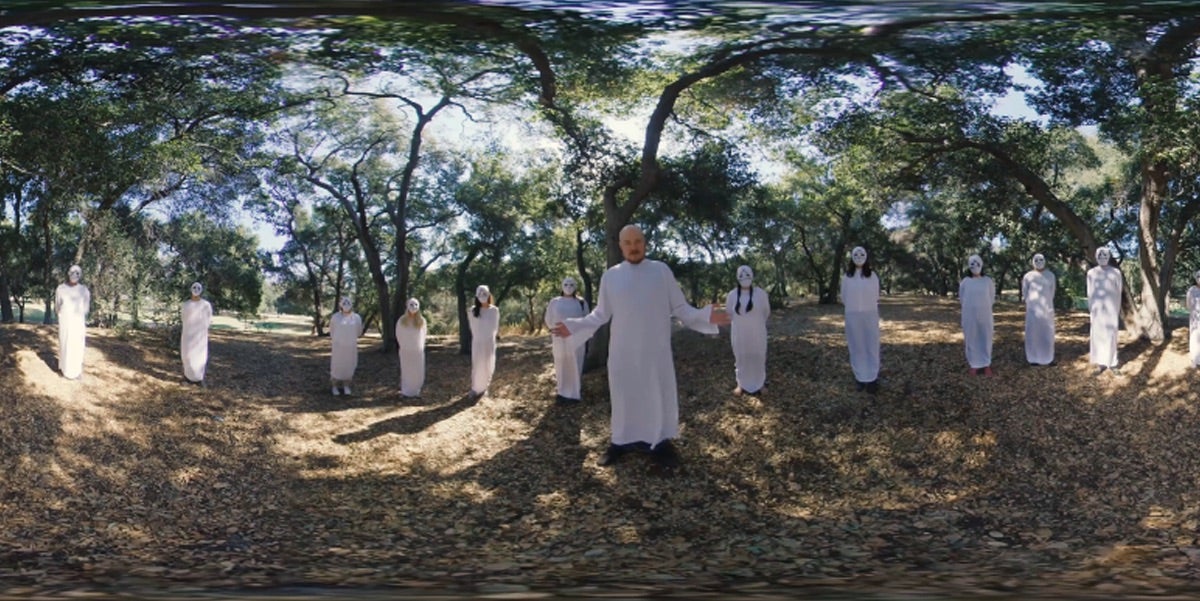 CSUN’s Emerging Media degree option is already gaining notice among media insiders. In its annual survey of the Best Film Schools in the U.S. and Canada, MovieMaker magazine in 2020 praised CSUN’s Department of Cinema and Television Arts for its addition of a “cutting-edge track” in Emerging Media, with its attendant promise to broaden competencies in interactive and immersive production technologies. Most important, students from lower-income households can access the kind of specialized training at CSUN that one might expect at private film schools.

Whether professors are retooling three-decades-old minors or building brand-new BA options, job one is flexibly meeting the needs of enterprising students amid shapeshifting career marketplaces. Leister notes that when she launched the Emerging Media degree option she was focused on recruiting enough enrollment to fill classes, but that hasn’t been an issue. Demand is strong, and she’s even seeing students arriving with their own VR headsets and other equipment. “It seems like this was a just-in-time option,” Leister says. In that sense, CSUN is right where students need it to be.