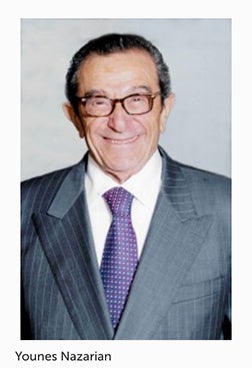 A leader in the Iranian Jewish Community, Younes Nazarian serves as Chairman of Nazarian Enterprises, which maintains diverse interests in aerospace, manufacturing and logistics, technology, hospitality and alternative energy. Nazarian will receive an honorary Doctor of Humane Letters during the David Nazarian College of Business and Economics commencement ceremony at 8 a.m. on Saturday, May 19. Baca, a CSUN alumna who created “The Great Wall of Los Angeles” landmark mural, will receive an honorary Doctor of Fine Arts during the commencement ceremony for the Mike Curb College of Arts, Media, and Communication 6 p.m. on Friday, May 18.

“The conferral of honorary doctorates is the highest distinction we can bestow as a university,” said CSUN President Dianne F. Harrison. “I am so pleased to award this honor to Judy Baca and Younes Nazarian for their lasting contributions to CSUN, Los Angeles and the world.

“One of the greatest treasures of my time at CSUN has been the opportunity to know Younes Nazarian, bearing witness to the impact one family can have on a campus,” Harrison said. “Immigrating to the United States in the wake of the Iranian Revolution, Younes and his family have overcome tremendous obstacles to realize incredible success as entrepreneurs and philanthropists. The Nazarians’ generosity is unlike any CSUN has ever experienced. Beyond the enormous benefit of their financial support, the Nazarians’ investment provides a powerful statement in support of CSUN’s important role in Los Angeles.

"Judy Baca created one of the largest and most famous murals in the world, a monument to diversity and interracial understanding,” Harrison continued. “To create this historic and iconic mural, she blended the talents of local artists, oral historians, ethnologists and scholars with more than 400 at-risk youth. The work was immediately recognized as a multicultural masterpiece. As a renowned artist, educator and community leader, Judy embodies CSUN’s aspirations for its diverse student body, nearly 40,000 strong, the majority of whom come from underrepresented communities and, many of whom are first-generation college students.”

CSUN’s performing arts center, the Younes and Soraya Nazarian Center for the Performing Arts, was named for businessman, investor and philanthropist Nazarian and his wife, an internationally recognized sculptor, after the pair made a transformative gift to support the center.

The Nazarians moved to the United States in 1979 with their four children, fleeing the religiously targeted violence and demonstrations that led up to the Iranian Revolution.

Drawing on the entrepreneurial acumen he had in Iran — where he helped establish one of the largest import/export companies of construction machinery and equipment in the region— Younes Nazarian, soon after his arrival in the U.S., became co-owner of Stadco, a precision products manufacturer of specialty parts in the aerospace industry. He was an early investor and served on the board of directors of San Diego-based Qualcomm, a leader in wireless telecommunications research and development.

In 2000, Nazarian and his wife founded the Y&S Nazarian Family Foundation, whose charitable giving focuses on supporting educational causes through a multipronged approach in academia, public policy and the arts. 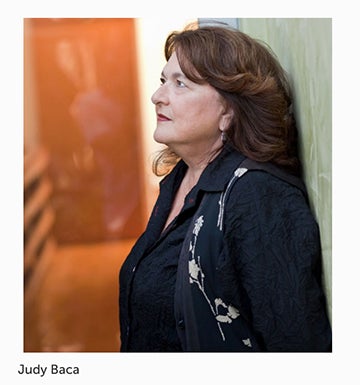 Baca, who graduated from what was then San Fernando Valley State College in 1969 with a bachelor’s degree in art and a master’s in art from what is now CSUN in 1980, is a world-renowned muralist who took her passion for color, Los Angeles and its youth, and turned her paints into a movement.

She is the artistic director of the Social and Public Art Resource Center (SPARC) Cesar Chavez Digital Mural Lab at UCLA. One of her best-known works is “The Great Wall of Los Angeles,” which lines a flood-control channel in the East San Fernando Valley. Baca supervised the creation of the mural, the world’s longest at 2,274 feet, by more than 400 at-risk youth and their families. Two years ago, the California Endowment awarded SPARC a grant to preserve and restore the mural, originally painted in 1976.

In her early 20s, Baca founded the Citywide Mural Program. As she painted her first murals in the barrios of Los Angeles in the 1970s, Baca became known as “the mural lady.” She soon won worldwide attention and acclaim for painting the city’s freeways for the 1984 Summer Olympics. Her work “Las Tres Marias” is included in the Smithsonian Institution’s permanent collection.

In 2010, she completed the Cesar Chavez Memorial at San Jose State University and the Robert F. Kennedy monument at what is now Robert F. Kennedy Community Schools — formerly the Ambassador Hotel, the site of Kennedy’s assassination in 1968.

In 2015, Baca was recognized for her contributions to society with one of CSUN’s Distinguished Alumni Awards. Last year, she was named the 2017 recipient of the American Association of State Colleges and Universities’ Distinguished Alumnus Award for achieving acclaim in her field and for making a significant contribution to the public, intellectual or cultural life of the nation.