How I Spent My Summer Vacation: Four Professors Confront Challenges to Remote Instruction 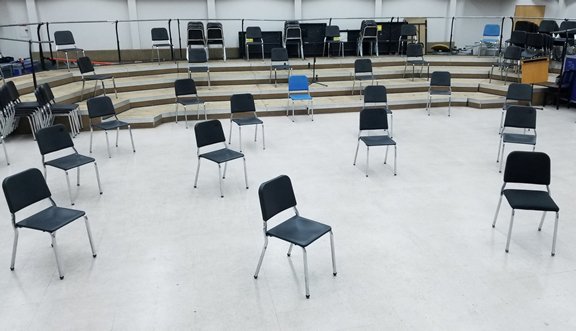 As the L.A. metro area and nation struggle to contain a viral pandemic, all but a handful of Fall 2020 courses at California State University, Northridge (CSUN) are beginning online. The few classes that have been granted permission for partial in-person instruction, determined by intensive summer negotiations with California State University system leadership, are attended by exacting space audits, stringent distancing and hygiene protocols, and, of course, the caveat that the only thing certain is uncertainty.

When campus was abruptly closed in the middle of the Spring 2020 semester, professors were given only a few days’ notice to convert all classes to remote instruction—a daunting task, particularly for courses contingent on live performance or studio-based work to satisfy learning objectives. That trial by fire revealed the staggering array of pedagogical methods in use at a large comprehensive university like CSUN.

To gauge how instructors are preparing for fall, we checked in with four arts and media professors over the past months. With the benefit of time and space for planning—largely sacrificing their summer breaks in the bargain—these professors are migrating diverse modes of instruction online in ways that promise to satisfy learning outcomes, ensure equitable access, and keep students engaged with their academic, artistic, and career goals. So, how do you teach film photography without darkroom access, or produce a TV news show with social-distanced personnel, or assemble a stage play remotely, or hone conducting skills without a live orchestra? 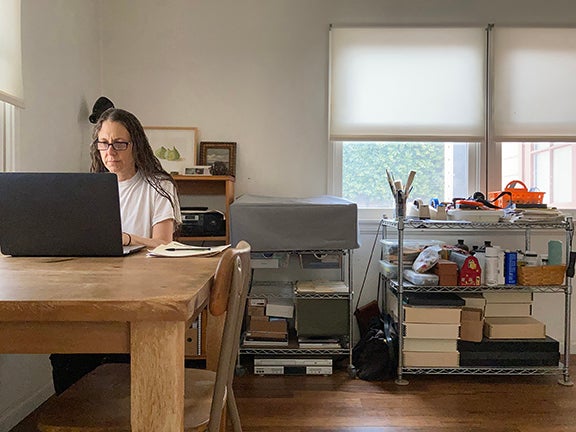 Krane is scheduled to teach two film-based photography courses this fall that have historically been dependent on darkroom processes—both fully online. Students will need to send film rolls out to a commercial lab for developing and scanning, but Krane believes strongly that interesting images aren’t made in labs, they’re made by engaged artists. She has always emphasized in-camera results and holds that darkroom skills can’t compensate for a poorly executed photograph.

Krane identifies certain losses in shifting to fully online instruction. “Darkroom processes slow students down,” she says. A steep learning curve and humbling error rates encourage students to pause before they hit the shutter, to engage more deeply with their composition, and to value the time and effort invested in the final product. “What makes a successful photograph?” Krane asks rhetorically. It’s ultimately about fundamentals, she offers, but technical hurdles tend to make students more careful photographers. Krane views analogue photography as a democratizing platform, with success more dependent on thoughtful composition and hand-eye skills than technology. She limits use of post-processing tools to ensure that students have equitable access. She’s also negotiated student-friendly flat rates with a local lab. Costs won’t exceed funds otherwise spent on paper and film—commodities routinely sacrificed to darkroom trial and error.

Another complication of remote teaching: Krane relies on her habitual attunement to body language—subtle energy shifts, nuances of expression—to gauge her students’ understanding of new concepts and constructive feedback. “How do you get students to show up and be engaged?” she asks. She requires additional individual consultations in the remote environment, and students are expected to arrive to those Zoom meetings with a plan of action that demonstrates personal investment. Krane recognizes that remote learning demands extra measures of maturity and motivation on the student’s part. She gives them the tools they need to succeed, and students must ultimately accept the support offered to thrive in the remote environment. 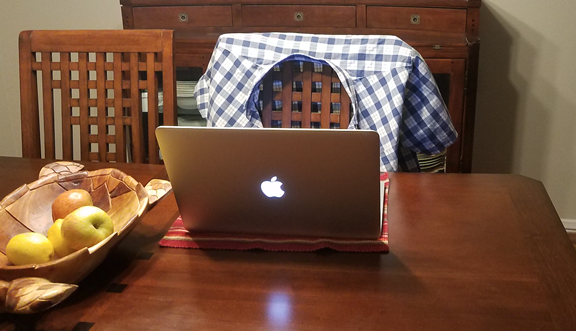 This is a common theme as professors plan their fall courses: ensuring that students do more than just show up to be counted. Remote instruction poses challenges to the professionalism that journalism professor Benjamin Davis instills in his student newsrooms—and not just because of the “Zoom shirt” aesthetic. Davis is a self-professed tie guy and never failed to show up to live classes in anything less. These days he admits to keeping a nicely ironed shirt on his chairback, ready to shrug on when it’s time to ditch the loungewear look. He remains undecided about ties. Only fall will tell. Beyond such psychic sartorial struggles, he’s learned that maintaining intellectual engagement for a three-hour class period is nearly impossible virtually. Davis has introduced asynchronous modules to break up the time but insists on students’ undivided attention during shorter real-time meetings.

Davis thrives on the collective inspiration of a busy newsroom, and while his Advanced Television News course has obtained permissions for limited on-campus activity, audits of the TV broadcast studio and newsroom spaces sharply curtail the number of bodies that can be present at any time. CSUN’s Valley View News, the flagship program of this course, will be produced with half as many broadcast anchors and skeleton camera and control room crews. Meanwhile, Davis must interact with his writers remotely to promote a socially distanced newsroom. “One-on-one interaction is what I’ll miss the most,” says Davis, who delights in the live exchange of “over the shoulder” edits. He conducts edits via shared screen these days to preserve the spontaneous nature of collaborative learning.

Remote instruction may benefit journalism career preparation in unexpected ways. In the call to minimize shared equipment, loaner cameras are strictly limited, so students will be relying on smartphone cameras to document news stories. Davis notes that some hyper-local news agencies have already embraced smartphones in reporting to allow for more candid captures, so it pays to practice using them as professional tools. Davis has also long encouraged students to construct stories as infinitely reconfigurable packages, readily adaptable to digital, print, and broadcast environments—concepts outlined in his book The Digital Media Pyramid. Pandemic distancing measures have underlined just how nimble journalists must be in responding to changing conditions and requirements. 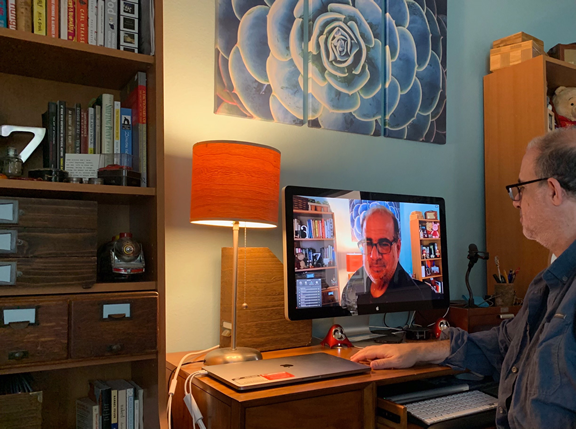 Adapting to present conditions is key as well for theatre professor Larry Biederman’s students, who will be tackling an entirely remote production of Anton Chekhov’s Uncle Vanya this fall. As we begin to talk about the challenges ahead, Biederman brings up a recent New York Times piece, “Digital Theater Isn’t Theater. It’s a Way to Mourn Its Absence,” by critic Laura Collins-Hughes. In it she argues that “sense memories” of a collective audience experience are essential to the theatre aesthetic. “But what is theater?” Biederman asks philosophically. It’s a question he poses to all of his incoming students. “When liveness is relied upon as the lynchpin of theatre, it becomes stale,” he says. “It must be more than that.”

The present circumstances are fertile ground for defining an essence of theatre beyond liveness, and Biederman accepts the mission wholeheartedly. He’s been conducting audits with students to identify spaces suitable to shoot their parts from home. Individual circumstances vary wildly, from living environments to available capture technologies to the relative patience of family members for this whole theatre thing. Biederman says that variations in setting can be turned to advantage in producing a play like Uncle Vanya, noting that character development through environmental cues is a very Chekhovian concept.

Biederman anticipates that the biggest challenges to their virtual production might be technical. As editors dig into sequencing cohesive scenes, they’ll need to balance color and temperature in individual clips taped at different times of day and in spaces with disparate lighting sources. Some variation is to be expected, but technical aspects mustn’t distract from the narrative experience.

As for how remote adaptations affect students developing theatre performance skills, Biederman leavens losses with gains. On one hand, he regrets that students will lose the elusive gift of nailing a scene live. When they know they can do a retake the bar organically feels a bit lower. Then again, he delights that students will have a reference tape to see where they did and did not incorporate constructive feedback. Biederman feels that review capacity accelerates student learning, and it allows instructors the luxury of deeper feedback than live performance generally allows. 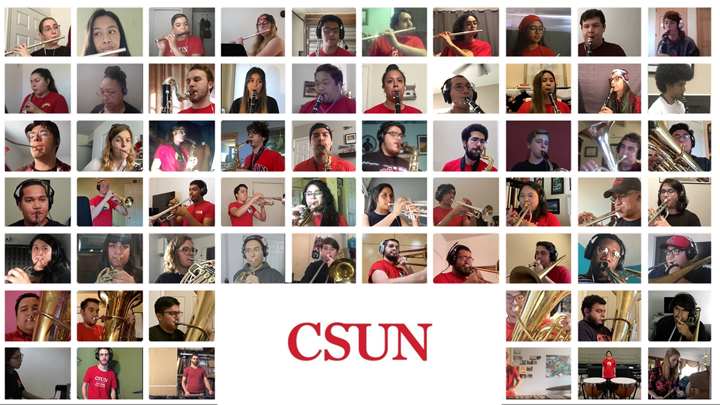 Anyone who watches the CSUN Wind Symphony’s video recording of Adam Schoenberg’s “Beginnings,” remotely assembled in Spring 2020, will agree that a well-executed virtual performance is anything but stale. Music professor Larry Stoffel, the university’s director of bands, oversaw the video’s production, syncing individually recorded clips from 66 students. The result will inspire even casual viewers to rethink what is possible in “lockdown.” Stoffel humbly insists that he and his team took on the project from a state of “blissful ignorance,” not realizing the challenges of audio engineering all those sequences to sound cohesive. He compared the postproduction process to the carnival game whack-a-mole, wherein players strike at randomly appearing targets with a toy mallet. So, will he dare do it again? Absolutely! Fall 2020 video performances will be even more ambitious, and students will take on every element of production. Students fluent in Minecraft skills are already at work crafting a virtual south campus setting, depicting the Department of Music’s Cypress Hall, its Nordhoff Hall–adjacent courtyard, and surrounding landmarks like the Younes and Soraya Nazarian Center for the Performing Arts and Jan Peter Stern’s Steel Sculpture Group.

With social distance protocols in place, live practice with large ensembles is out of the question. Stoffel is instead embracing the idea of “broken consorts,” a term used by music scholars to describe Renaissance ensembles comprising instruments from different families. Roaming musicians of the era formed impromptu groups and played pieces adaptable to instruments on hand. Our historical moment lends itself to such improvisational spirit, and Stoffel notes that the concept presents instructive opportunities for conducting students. By placing students in broken consorts, Stoffel challenges them to overcome perceived limitations and reveal new layers in familiar works.

Stoffel is clear-eyed about what’s gained and lost in migrating his Instrumental Conducting and Arranging course to fully remote instruction. He sees significant benefit in virtual orchestration. Orchestrating a piece of music brings students into greater understanding with the piece and gives them more space to interpret, Stoffel says, and the additional attention needed to orchestrate for remote musicians makes students concentrate on the whole as an intricate sum of parts. The musicians, in turn, develop deeper, more honest awareness of how they’re playing their own parts. Virtual orchestration is one innovation of remote instruction he intends to incorporate permanently. As for conducting, “It’s a form of communication reliant on physicality and a mutually understood language of gestures,” he says. His advanced students are transitioning from a directed role to an interpretive one, and this is when they develop their own posture and physical expression. Without question, real-time nuanced corrections speed that learning curve.

“There are always going to be problems,” Stoffel says, “and we got a zinger this time.” He praises the collective professionalism of music educators who share information and strategies in challenging times and says that spirit will carry them through this crisis, too. He echoes his colleagues interviewed here when he speaks of the compromise, adjustments, and facility of response needed to help student thrive. In the long run, he says, “This moment is rich and ripe with opportunity to make [instruction] even better for students.”

Walking near his house this summer, Stoffel happened upon four CSUN flautists rehearsing together in a public park. Spaced 10 feet apart, they played an impromptu concert while a socially distanced audience gathered. It was their first time playing with each other, or anyone, in three months. All their pandemic-era solo rehearsals and virtual performances had driven home the essence of being an ensemble musician, so they determined a way to get together safely. Their joy was apparent in their play. He looks forward to the day when professors and students can return to campus with a greater awareness of how fortunate they are to get together every day and make music. “We don’t yet know what the outcome [of our innovations] will be,” Stoffel says, “and yet it’s going to be wonderful.”