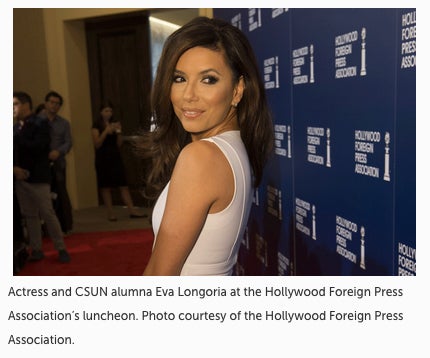 The presentation to CSUN’s Department of Cinema and Television Arts was made during the association’s star-studded annual luncheon last month. The grant comes on the heels of a recent decision by the association’s leadership to create a $25,000 endowed scholarship at the university to support students in the department’s film option.

“We have a wonderful, long-term relationship with the Hollywood Foreign Press Association,” said cinema and television arts professor Nate Thomas, who heads CSUN’s film option. “They understand who our students are—that they are working class and reflect the rich diversity that makes up not just Southern California, but the United States as well. Every financial gift we get makes a difference to our students as they move closer to realizing their dreams—telling stories, making movies, that reflect who they are and the worlds they come from. The association’s leadership has always appreciated that.”

The Hollywood Foreign Press Association, which is made up of international journalists who report on the entertainment industry and hosts the Golden Globes each year, donated a record $1.6 million in grants to a variety of entertainment-related and charitable organizations at its Annual Installation of Officers and Grants Luncheon. The donations were for a wide range of projects, including the preservation of films, higher education, training and mentoring and the promotion of cultural exchange through film.

“We try every year to give as much as we can to these highly deserving organizations,” said the association’s president, Theo Kingma. “It is gratifying to know that our efforts are appreciated and we are helping to further the cause of education and film preservation.”

Cal State Northridge’s relationship with the Hollywood Foreign Press Association goes back nearly 20 years. In addition to its continued support of the film students’ senior film projects, CSUN students also edit in the Hollywood Foreign Press Association Senior Film Edit Suite and work on sound design in a state-of-the-art sound mix facility made possible by a grant from the association.