Nate Thomas, head of the Film Production program in CSUN’s Department of Cinema and Television Arts (CTVA), received an unexpected call on April 1 from the Hollywood Foreign Press Association (HFPA). The organization’s leadership expressed concern for CTVA students in light of pandemic-related disruptions and wanted to know how they could help. Professor Thomas quickly queried faculty throughout the department to gauge student need and reported back to HFPA. Within the week the organization secured $10,000 in funding to help students continue their degree pursuits with fewer financial worries. 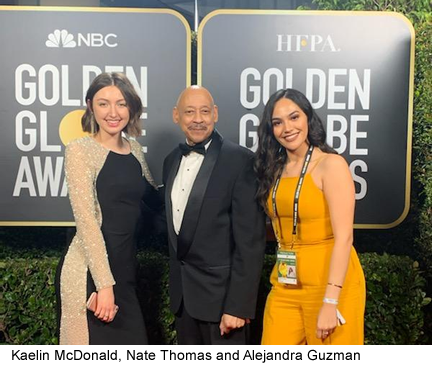 Founded in a previous era of international crisis as World War II raged in the 1940s, HFPA is best known for its annual Golden Globe Awards. But behind the buzz and glamour of the awards telecast lies a nonprofit with a rich history of philanthropy focused on developing future generations of media makers. Their partnership with CSUN began in 1996, when CTVA received its first HFPA grant for student aid.

As an organization focused on amplifying the voice of international creatives in Hollywood, HFPA was particularly drawn to the diversity of CSUN’s student body, whose ethnic, racial, and socioeconomic representation enhances learning environments and informs student-produced content. In fall 2019, 47% of CTVA students were from historically underserved ethnic and racial backgrounds. Among that same cohort 42% attended college with assistance from federal Pell grants, reserved for families with total household annual incomes below $50,000.

This critical financial support is reinforced by a more personal partnership. HFPA leaders annually attend CSUN’s Senior Film Showcase, a gala screening held at the Samuel Goldwyn Theater of the Academy of Motion Picture Arts and Sciences headquarters in Beverly Hills. In turn, HFPA invites CTVA students to intern as ushers, assistants, and social media correspondents at its yearly Golden Globe Awards ceremony. In each instance students benefit from unparalleled networking opportunities and exposure within their target industry.

With this long and deep history of giving by HFPA, it is perhaps not surprising that the organization’s leadership expressed concern for CSUN students as shelter-in-place orders hit Los Angeles. Beyond disruptions in learning environments, 80% of CSUN students work at least part-time and many are experiencing job loss and financial stress with the closure of non-essential businesses. HFPA wanted to help ensure that students wouldn’t see their education derailed by unmet financial need.

HFPA’s generous donation will bolster assistance available to students through the MataCare Grant, a collaborative initiative of CSUN’s Associated Students, the Alumni Association, and the Financial Aid and Scholarship Department designed to rapidly deliver funds to students confronted with emergency expenses. Like the CSUN Food Pantry, which continues to distribute staples to food-insecure students despite pandemic-related challenges, the MataCare Grant is an essential campus safety-net service helping CSUN students minimize the roadblocks and stressors that might interfere with degree pursuit and completion.

“There is a lot of talk in the entertainment industry about diversity,” film professor Nate Thomas said at the 2017 event to celebrate the naming of the HFPA Wing at Manzanita Hall. “For HFPA, it’s not just talk. The association and its members appreciate and respect the rich diversity of people that make up CSUN’s student body and the students in our film program. It recognizes that our film students are the next generation of filmmakers, who will be telling the stories from a variety of perspectives to audiences around the world. The Association’s support ensures that diversity of visions is out there.”