A CALL FOR SUPPORT

Gary Pratt attended CSUN for four years before completing his Bachelor of Music and Master’s degree at California Institute of the Arts. As part of the Music faculty at CSUN, he directed Jazz Ensembles, Concert Bands, the Marching Band, and served as Orchestra Director. In his more recent tenure, he was co-director of CSUN’s renowned Jazz Studies Program before retiring after 36 years of teaching. Pratt chose to celebrate his retirement by creating a jazz scholarship in his name in the Department of Music.  Gary contributed to the fund to get it started, and then reached out to his network to ask for additional gifts to help build the endowment.  The amazing response by former student Grant Nissen, friend Bob Stiefel, former classmate Kevin Bartlett, and others, was a testament to the power of community and the longevity of relationships in Gary’s life.

Of course, Gary’s friend Bob Stiefel contributed, more than once, to the fund.  In fact, it was Bob who suggested the scholarship in Gary’s name in the first place.  Stiefel graduated from San Fernando Valley State College (Now CSUN) in 1967 with a degree in Business Administration with a specialty in accounting and became a CPA.  Bob has been an ardent supporter of CSUN and is a member of the President’s Associates, Heritage Society, and Arts Council for CSUN.  Stiefel shared, “Gary touched many lives during his years of teaching music at CSUN, especially the jazz program. His many students, both from the music industry and other pursuits attended his retirement concert filling The Soraya in tribute. He is humble, modest and his legacy through this scholarship endowment will further his love of music to future generations of students.  I am proud to call him a friend and support him in these efforts.”

Pratt’s long-time friend Kevin Bartlett played with Gary in the Jazz A band while they were both students at CSUN.  Though Bartlett’s education and career were in accounting, his philanthropic support to the university thus far has been to Music.  He, like Stiefel, gave generously to the Gary Pratt Jazz Scholarship campaign, as did a number of Gary’s friends.

The Music Department helped celebrate Professor Pratt’s retirement with a concert in which most of the major music ensembles gladly participated.  Fifty per cent of ticket revenue went to the Gary Pratt Jazz Scholarship fund.  Fellow faculty personally contributed to support Gary’s campaign, including Director of Bands Larry Stoffel, and two of Pratt’s former teachers.  Professor Emeritus Joel Leach was one of his jazz instructors while Pratt was a student at CSUN. Leach would go on to create CSUN’s Music Industry Studies program for those students who wish to pursue the business and management side of the music industry.  Professor Emeritus David Whitwell, who was Director of Bands when Pratt was a student also made a gift. Whitwell and Leach were responsible for Gary joining the music faculty while completing his Master’s studies at CalArts. 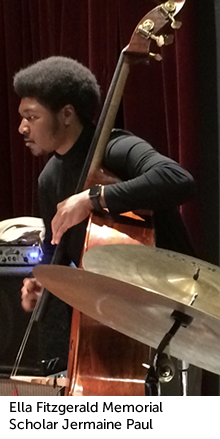 The Jazz Bakery, a non-profit performance space for jazz, made a gift in honor of Gary.  Pratt’s long-standing relationship with Jazz Bakery founder, president, and artistic director Ruth Price allowed CSUN Jazz students to attend performances at no charge and perform at the legendary venue. The Ella Fitzgerald Charitable Foundation supports a jazz student as the Ella Fitzgerald Memorial Scholar in Jazz, providing them with a continuing scholarship that covers tuition and fees, and they have a long-standing collaborative friendship with Pratt.  Gary would give them updates on the Ella Fitzgerald Scholars, first Michael Guttierez (BM ’18), a stand out trumpet player now pursuing his doctorate at University of Miami, and currently the affable and talented bass player Jermaine Paul, whom Pratt is mentoring.  Through this connection, the Foundation participated in this campaign with heart felt enthusiasm.

The Jazz Studies faculty encourage the students to form close knit relationships and support each other, of course as partners in the various musical ensembles, but also in their studies and the struggles that make up the complexities of life.   Dylan Peck was one of Pratt’s star pupils.  Dylan received his BM in Jazz Studies from CSUN in 2014, and then pursued a Masters in Contemporary Composition at Berklee College of Music in Valencia, Spain.  His school used one of Dylan’s original compositions for the commencement ceremony in 2017.  Dylan’s mother, Catherine Peck, answered the call for support of the scholarship fund and was proud to help make this possible for Professor Pratt. Music alumnus Matt Lilley ’97 was among the first to make a gift.  Matt has enjoyed a successful career at Paramount, Lionsgate, and now his own MCL Music Services providing music clearance, supervision, and licensing.

The most significant donor by far has been one of Gary’s very first students at CSUN, Grant Nissen (BM ’84), who wanted to help insure Gary’s legacy of supporting students.  A percussion performance major at CSUN, Grant performed as a snare drummer with the Sacramento Freelancers Drum & Bugle Corps, where meet his wife Martha, also a corps member.  Grant began working at United Parcel Service (UPS) to secure temporary, yet steady work between music gigs. After UPS saw promise in him, he remained with the company and was promoted all the way to several management assignments in Southern California and in the Asia-Pacific region before retiring after 31 years of service.

Martha Nissen ’96 is also a CSUN alumna, with a MA in Education.  She was an elementary school teacher in Lancaster and then in Simi Valley, and just retired after 31 years. Martha and Grant have been residents of nearby Simi Valley since 1996. As a “retirement gig” they now run Can Solivera, which brings outstanding extra virgin olive oil to the U.S from a distant cousin of Martha’s in Catalonia, Spain. (www.solivera.us) 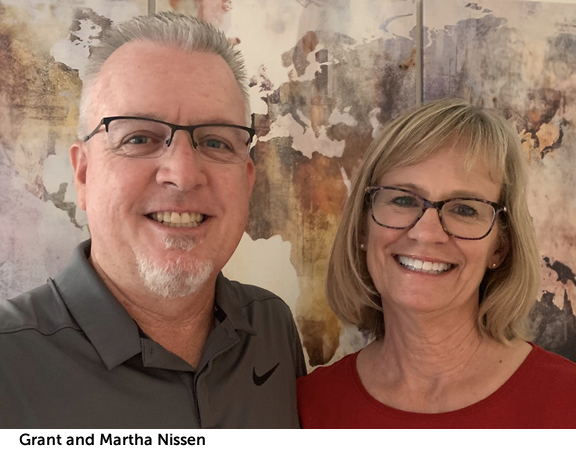 Grant stated, “Gary and I have known each other for over 40 years.  He and I were young musicians together once at CSUN and friends for life.  Martha and I don’t feel compelled to give to this foundation in Gary’s name, we feel honored to give.  In my mind, no one has made a greater positive impact on young musicians at CSUN than Gary.  Continuing his legacy through this scholarship endowment is truly a privilege and an honor.”

When Professor Pratt reached out to his network, his friends, colleagues, partners, and students responded.  Gary touched so many with his teaching, his friendship, his passion, and his collaborative spirit.  One builds a community, a network, through all the interactions in life.  A community that responds to you, and, when called upon for support, comes through.

Gary is extremely grateful for the profoundly generous support of Grant and Martha Nissen and  all those in his community who made gifts to his scholarship campaign.  He has not yet reached his goal, so if you would like to contribute you can GIVE TO THE GARY PRATT SCHOLARSHIP ENDOWMENT.

For further questions on how you can support the Mike Curb College, feel free to reach out to Michael Ryan, Senior Director of Development, at michael.ryan@csun.edu or (818) 677-4196.