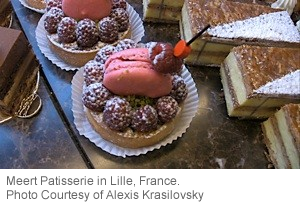 Longtime screenwriting professor Alexis Krasilovsky, an award-winning writer and director, explores the issue of world hunger by using pastries as metaphor in her latest documentary, Let Them Eat Cake.

Krasilovsky and her co-producer, Sanjoy Ghosh, worked with teams of filmmakers in 12 countries to bring awareness to the unsavory aspects of producing sweets.

“Through the ingredients of those pastries [we filmed], we were able to show the other side of the equation,” said Krasilovsky, who has taught screenwriting at California State University, Northridge for almost 30 years.

Like its production, the documentary has traveled the globe — through a host of film festivals. The closest to home takes place Oct. 16, when the LA Femme International Film Festival, a local festival showcasing the talents of female filmmakers from around the world, will feature Let Them Eat Cake at a screening in Beverly Hills.

Krasilovsky has produced a number of award-winning documentaries, raising awareness about gender inequalities and social injustice. In the production of Let Them Eat Cake, released in 2014, Krasilovsky tapped many CSUN students during the six-year project.

Working closely with CSUN students and some faculty members, Krasilovsky’s team members  filmed in countries such as Peru and Guinea. 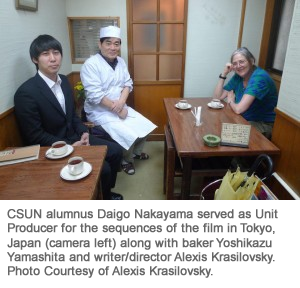 According to Variety, CSUN’s Department of Cinema and Television Arts is ranked among the top 25 film programs in the world. Krasilovsky said the CSUN film students with whom she worked demonstrated a high level of professionalism.

“I had dozens of students from all over CSUN working as translators, cinematographers and camera assistants,” she said.

“The suicide rate of farmers is astronomical,” Krasilovsky said. “There is so much hardship that goes into producing sugar for pastries around the world.”

Illustrating the struggles of developing communities was grueling and philosophically challenging. Spending money on the film instead of using it to feed starving children was a huge moral dilemma, she explained.

“[I thought to myself], ‘Is the film going to reach out to enough people to produce enough significant change to justify its existence?’” she said.

Yet, Krasilovsky said, she has been gratified by responses from audiences around the world, who have called the documentary eye-opening and illuminating.

For tickets and information on the LA Femme International Film Festival, visit lafemme.org.  “Let Them Eat Cake” can also be viewed on VOD/DVD through http://pastriology.com.