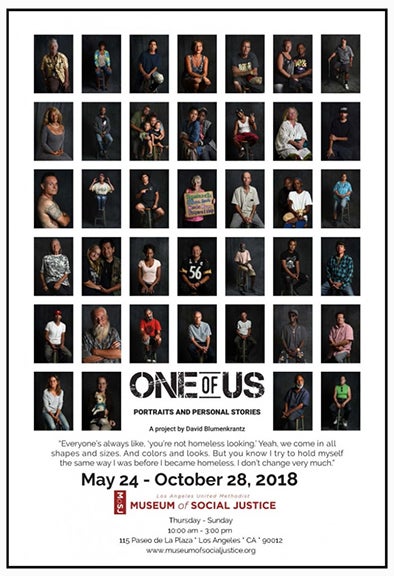 The Los Angeles metropolitan area harbors the largest homeless population in the United States of America. The U.S. Department of Housing and Urban Development reported a nearly 26 percent increase in homeless residents in both the city and county in 2017, increasing the total homeless population to more than 80,000.

California State University, Northridge journalism professor David Blumenkrantz documents the stories of the city’s homeless in a photography exhibit, “One of Us,” on display at the Los Angeles United Methodist Museum of Social Justice from May 24-Oct. 28. An opening reception will take place from 3 to 5 p.m. on Saturday, May 26.

“‘One of Us’ recognizes the dignity and individuality of people economically, socially and psychologically disenfranchised from society,” Blumenkrantz said. “These portraits and personal stories, made with those who wanted their faces to be seen and their voices to be heard, challenge us to recognize the homeless as more than a faceless societal burden.

The exhibit displays conversations with and photographs of more than 40 individuals, representing a comprehensive catalog of the causes and symptoms of homelessness and the many obstacles that make it such a difficult situation to rise above.

“The most consistent message we heard was a longing for understanding and empathy from the general public and law enforcement,” Blumenkrantz said. “Each person’s story touches on this yearning in some way

The project arose out of a longstanding collaboration between Blumenkrantz and the San Fernando Valley Rescue Mission, and a shared desire to change the conversation surrounding homelessness, he said.

“Along with many of the activists, social service providers and others involved in seeking solutions, we share a common interest in ‘humanizing’ the homeless,” he added. “It’s a phrase that on the surface seems redundant and offensive, because it infers that each person encountered in this work was not unquestionably quite human already.”

Earlier this month, CSUN recognized Blumenkrantz for his work on this project at the 2018 faculty awards, honoring him with the Exceptional Creative Accomplishments Award.

“I’m grateful for the award, mainly as a recognition of the homeless crisis as a humanitarian crisis,” he said. “Anyone who has heard me drone on in a classroom about documentary theory and the crucible of respectful representation could probably understand how this kind of notoriety feels awkward to me. I’m fine with being acknowledged as a mirror being held up to the people who have given me their trust and time for this project.”

The Museum of Social Justice is located at 115 Paseo De La Plaza, Los Angeles, CA 90012. For more information on the exhibit, and to RSVP for the opening reception, visit: www.museumofsocialjustice.org.