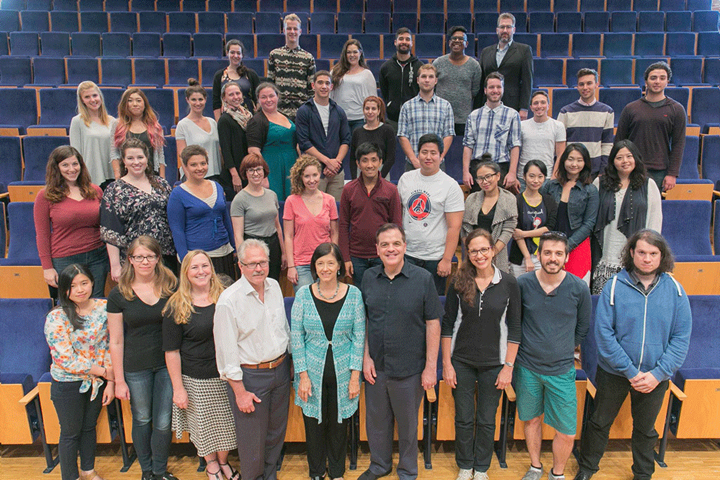 Reposted from CSUN Today.  Written by Cati Mayer on Ocober 8, 2015. 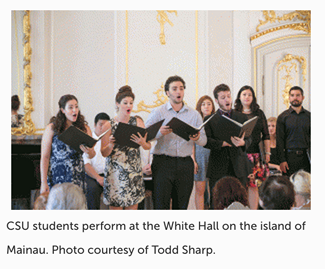 When they entered the White Hall of the famous castle of Mainau, Germany, the group of California State University students had no idea how their audience would react. The choral performance — the first ever in the historic venue — was hosted by the Swedish royal family, which owns the castle and is known for being extremely selective with events.

But the 28 young musicians had no need to worry. Their performance was followed by curtain calls and enthusiastic applause from the audience, including members of the royal family — who invited them to return for another concert in the future.

The performance on the island of Mainau, known as the “flower island,” was just one of many highlights of the CSU’s Summer Arts Romantic Lied in Trossingen excursion. The romantic lied is a type of German song, usually German poetry set to classical music.

The summer arts program is an annual partnership between all California State Universities, embracing visual arts, dance, theater and music of all kinds. For this year’s trip, CSUN’s Department of Music sent 18 students to Germany, encouraging them to explore the German language and culture. The program took place from July 31 to Aug. 17.

“It is amazing that there are these opportunities,” said Deanna Murray, professor of voice and head of vocal arts at CSUN. 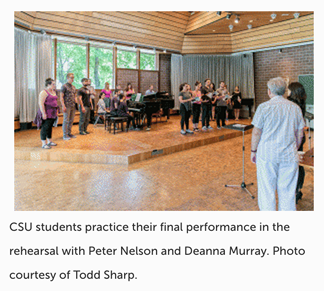 In addition to the CSUN delegation, other participating students hailed from Cal State Fullerton, San Francisco State and community colleges such as Pasadena City College. Murray, Anthony Radford of Fresno State and Mark Goodrich of Cal State Fullerton coordinated the program, which took about a year and a half to plan.

“[We took] a previous trip to look at the venue, meet some of our colleagues and collaborated with Peter Nelson, who coached many famous opera artists like Renée Fleming,” said Murray, one of the vocal coaches for the summer program.

Nelson is a pianist and served as head coach of the program, overseeing the facilities and the pianists.

When she visited Nelson earlier, Murray said, he took her to the island of Mainau and pitched his idea: The castle’s premiere concert.

“He really worked [his] magic there to get us a concert,” Murray said. “It was a wonderful day, a real highlight.”

“They [got to] know four pianists who are major accompanists in the German world,” Murray said.

The selection of Trossingen, a small town in southwest Germany, was purposeful, she added.

“Everything we needed was there. The facilities were excellent, the artistic staff was excellent,” Murray said. “There is virtually nothing to do but practice and work on your art.”

Manfred Anaya, a 19-year-old vocal performance major at CSUN, said the students spent a lot of time in the practice rooms, taking voice lessons or practicing acting, interpretation and musicality.

“But because everything was so slow-paced [in the town], it felt like we had a lot of free time,” Anaya said. 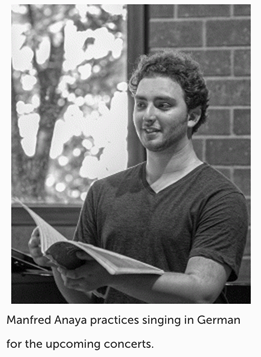 The sophomore learned from Murray, his vocal professor, about the program and immediately expressed interest, he said.

“I wanted to get a better understanding [of] German,” he said. “Being able to go to Germany really helped me connect the music with the place.”

“Germany was absolutely amazing,” Winterhalter said. “It seemed that every town or city was so full of life and history. I was pretty excited about being able to study songs in the country from which they were born.”

Anaya, who was visiting Europe for the first time, said he especially enjoyed the German lifestyle and laid-back atmosphere.

“It was very peaceful and quiet, in comparison to living in California,” Anaya said, noting that he would love to return to Germany to pursue a graduate degree. “I got better at German. I was the translator for most of my friends.”

Beyond improving their language skills and cultural understanding, the students also earned up to four college credits toward their majors.

In addition to the castle concert, the students performed in three public performances at the Musikhochschule in Trossingen. Murray said she was astonished by the positive feedback the group received.

“When we did the performance at the castle in Mainau, I was sitting by a lady who was smiling all the time and applauding so much,” Murray said. “She was just thrilled.”

The German audience members appreciated the American students’ performances in German and show of respect for the German culture, Murray said.

“Of course the German is not perfect, but it’s pretty good. It’s close enough that [Germans] can say ‘Yeah, that’s Schubert, I recognize that,’” she said. 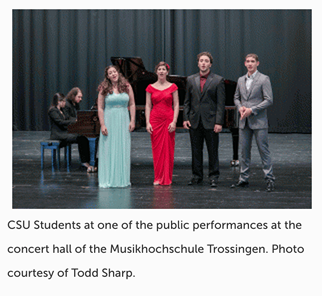 Gaining experience outside their comfort zones may have been the most important lesson for these aspiring professional musicians, Murray said.

“When you do an international program, you learn a lot about yourself, more than anything else. There are some lessons that can only be learned this way.”

Winterhalter said the biggest challenges he faced abroad were the language and the fear of not being able to communicate.

“My German is incredibly limited,” he said. “But the challenge was probably the most important part. When you’re a kid and someone throws you in the deep end, you learn to swim pretty fast.”