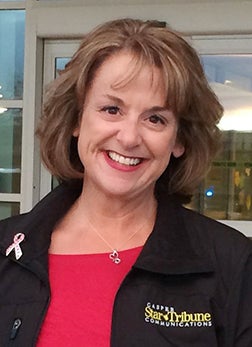 It was 2015 and columnist Mary Billiter was on assignment to write about breast cancer survivors for her newspaper, the Casper Star-Tribune in Wyoming. She interviewed survivor and obstetrics and gynecology specialist Dr. Patricia Bell.

Then the doctor turned the tables and asked, “‘Have you had a mammogram recently?'” Billiter ’90 (Journalism) recounted this summer. She answered, “‘Yes, but not recently.'” So Billiter scheduled a mammogram right after the interview — and received a terrible shock.

“When I failed the first mammogram, I knew because the tech asked, ‘If there’s something wrong, what’s the best way to reach you?’ I knew I had failed the test.'”

The California State University, Northridge alumna was soon diagnosed with breast cancer — while she was undergoing a five-year medication plan for cancer prevention treatment. Billiter said writing was a way to escape. A lifelong author and reporter, she applied herself to cranking out two new fiction novels, Do Not Disturb and The Escape Clause. Through those trying times, Billiter said, she saw a light at the end of the tunnel because she knew she had stories to tell.

Billiter endured several surgeries and medical procedures to rid her body of the cancer. She had an abdominal hysterectomy, which required eight weeks of recovery. Her husband, Ron Gullberg,suggested a getaway to Newport, Ore., to get her mind off things. There, she climbed up 114 stairs to see the top of the Yaquina Head Lighthouse, Oregon’s tallest — which later inspired The Escape Clause. The book is a romance novel about competing hotel owners who are star-crossed lovers discovering secrets between their two families. The Escape Clause served as a welcome distraction from her illness, Billiter said.

“That book was my saving grace,” Billiter said. “I said to my husband and son before we began the lighthouse tour, ‘We are going to walk up all these stairs,’ and I got a button that said, ‘I made it to the top!’ I stood up at the top of that lighthouse, and I thought, ‘this is where romance begins and ends.'”

After that trip, she returned to her doctor at home in Wyoming, hoping for an all-clear diagnosis — but instead, she learned that her breast cancer had persisted. She endured one more procedure, which consisted of two, stereotactic core-needle biopsies. During that three-hour, painful probing session, all Billiter could think about was Newport. She remembered the beautiful lighthouse and dreamed about the characters in her novel, Kelsey and Oliver.

During her treatments, Billiter decided to blog about her journey and linked her blog to her Casper Star-Tribune column.

Columnists choose their own topics, but once she got breast cancer, she lost control of the content, Billiter said. She explained that she had no idea what the results would be after her lumpectomy. No matter what the outcome, she was determined to tell her story, she said.

“It was the most vulnerable I’ve ever been as a journalist,” said Billiter. “It was the hardest work I had ever done.”

Billiter battled suicidal thoughts and had to seek professional help. She was in such a dark place and could not imagine leaving her four children at the time — twin boys Kyle and Austin, now 20; Ciara, now 16; and Cooper, now 9 — but the breast cancer took her down a very dark emotional path, she said. She shared her sensitive story with her readers.

“I [didn’t] want to share this, I didn’t want my readers to know that a mom of four thought about ending her life because things looked so dark,” Billiter said. “And I was not healing as fast as I wanted, and I kept getting bad and negative results. I didn’t want people to know that I was mentally losing the battle. When I [finally] shared that, I thought it was the most authentic I’ve ever been on the page — and that was rewarded in the recognition that I got.”

Thanks to her candor, in 2017 she won second place in the Best of the West journalism contest for Special Topic Column Writing. Billiter said the award validated her as a journalist.

“As a columnist, it’s a totally different thing I hopped into. I wanted to be a hardcore journalist like my father, who worked for the Los Angeles Times,” Billiter said.

However, her own physical and mental health experiences exceeded “hardcore.”

Billiter moved to Southern California from her home state of Kentucky when she was 10. She still holds close the journalism ethics and values she learned at CSUN.

“I did all four years at Northridge. I was from Orange County and wanted to get away,” Billiter said. “I really wanted to see life outside of Orange County, [beyond] ‘the orange curtain,’ and Northridge was perfect. And the journalism department was amazing. I just love Northridge.”

She remembers her favorite classes at CSUN, such as History of African-American Writers and a variety of journalism courses such as Media Law, which fueled her love for writing and passion for literature. CSUN taught her to be deadline-driven, and she finds that her background in journalism is still a useful skill, she said.

“My journalism degree from CSUN gave me that grounding to take that jump [to share my cancer story] because I knew I could do it,” said Billiter. “CSUN taught me work ethics and morals, dependability … CSUN gave me that belief that what I did mattered.”

After Billiter graduated from CSUN in 1990, she became a professional journalist. She later moved to Wyoming and pursued a master’s degree in adult and post-secondary education from the University of Wyoming.

Unfortunately, she also entered an abusive relationship. Several years later, that experience inspired her first work of fiction, Not My Kid…. She stated that the book is closely autobiographical.

“Not My Kid… is about a reporter covering a lead story who discovers her son is a crime suspect, and that [book had] the backdrop of domestic violence because [I experienced domestic violence in my]first marriage,” Billiter said.

More recently, Billiter wanted to share her work with someone who knew her father [who passed away in 1997], so she emailed her former professor, CSUN journalism professor emerita and veteran journalist Cynthia Rawitch, in 2011. Rawitch knew Billiter’s father through her husband, Bob, who had worked with Billiter’s father at the Los Angeles Times.

“[I’m] very proud and happy that she was expanding her writing into books, from reporting and her column,” Rawitch said. “I also learned about her life at that time, and the road she had taken, which I think was very different from what she thought it would be. I felt lucky to have been involved in even the tiniest piece of her life.”

Rawitch said was happy to see Billiter blossom into her own career and remembered that she was an amazing journalism student.

“Mary was enthusiastic, eager to learn [and used the knowledge she gained] as much as she could in her chosen profession,” Rawitch said. “I remember her as being engaged in class and very interested in moving into the student media.”

“They are your cheerleaders,” Billiter said. “It’s great to know that you have supporters.”

She was elated to note that she’s been breast cancer-free for six months. Billiter is still busy writing her weekly column, working on more books and teaching fiction writing courses at Laramie County Community College in her hometown of Cheyenne, Wy. After publishing nine books, she’ll release her 10th book, Rule Breakers, in September, and she’s already working on her 11th title. For more on her novels and columns, visit http://www.marybilliter.com.

Billiter donates to CSUN’s Department of Journalism and said she tries to give back to the school as much as she can.

“I love being a Matador,” Billiter said. “I have my CSUN alumni sweatshirt. I’m proud of where I am because of the education and the foundation I got at CSUN. They’re the best, and my heart will always be there.”