California State University, Northridge alumnus Mark Holtzman ’75 (Music) spends his days with his head in the clouds. He doesn’t have a typical workday, but then, he didn’t take a typical path to get there either. 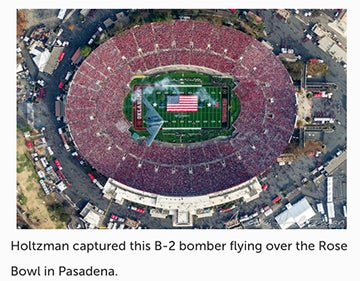 Holtzman is a pilot, award-winning photographer and owner of West Coast Aerial Photography, Inc., who spends every day doing what he loves. His primary business includes capturing aerial photos of construction sites, buildings, sports venues, golf courses and roads. His work has been featured in Vanity Fair, The Wall Street Journal and Sports Illustrated, among others, and he has been a presenter at the Annenberg Space for Photography Iris Night Lecture Series. He spends his free time in the air in his single-engine small plane, capturing views from all over California in photos, such as people enjoying the beach, natural landscapes, cityscapes and even B-2 bombers flying over the Rose Bowl. Holtzman usually takes one other person with him on these trips, allowing the other pilot (usually his son or another young pilot needing flight hours) to fly while he photographs.

Aerial photography wasn’t the career path Holtzman thought he would follow, though. He chose music as his major at what was then known as San Fernando Valley State College because he had played the trumpet since he was 4 years old.

“Being around the other musicians at CSUN really brought my music to a different level,” he recalled. 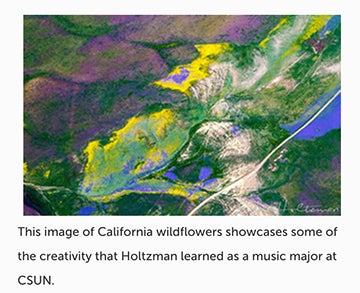 So how did he go from music major to aerial photographer? After graduation, he discovered there were not a lot of careers open for trumpet players, and none that truly excited him. So, just as he had explored different possibilities in his music, he began dabbling in different jobs.

A summer job as a beach lifeguard sparked his interest in paramedic training. After working as a lifeguard paramedic for two and a half years, Holtzman landed a job as a medic at a local movie studio. When his family’s truck sales business needed help, he shifted careers again, but realized he had no upward mobility there.

Holtzman had been interested in photography for most of his life. By the time he was 10, he was developing photos with his dad in a makeshift darkroom in a closet of their Southern California home. While in high school, he developed a passion for flying, obtaining his pilot’s license at age 17. By the time he realized that working at his family’s business wasn’t his dream, Holtzman and his wife brainstormed ways to combine his passions for photography and flying. Although he’d never considered aerial photography, it seemed like a natural fit.

Even though he isn’t playing his trumpet in his current career, Holtzman is applying the creativity and improvisational skills he learned at CSUN.

“Music and photography are both art — just different mediums,” he said. “All art relies on improvisation and adapting to constantly changing conditions.” 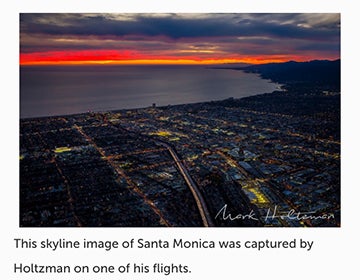 Holtzman made the most of his college experience by following his passions, wherever they might lead over the years, and he suggests current Matadors do the same.

“Your interest may not have been a lifelong passion, but you never know where it might steer you,” he said. “College years are all about exploring possibilities. And it’s OK to change your dreams.”

For more information on Holtzman and his photography, visit https://www.markholtzman.com/.