Pinar Toprak ’03 (M.A., Music Composition), right, who composed the score for “Captain Marvel” and many other high-profile projects, returned to CSUN for a Master Class, including a discussion with Elizabeth Sellers, founder of the media composition option for the Department of Music, left. Photo by David J. Hawkins.

The pounding drums and agitated strings and horns tried to capture the emotions of the unfolding onscreen drama: Men, women and children frantically ran and drove through a forest to escape an erupting volcano, an ominous cloud of ash barreling toward them.

Pinar Toprak ’03 (M.A., Music Composition) had scored the scene herself before the Chinese blockbuster “Skyfire” premiered on the big screen in 2019. Now, Toprak watched the scene over and over in Cypress Recital HalI, listening to new accompanying musical samples written by CSUN students.

At the end of each clip, Toprak offered praise on the compositions — and advice on ways the students could improve, with techniques they’ll be able to employ in future works.

“The main melody is always the film,” Toprak told students from the Commercial and Media Composition and Film Industry Studies programs. “Whatever we do is under the main melody. We’re the subconscious. 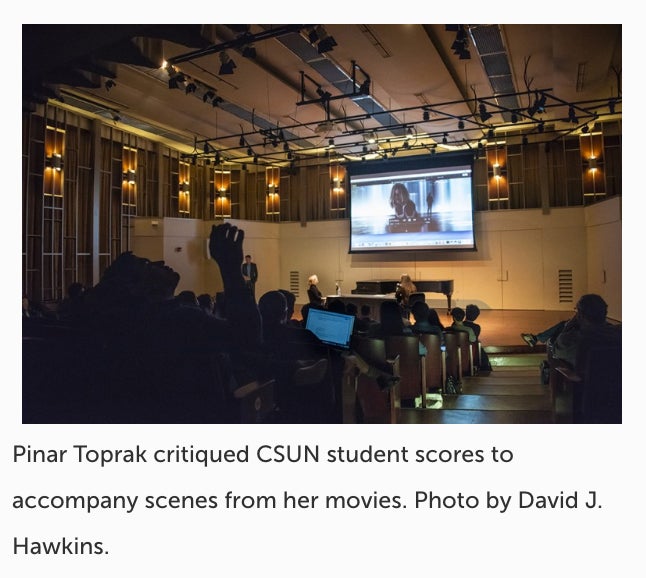 On Feb. 19, Toprak returned to her alma mater to discuss her career, including taking small-budget projects to break into the business and making music for one of most ambitious multi-film experiments in cinema history. She also provided specific feedback on students’ individual samples written for clips from “Captain Marvel” and “Skyfire.” In returning to CSUN to inspire and teach a Master Class, she set an example of success for students in the Mike Curb College of Arts, Media, and Communication and its Department of Music.

“This was a fantastic way to learn,” said Michael Gossard, a junior media composition major. “Hearing her comments was very gratifying. It really meant the world, and I think it’s what sets CSUN’s program apart.”

The evening started with a Q&A between Toprak and Elizabeth Sellers, founder of the media composition option for the Department of Music, who noted she has long admired Toprak’s work.

“Pinar Toprak is part of the next generation of film composers who happen to be women,” Sellers said. “Their expert and provocative scores are an important addition to the pantheon of great film music artists.”

Toprak discussed the technical and the philosophical tools she uses to do her job, including the specific software she works with as well as the guiding principles she follows in using music to elicit an emotional response.

Composers must say what they want to say with as few notes as possible, she said — to emphasize the most important things and then get out of the way. She cautioned students to be careful with the instruments they choose; the sounds of certain instruments evoke specific emotional responses, so budding composers should be sure the instruments they choose match their intentions. She told students to make sure they cut their music before any explosions on screen, because their sounds are never going to “win that fight.”

Toprak has used an impressive range of colors in bringing to life stories large and small. She experimented with nontraditional instruments such as the “electro-organic” aFrame percussion to give “Krypton” an alien vibe. She gave the Pixar short “Purl” a jazzy bounce. And she created the heroic soar of “Captain Marvel,” using a mix of orchestral and electronic instruments, reflecting the duality of a human-alien hybrid protagonist.

The heart of the Captain Marvel character is there in the theme, a melody Toprak wanted to be instantly recognizable as it follows the character through further cinematic adventures (such as the moment when Captain Marvel arrives in “Avengers: Endgame”). The “Captain Marvel” tagline is “Higher. Further. Faster,” so Toprak found her theme’s opening with a minor seventh interval — a two-note combination that reaches for the sky. 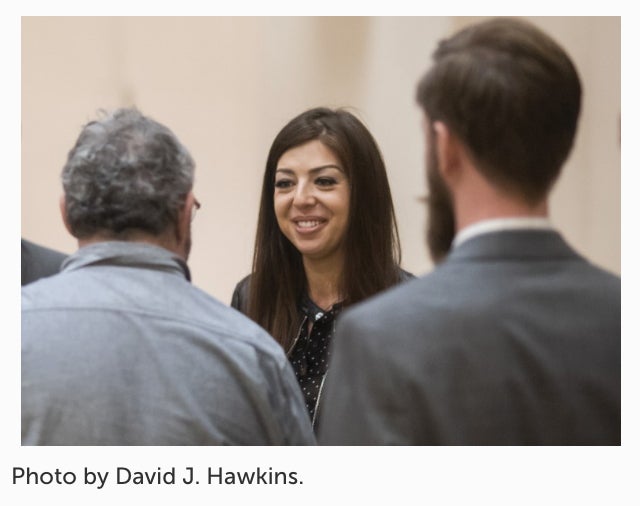 Toprak’s origin story is as aspirational as that note pairing. Growing up in Turkey, she started playing the violin at age 5 at a conservatory in Istanbul. Her father loved American movies, and she quickly became enamored with the great scores she heard — Ennio Morricone’s westerns, John Williams’s “Superman.” She used to record film scores off the TV and onto her Walkman (later, she learned it was possible to just buy movie soundtracks). She knew she wanted to be a film composer, but she said that job didn’t exist in Turkey at the time.

At 16, she graduated early from the conservatory, and her father encouraged her to go to America, learn English and figure out a way to make her dreams come true. Soon, she was studying film scoring at the famed Berklee College of Music in Boston, surviving on scholarships, loans and multiple jobs. Testing out of multiple classes, she graduated from Berklee in two years.

Then, it was time to move to Los Angeles, the obvious place to realize her Hollywood dreams. Her student visa required her to keep studying, and one of her Berklee professors, Richard Davis — who had orchestrated “Robin Hood: Prince of Thieves” and “The Last Boy Scout,” among other credits — told her he’d gotten his undergraduate degree at CSUN.

She decided to further broaden her horizons and pursue a master’s of music in composition, with an interest in diving further into classical composition.

“I needed to be in an environment where I would be provided something different than what I had before,” she said. “I still talk about the teachers I’ve had at CSUN at that time, and the impact that they’ve had on me. I’ve had some of my most wonderful learning experiences at this school.”

She broke into the industry as an intern in Paramount’s music department, later landing a programming position at the studio of famed composer Hans Zimmer (“The Lion King,” “The Dark Knight”). She took on as many projects as she could get, working her way up and making it known to her agents that she had her eyes set on the blockbusters.

Her work on “Justice League” led to a gig scoring the DC “Superman” prequel series “Krypton.” Her face lit up when asked about the moment in the first episode when the soundtrack quotes the opening horns from John Williams’s “Superman” theme.

“It was amazing,” she said. “To be able to work with that theme was incredible.”

During the audience portion of the Q&A, a student asked Toprak if she’d had to prove herself in a male-dominated field. Toprak acknowledged that she often had to go through extra auditions, especially for action scenes, but she said she couldn’t allow herself to think about how there were so few composers like her in the industry.