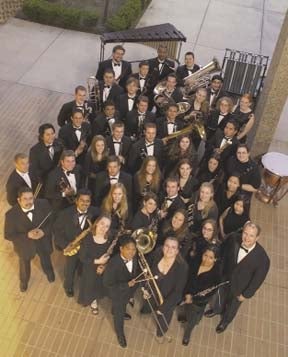 Among the innumerable collegiate wind ensembles found throughout North America, a select few have distinguished themselves from the pack of others. These distinguished few possess an established heritage of musical excellence while keeping a steadfast vision toward a relevant and profound musical future. The Wind Ensemble at CSUN is among these distinguished few. The CSUN Wind Ensemble has long been a hallmark of the excellence associated with the university’s renowned music department. With both an accomplished legacy and dedicated future, students entering the ranks of the CSUN Wind Ensemble and Wind Symphony find themselves immersed in artistry and musical performance.

The band program at CSUN is dedicated to the promotion of concert band music by performing the finest of literature and bringing this music to the peoples of California. Each year the CSUN Wind Ensemble performs throughout southern California, presenting concerts of the finest of band music at diverse venues — public schools, state historic parks, cultural landmarks, resort destinations, and residential communities. Through generous support provided by the CSUN Associated Students, the Wind Ensemble and Wind Symphony embark on unique concert series each year — “Band on the Run” concerts are free outreach performances designed specifically for presentation to the public throughout the greater Los Angeles region; the “Gaudeamus Igitur” concerts are performances designed specifically to bring live music to segments of the CSUN student population (and other Los Angeles college students) who otherwise have limited experiences with band music.

The wind ensembles program at California State University, Northridge is one of the most progressive of its kind in the state. In March 2008, the CSUN Wind Ensemble performed in the Walt Disney Concert Hall on the invitation of the Los Angeles Philharmonic Association (Esa-Pekka Salonen, music director). Over the past decades, the CSUN Wind Ensemble hosted the only National Wind Ensemble Conference ever to be held in the West, have recorded for the US State Department’s Voice of America Radio the production of a thirteen-part TV series for classroom use, and have featured numerous prestigious guest conductors and composers, such as Aaron Copland, Ernest Krenek, Karel Husa, Frederick Fennell, and Frank Ticheli. In addition to performing more than fifty world premieres of new works for bands, the CSUN Wind Ensemble has given first performances of newly discovered bandworks by earlier composers, including Holst and Sibelius.

The CSUN Wind Ensemble has made international concert tours to Europe in 1981 and 1989, performing in major concert halls in six countries, as well as numerous radio recordings for such distinguished stations as Radio Zurich, Radio NOS, BBC, and the Westdeutscher Rundfunk, Koln. In 1984 the Wind Ensemble toured Japan and appeared before the ABA-JBA Convention and on the Tokyo TV Broadcasting System. The ensemble was awarded a Gold Medal at the 1989 International Music Contest in Kerkrade, the Netherlands.

Auditions for the Wind Ensemble & Wind Symphony take place before each semester. Information regarding the audition process can be found here:

A Special Invitation to School Band Students and Directors

A limited number of complimentary tickets to all of our band concerts will be made available to school band directors and their students & families. Please E-mail Dr. Stoffel if you or your students would use such tickets. (Tickets are otherwise priced $10/7/5.)