If singer-songwriter Maia Sharp walks the line backward, it takes her to California State University, Northridge. It’s where she received a significant part of her music education. But what resonated maybe more for her, is it introduced her to a community.

“I can trace every milestone, like the first song I ever had recorded by another artist, my first publishing deal, my first label deal — I can trace all of those back to somebody I met at CSUN,” said Sharp ’92 (Music).

That sense of community came full circle as the CSUN alumna performed as the opening act Feb. 22 at the Valley Performing Arts Center, supporting her friend and Rock and Roll Hall of Famer Bonnie Raitt.

The folk-rock artist said she benefited from CSUN community connections early in her career.

“The very first career thing [that] happened [for me] was that Cher recorded one of my songs, [“Don’t Come Around Tonite”] in 1995,” she said. “I co-wrote the song with my friend Mark Addison, and I met Mark because he was playing in a band with my friend Joseph Zimmerman, who I met on my very first day at CSUN.

“[It was the] first class of my first morning in 1988, and there was Joe,” Sharp continued. “We became really good friends. Joe was already playing around town with other songwriters. I went to see his gig and met his friends, and now I’m in that circle. When I wrote the song with Mark and Mark’s publisher, he had a deal and his publisher got a cut with Cher. All of a sudden, because of that thread, I have a cut.”

“Don’t Come Around Tonite” was originally pitched, through Addison, to music-industry executive Miles Copeland, who managed The Police and The Go-Go’s, to play for The Go-Go’s lead singer Belinda Carlisle. Carlisle didn’t end up recording it, but Copeland signed Sharp to a label and publishing deal. That led to another boost for Sharp’s career.

“[Copeland] owned a castle in France, and he held songwriters’ retreats there,” she said. “He would invite 24 songwriters to come out and write together every day in different groups of three. Because he published me, he’d put me among a killer group of people. So through him, I met unreal songwriters — I wrote with Carole King in one of my first ‘castles,’ and that’s all because of Miles. And I met Miles because of Mark’s publisher. And I met Mark because of Joe, and I met Joe because of CSUN.”

Sharp has since released nine albums, written songs that have been recorded by music luminaries such as Raitt, Art Garfunkel, the Dixie Chicks and Trisha Yearwood, produced albums for other artists and toured from Portland, Maine, to Portland, Oregon — and many points between.

Her Feb. 22 show at VPAC was a homecoming. Admittedly, she had not been back to CSUN since 1992.

“It was beautiful and sounded fantastic on stage,” Sharp said. “Everybody I spoke to in the audience, musician or not, really enjoyed it. I was really, really happy. I also felt a little proud, like, ‘Yeah, I went here.’”

Sharp already had a musical foundation prior to attending CSUN. Her parents were both musicians. Sharp took piano lessons from a friend at an early age, and then she took up the oboe at her father’s suggestion.

“My dad and I were listening to a classical station on the drive to the first day of seventh grade,” she recalled. “He said, ‘Hey, not a lot of people play the oboe. I bet if you did that, you’d work [in the music industry].’”

Sharp switched to the saxophone in eighth grade and fell hard for the instrument, which she continued to play throughout high school and into college. Sharp said CSUN was the place where she strengthened music fundamentals and learned mostly about music theory. 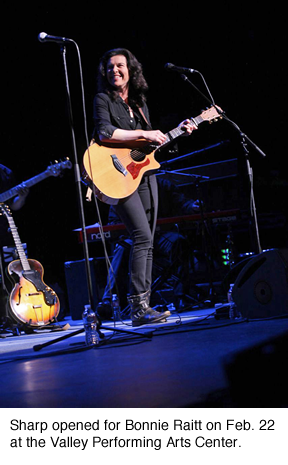 That pursuit has led to her latest album, The Dash Between the Dates, which was released in October. Sharp’s opening for Raitt was one stop in a promotional tour. Sharp has formed a bond with Raitt that began when the 10-time Grammy Award winner was pitched a few of Sharp’s songs.

“I met [Raitt] through a co-writer, David Batteau,” Sharp said. “We had written songs together, and he had cuts with Bonnie in the past. He had a connection to her and her management and I thought, wouldn’t it be cool if she could hear the songs we’d written?

“She held two songs [I co-wrote with Batteau] for her album Souls Alike,” she continued. “Bonnie ended up recording three songs [I co-wrote]. Bonnie emailed me and said, ‘I’m going to record your songs. I love them. Thanks so much for them.’ I was [thinking], are you kidding me? You’re thanking me?

“On one of the David Batteau [demos], I had played sax, and I was singing lead on all three of them,” Sharp said. “Bonnie asked if I’d like to play a little sax on that one song and maybe recreate those harmonies on the other songs. I met her in the studio, and she greeted me in the lobby — alone, with no security or anything. I walked in, and she said, ‘Maia! I’m so glad we finally meet!’ All I could think was, this is surreal. She felt like an old friend.”

She can trace that friendship. It goes a long way back to Northridge — her first class on her first day. But Sharp’s success goes well beyond the connections she made. It would be selling her short to say that’s the story. It’s part of the story for this storyteller. Her talent, drive, voice and musicianship has taken her to where she is and will continue to take her to more heights. She just got a boost at school along the way.