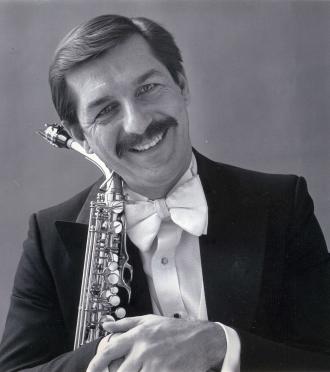 It is with great sadness that the family of Jerry Luedders announces his passing on Friday, October 5, 2018. A funeral service in memory of Jerry will be held on Wednesday, October 17, 2018 at 9:30am (gates will open at 9am) at the Church of the Hills Chapel located at Forest Lawn Memorial Park, 6300 Forest Lawn Drive, Los Angeles, CA. 90068.

Jerry Luedders believed that the art and science of teaching and learning is one of the highest expressions of one’s perfection of being. Early in his career he committed to uniquely combining a successful career as a university professor and academic administrator with his life-long commitment to the art of teaching, while simultaneously demonstrating through his own performance that which he taught.

Trained at the University of Michigan, Indiana University, Harvard University and the Paris Conservatory, Luedders first won critical national acclaim for his premier performances with the Minnesota Orchestra of Ricercari Notturni, a concerto written for him by Stanislaw Skrowaczewski. A subsequent performance at the Kennedy Center, Washington, D.C., won a Kennedy Center Friedheim Award.

Exceptionally active as a soloist and recitalist, he performed extensively on five of the six major continents including in Japan, China, Philippines, South Korea, Thailand, Australia, New Zealand, France, Germany, Switzerland, Italy, the Netherlands, Estonia, Russia, Chile, Argentina, and throughout the United States.

He appeared as soloist with the Fairbanks Symphony, Arctic Chamber Orchestra, San Antonio Symphony, numerous Civic and University Orchestras and Wind Ensembles, in the United States and Europe. He was featured on six compact discs as saxophone soloist or conductor.

His advocacy of new music and the world premieres of works written for him by Robert Coburn, George Huessenstamm, Liviu Marinescu, Stanislaw Skrowaczewski, and David Whitwell, earned him the honor of being named a Distinguished Soloist from the American Hemisphere by Harry Gee in his book Saxophone Soloists and Their Music 1844-1985.

Highly regarded as a teacher, his students, consistent winners of state, national, and international competitions, now occupy important university and professional positions in classical, jazz, and pop music. Mr. Luedders was named to the “World’s Who’s Who of Musicians”, was twice been listed in the “Outstanding Educators of America” and was selected for the 2003 and 2004 editions of Who’s Who Among America’s Teachers.

He served as Assistant Provost at California State University, Northridge where he also served as Chair of the Department of Music for over 17 years. Since 1974, he was active chair or member of on-site visitation teams for the National Association of Schools and regularly serves as a consultant to institutions. Previous positions include Dean of Fine Arts at the College of St. Benedict and St. Johns University, Director of the School of Music at Lewis & Clark College.

In addition to his administrative and teaching responsibilities, Jerry Luedders remained an active performer, speaker, and writer.