CSUN Student Already Leaving His Mark on the Music Industry

Phillip Martin’s passion for music started young. According to family legend, Martin beat out tunes on McDonald’s kids meal buckets when he was only two. Not long after that, his father, a former professional musician who played bass for artists such as Stevie Wonder and Phil and Brenda Nicholas, bought him his first Muppet Babies drum set.

“He also gave me the best advice,” said Martin, 33, now a senior majoring in music at California State University, Northridge. “I told him that I wanted to play music for the rest of my life. He just looked at me and said, ‘Then you better learn how to read it.’ He reminded me that learning — education — was the only way I was going to get anywhere.” 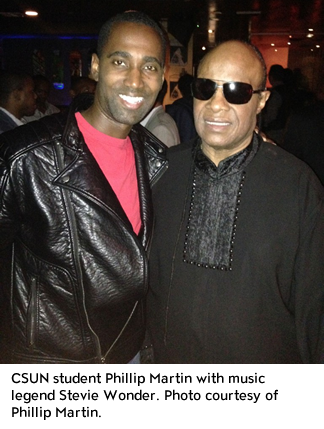 That advice stuck with Martin through middle and high school, stint in the military as a member of the Army Band and while he worked — following his honorable discharge from the Army in 2004 — as a percussionist as part of South Korea’s K-Pop scene for YDG, Dynamic Duo and Heritage of Faith. He also worked in Los Angeles’ highly competitive music industry for music legend Andraé Crouch, Will Kennedy of the Yellowjackets, jazz musician Keiko Matsui, and R&B singers Howard Johnson and Chante Moore, among others.

His father’s advice really hit home when Martin realized that he wanted to do more than just play on albums and tour.

“I love to play — I’ll always love to play — but I want to do more,” he said. “I want to arrange music, be a music director and compose. That’s how I ended up at CSUN. One of members of my church told me all about the program and how amazing its faculty are. I was introduced to Elizabeth Sellers [an award-winning composer and head of CSUN’s media composition program]. She’s one of the reasons I’m here. This is probably one of the best programs in the country, if not the world. And, even though I’ve been working as a music professional for nearly half my life, I find myself learning something new every day I’m on this campus.”

Sellers called Martin “one of the most talented natural musicians I have in my program.”

“He is easy to work with, which is why he has made great headway in the industry so far and picks things up quickly,” she said. “I expect he will work with a lot of heavyweights in the very near future.”

If he does, Martin, a married father of four, said a large portion of his success will be due to the lessons he learned in CSUN’s Department of Music.

“The level of respect I and all the students in the music program are shown from the faculty is amazing,” he said. “Even though they know I have a lot of professional experience, they don’t treat me any differently, yet they understand when work sometimes makes me late to class. It doesn’t mean I don’t have to do the work; it just means they get why I was late.”

At the same time, he said, the faculty respect his musical talent and push him to build on it, explore new genres and hold him to high standards.

He recently tapped into that experience when five-time Grammy Award-winning producer, songwriter and music programmer Devine Evans asked Martin to serve as music director for his Grammy Tribute Party last month and to play drums on a song for Queen Latifah’s new album.

Martin ran into Evans while apartment hunting in Northridge. Evans got the apartment, but two formed a connection. A short time later, Evans invited Martin to play at his daughter’s birthday party.

“I figured that it was just going to be this jam session,” Martin said. “I was playing with all these artists he had worked with before. He told me, ‘Man, you really can play.’”

A couple of days later, Evans invited Martin to do some studio work on an album he was producing. 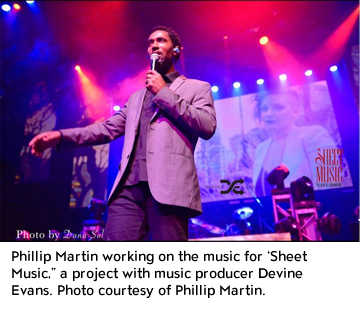 “He didn’t tell me what it was for,” Martin said. “I showed up at the studio, and I found out we were working on Queen Latifah’s new project. The producer told me what vibe he wanted, asks if I can do it. I started playing what I thought he wanted and we just clicked. We were literally creating the vibe for her new song right there on the spot. It was surreal. It was kind of a soul, R&B-type vibe. It felt really good. When we played it back, everyone said, ‘Yeah, this is it.’”

Martin said he won’t know if the song made the album until it is released sometime later this year.

In the meantime, Evans invited Martin to record a personal project and serve as music director for his Grammy party, which featured an all-female band, and to help arrange the music from the album that will accompany the publication of Evan’s new book, “Sheet Music: The Diary of a Songwriter.” The book, slated to come out later this year, aims to shed light on the sexual injustices female artist can encounter while they chase their dream of a career in the music industry.

“It was such an honor to have someone of his caliber trust me to work on his party and his personal project,” Martin said, adding that opportunities like that can help in the realization of his dream to professionally arrange and compose music.

“Who knows what the future will bring?” he said. “But working with people like Devine Evans and building on what the amazing faculty at CSUN have taught me, I have a very good feeling about my future.”