Since childhood, Wes Hambright had planned to play music professionally. 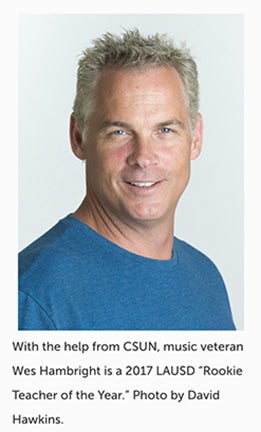 Teaching music, on the other hand, wasn’t something that immediately came to mind for the talented composer, whose music has been featured on The Ellen DeGeneres Show, American Idol, The Tyra Banks Show and programs on the Discovery Channel.

“Being a musician for such a long time, I never thought teaching would be something I’d enjoy or be able to do,” Hambright said. “I eventually started teaching private lessons years back, after it was recommended by friends and neighbors. Once I got started, I found that it was very rewarding.”

Hambright never looked back. After speaking with a neighbor in 2015 who mentioned that Daniel Pearl Magnet High School — in Lake Balboa, next to Birmingham High School — had lost its music teacher weeks before school was about to start, Hambright applied for an emergency substitute teaching credential and began to teach music classes a few days a week. The school hired him as a full-time teacher in August 2016.

Now, with the help of California State University Northridge, he’s been named an LAUSD Rookie Teacher of the Year. On Aug. 13, Hambright was honored at Dodger Stadium before the Los Angeles Dodgers took the field against the San Diego Padres.

“Because this is my first year teaching full time, I’m quite blown away and extremely honored,” Hambright said of the award. “The classes at CSUN have been indispensable. I wouldn’t have been able to do what I’ve done if it wasn’t for CSUN.”

What makes Hambright’s journey even more unique was that during his 2016-17 “rookie” year, he was taking night classes at CSUN toward his teaching credential, which he is on track to complete in 2018.

In the meantime, Hambright has an “intern credential” from CSUN, which means that he is employed as a teacher while enrolled in the university’s teaching credential program.

The musician has flourished in CSUN’s credential program and as a high school music teacher, but it’s been far from easy.

“It’s been a huge challenge, especially in my first semester [in the credential program] because I had to get used to the system at CSUN,” said Hambright, who teaches everything from guitar to choir and songwriting. “I’ve pulled long hours as a composer trying to finish a song for a film or show, but teaching five classes every day and studying for classes at night is different.”

Although challenging, teaching has been an extremely rewarding experience, he said. Hambright, who also composes contemporary ballet music in Los Angeles when he’s not teaching, noted that his favorite part of teaching at the high school level is preparing his students for bi-monthly concerts in front of family and friends.

In the classroom, Hambright stresses listening above all. He makes it a point to listen to the same music his students enjoy and asks his students to reciprocate.

“I want my students to be able to listen to hip-hop, opera, J-Pop or house music and then be able to draw comparisons between the genres,” Hambright said. “I try and make my classes a collaboration, instead of me standing on a pedestal saying I know all the information.”

Hambright credited a large part of his early success to CSUN and his mentor, CSUN Coordinator of Music Education Mary Schliff, who came to his class a handful of times over the past year to observe and give pointers.

“The support and tools CSUN teaches you on how to deal with diverse learners has been great, and [Schliff] has been really helpful in helping me teach choir classes, since I’ve never taught it before,” Hambright said. “A lot of kids sign up for that class, not because they necessarily want to sing, but because it fits their schedule and counts as their art credit. So we focused a lot last year on how to teach it.”

If the first year of his teaching career was any indication, Hambright has a bright future.

“I knew I was doing a good job, but hearing it from my peers took it to a whole new level,” Hambright said. “[Being named Rookie Teacher of the Year] made me realize I’m on the right path and doing something good.”