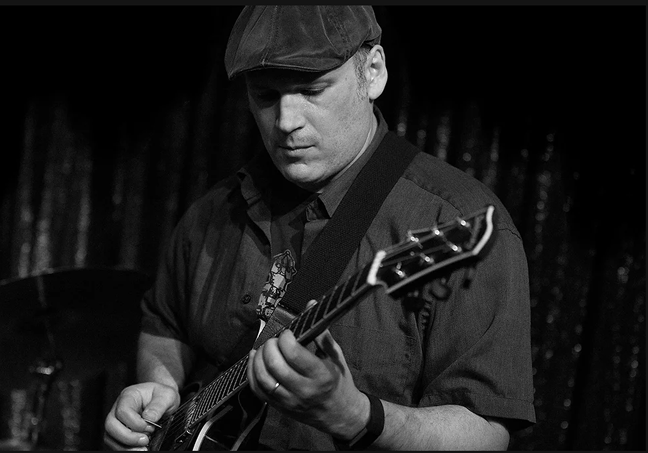 Jamie Rosenn is a guitar player committed to forging a personal sound that acknowledges the past but also points to the future. Trained at the New England Conservatory of Music in Boston, where he received a Bachelors Degree in Music, Rosenn studied with jazz luminaries Jimmy Giuffre, Ran Blake, Mick Goodrick, George Russell and Bob Moses. After completing his studies in Boston, Jamie moved to California where he attended the California Institute of the Arts (CalArts) in Valencia. At CalArts Jamie studied with Charlie Haden, Leo Smith and Joe LaBarbera and was a featured performer and composer on the ’94 and ’95 CalArts Jazz CDs. Since receiving his Master Degree from CalArts Jamie has been an active member of the Los Angeles jazz scene. In 1996 Jamie was chosen by the United States Information Agency to be an artistic ambassador and perform in a duo that took part in a seven-week tour of the Middle East and South Asia. In addition to performing, Jamie currently teaches at the Musician’s Institute, Saddleback College, the Los Angeles Music Academy, and CalState Northridge and has taught at the University of California at Los Angeles, and CalArts and Cypress College. Jamie performs as a member of the trio JoE-LeSs shOe with Jason Harnell and Matt Otto who released their self titled CD in 2007 as well as “Outsole” in 2010. Jamie also co-leads the organ trio Option 3, with Joe Bagg and Mark Ferber that released their debut CD “Points Subtracted” in early 2008.