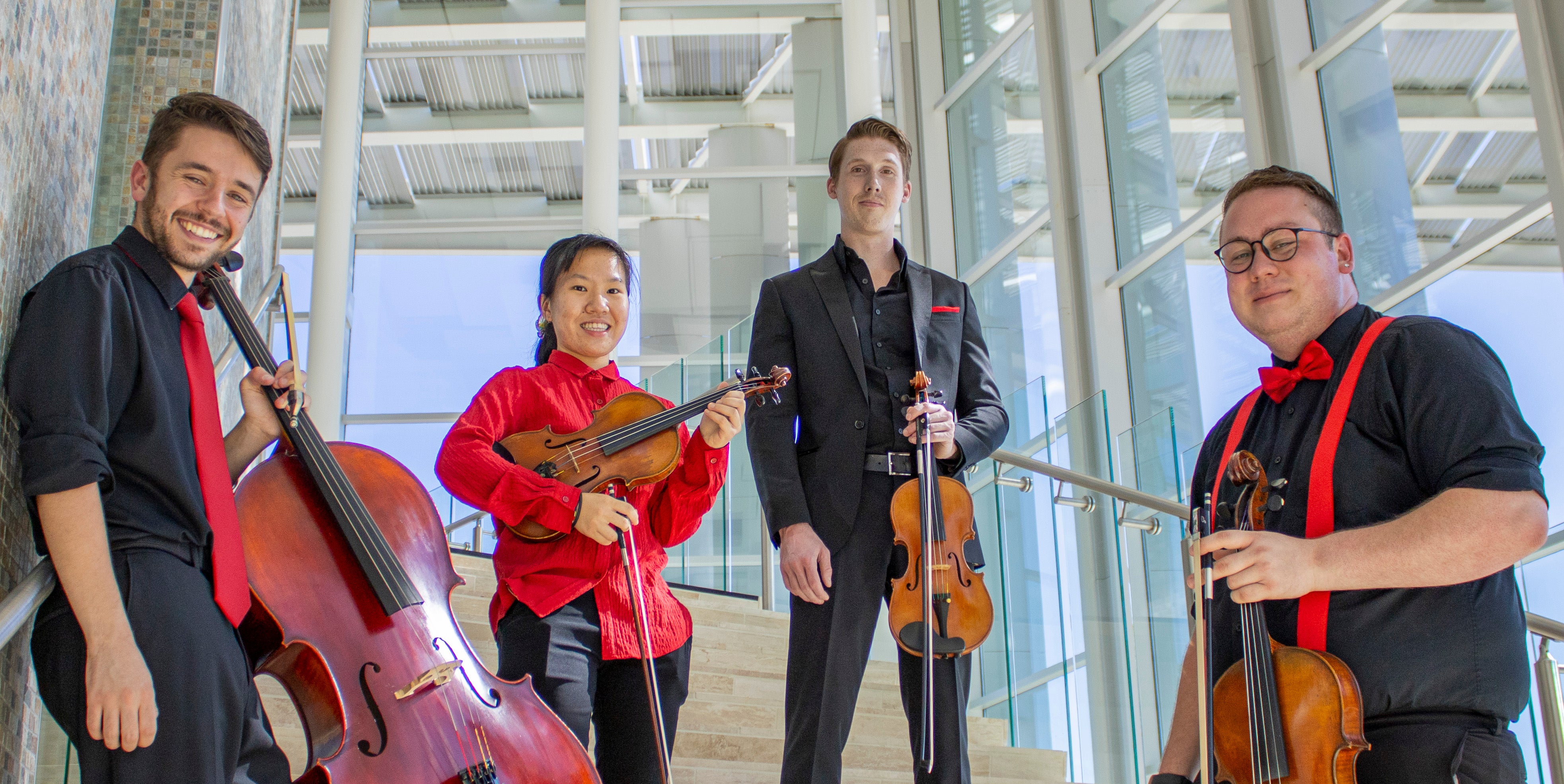 Melanie Ooi, First Violin:  A native of Selangor, Malaysia, Melanie first started learning the violin at the age of 5 and later picked up the cello and viola at the age of 11 and 18 respectively. She has then performed with various orchestras and string ensembles in her home country including the Selangor Symphony Orchestra and Philharmonia KL. Melanie has also won several prizes in the Euroasia Strings Competition, National Tainan Music Competition (Taiwan) and others. Performing in community services has also been one of Melanie's favorite past times as she has participated in some including the Make-A-Wish Ball Malaysia 2018 and the SPCA fund raising concert (A Concert for Kindness) 2019. Melanie joined CSUN in 2021 and has since received the 2021-2022 Dean’s Award for Most Outstanding Junior and the award for Most Outstanding Student in Strings. She has also performed in the 2022 edition of ChamberFest at CSUN and participated in masterclasses conducted by Martin Chalifour and Bernadine Blaha. Melanie is currently in her final year as an undergraduate here at CSUN under the tutelage of Lorenz Gamma.

Scott Johnson, Second Violin: A native of Southern California, Scott grew up in Bountiful, Utah, where he began playing the violin at the age of ten. He pursued and completed a Bachelor of Music in Violin Performance degree at San Diego State University, studying with Pei-Chun Tsai, as well as Isaac Allen and chamber music with the Hausmann Quartet. During this time, he attended a number of master classes taught by Dylana Jenson, student of Nathan Milstein. Upon graduating, he then continued his studies with Michael Tseitlin, working toward greater mastery of the instrument, and soaking in the rich tradition of teaching and playing Mr. Tseitlin provided, passed on from the likes of David Oistrakh and Leopold Auer. Throughout this time, from before music school and beyond, Scott has enjoyed wide ranging performance opportunities, from playing over a thousand shows on an electric-acoustic violin in a rock band, to working as a soloist with choirs, to freelance performances in the San Diego area, including with the San Diego Master Chorale. He has also been a dedicated teacher, enjoying working with many students and helping to guide them in their individual journeys toward mastery of violin playing. Scott is now at CSUN as a first year M.M. student in violin performance, studying with Lorenz Gamma.

Zachary Cruz, Viola: A native of Santa Monica, California, Zachary began his music studies at 8 years old. Following the choices of his older brother, he began playing the Viola through the music courses offered through his elementary school. Even though his brother stopped playing the Viola, Zachary continued. Playing throughout middle school and high school, he rose through the ranks of his high school’s six orchestras under the direction of Joni Swenson and Jason Aiello. In 2016, he began taking private lessons with Violist Virginie d’Avezac. With her, Zachary was able to grow his love of music and he decided to make music his lifelong passion. After graduating from Santa Monica High School, Zachary began pursuing his degree in Viola Performance at Santa Monica College. While at SMC, he began playing in the Santa Monica College Symphony Orchestra under the direction of Brian Stone as Co-Principal Viola. In the Fall of 2018, Zachary began his studies with Michael McLean of the Colburn School through SMC's "Applied Music Program". Through Mr. McLean, Zachary found out about the music program at California State University, Northridge which is where he transferred to after SMC in the Fall of 2021. This will be Zachary's first year in the CSUN Honor's Quartet and he is excited to be able to create music with an amazing group of musicians. Zachary is currently a Senior at CSUN, studying with Wendy Richman, and is pursuing his B.M. in Viola Performance.

Alec Glass, Cello: A native of Ridgefield, Connecticut, Alec started playing cello at the age of 9 and continued playing in orchestras through middle school. In 2012, he moved to California and began attending Westlake High School, where he played in several honors orchestras and worked his way up to the principal cellist of the Chamber Orchestra in 2015, the same year he graduated. Alec then started at Moorpark College where he first studied privately with Andrew Cook and performed in the Pepperdine Symphony. He later studied cello with Ashley Walters and performed in the Moorpark College Symphony for 3 years. During his time at Moorpark, Alec found interest in teaching privately and at local schools, and now has a private studio of his own and is a cello coach at many schools including alongside his high school orchestra director, Elizabeth Blake. Alec transferred to CSUN in 2019, finding his passion in performing in chamber ensembles and as principal cellist of the CSUN Symphony under direction of John Roscigno. As part of CSUN’s inaugural Cellobration series in 2020, Alec had the opportunity to play for many renowned visiting cellists including Ben Hong, the Associate Principal Cellist of the LA Philharmonic. In 2021, Alec was the principal cellist for The Soraya’s performance of Disney’s Fantasia under the direction of Conductor Richard Kaufman. In 2022, Alec made his solo debut where he was invited to perform the Saint-Saens Cello Concerto with Moorpark Symphony under Charles Fernandez. later that year, Alec joined the Channel Islands Chamber Orchestra as they recorded at the Fox’s Newman Recording Stage as a part of “The American Landscapes Recording Project”. Starting in fall of 2022, Alec will be joining CSU Channel Islands as Cello Faculty. This will be Alec’s third year with the Honors Quartet. Along with the Honors Quartet scholarship, he also received the Gintz Family Cello Scholarship, Outstanding Student in Strings Award, Outstanding Symphony Musician Award, and the Dean’s Award for Outstanding Graduate Student in Music. Alec has returned to CSUN for his M.M. in cello performance, now a second year graduate student studying with Diane Roscetti. 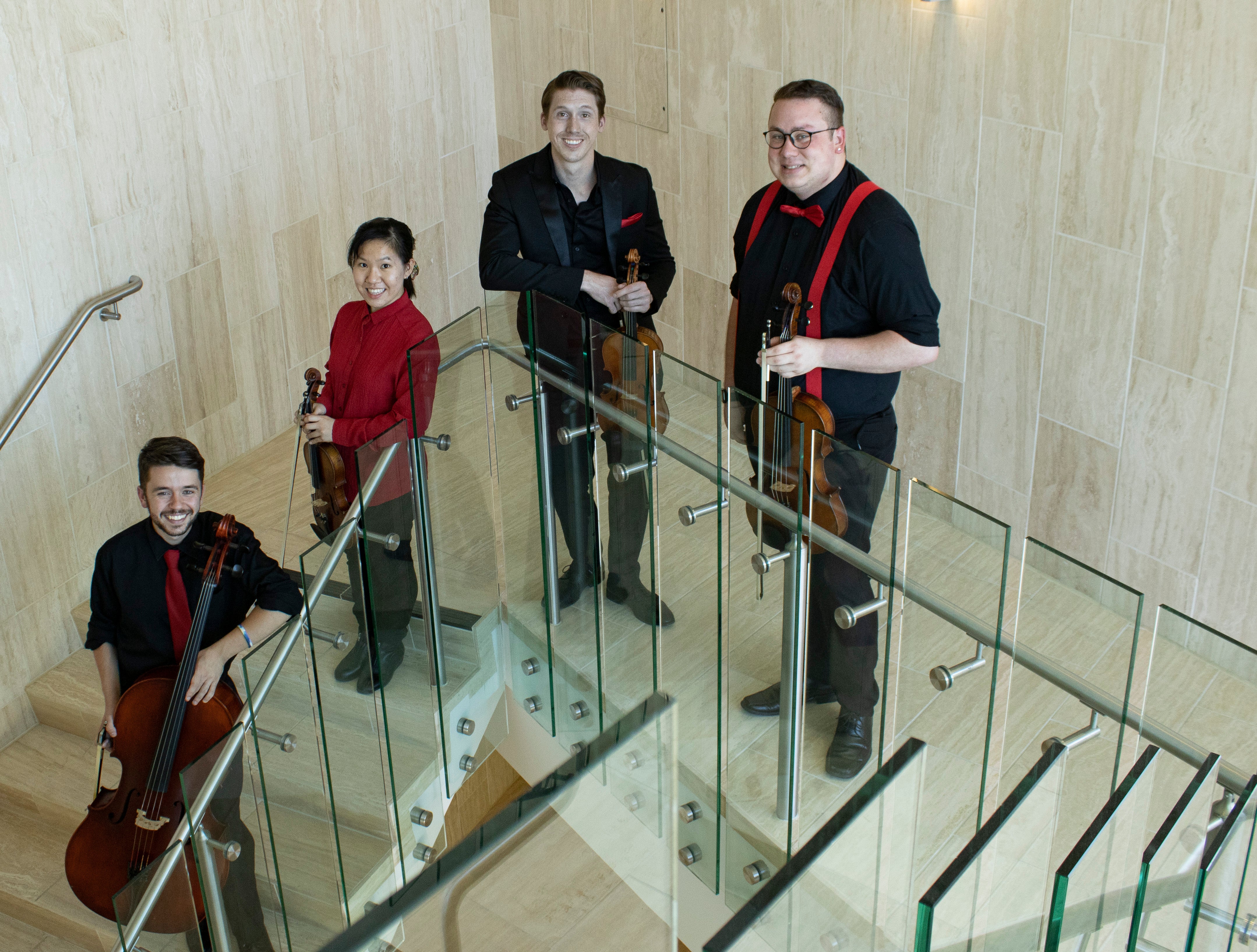