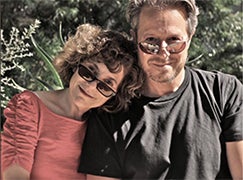 David Lawrence's scores and songs can be heard in the American Pie film series, Disney’s Descendants (for which he received a 2016 Primetime Emmy nomination), the HBO documentary, Becoming Mike Nichols, and Jiminy Glick in Lalawood, to name a few. He has also been commissioned to write two ballets for the Barak Ballet.

Faye Greenberg has received an LA Weekly award for her work on An Elephant Never Forgets—an evening of trunk songs, a Denver Post Ovation Nomination for her work on The 1940’s Radio Christmas Carol, and has written many family musicals including a musical adaptation of Judy Blume’s classic, Superfudge. Her play, The Beast of Broadway, recently enjoyed a successful run in Naples, Florida.

Together David Lawrence and Faye Greenberg contributed to Disney's High School Musical 1&2, Life with Judy Garland—Me and My Shadows, Teen Beach Movie, and Holidaze. Their song “Stick To The Status Quo” was featured on the best-selling CD of 2006, and continues to be performed all over the world.

All students, faculty, and staff are invited to attend.