Klim Shipenko '04 (Cinema and Television Arts — Film), who's been fascinated by space since his childhood in Moscow, Russia, directs a film about his childhood passion in Oct. 2017. Photo courtesy of Klim Shipenko.

Like many children growing up in the 1980s and ’90s, Klim Shipenko was fascinated by outer space. But, unlike his peers, he wasn’t fascinated by the stars or the planets — he was captivated by “the unsolved mystery of space,” he said.“[My] imagination was drawing images of what might be there, beyond the black mass.

“I remember me and all my friends wanted to be cosmonauts [the Russian word for astronauts],” added Shipenko, who grew up in Moscow, Russia. “I never became a spaceman, but I did make a movie about them.”

Since moving to Los Angeles and graduating from California State University, Northridge, Shipenko ’04 (Cinema and Television Arts – Film) has directed and written screenplays for six feature films in different genres, including a romantic comedy called Love or Not, a drama titled The Nerd’s Confession and a mystery called Who am I? 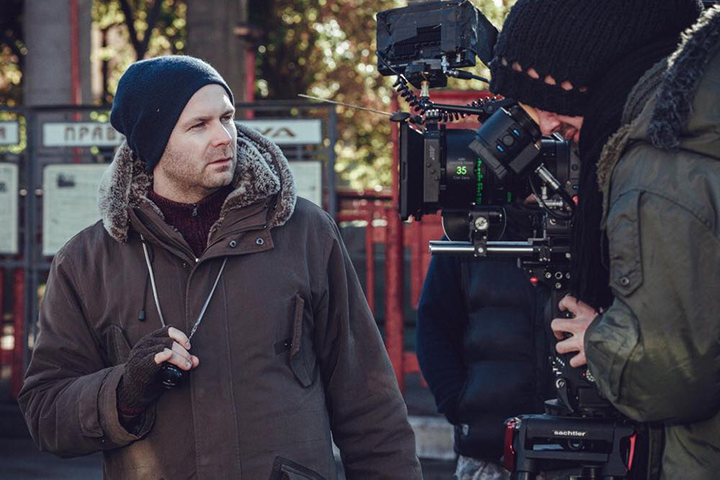 Shipenko, who has moved back to Russia since graduation from CSUN, has directed six feature-length films, including romantic comedies and mysteries. Photo courtesy of Klim Shipenko.

His most recent film, Salyut-7, is a Russian space thriller whose production values Variety recently compared to big-budget space films such as Ron Howard’s Apollo 13 and Alfonso Cuarón’s Gravity. However, the budget for Salyut-7 was 400 million rubles, or $13 million — less than one-fourth of Apollo 13‘s budget and less than one-eighth of Gravity‘s.

Shipenko’s film explores the tumultuous journey of Soyuz T-13, a spaceship manned by commander Vladimir Dzhanibekov and flight engineer Viktor Savinykh, as well as the effects of their trip on their friends and family. Salyut-7 is not yet available in the United States, Shipenko said, but he and his worldwide sales agent, Indie Sales, are hoping to screen the film in the U.S. later in 2018.

Soyuz is a real-life Russian series of spacecraft. In the 1980s, the goal of Soyuz T-13, one of the spacecrafts, was to dock and repair a space station named Salyut-7 — the film’s namesake — a feat which never before had been accomplished. By the time the Soyuz T-13 cosmonauts reached Salyut-7, the ship had multiple complications: broken solar panels, a destroyed water heater and a dead electrical system. Despite the state of Salyut-7, the cosmonauts successfully docked and repaired the “dead” space station in June 1985.

In 1999, Shipenko came to California during his senior year of high school to pursue his dream of becoming a filmmaker. As part of an international student program, Shipenko was placed with a family in La Crescenta, just northeast of Burbank, and studied at Crescenta Valley High School.

“In high school, I was interested in [being a director and filmmaker],” Shipenko said. “There weren’t that many classes in film, so I did all sorts of art classes: theatre, communications, journalism.”

After high school, the aspiring filmmaker chose to stay in LA to continue studying film and directing. He enrolled at Glendale Community College, transferred to CSUN in 2002 and received an inspiring education from several professors in the Department of Cinema and Television Arts (CTVA), he said.

“I remember [film professor] Nate Thomas very well,” Shipenko said. “He was teaching producing, I think, and lectured in some other subjects as well. I liked Nate a lot. I also liked John Schultheiss — he was head of the department when I was there. His lectures were very interesting. I took film theory and film history with him, among many other classes. The professors at CSUN … motivated me to work more and to work harder.”

Thomas, an Emmy award-winning CTVA professor, remembered Shipenko very well and said that he stood out for multiple reasons.

“What I remember most about Klim was that he wasn’t just bright and talented, but he was experimental and innovative in nature,” Thomas said. “That was a quality I hadn’t seen in many students prior to him. Klim also took every opportunity for growth and development available to him here.

“With a new state-of-the-art facility and new ‘film tools’ to play with, CSUN was the perfect place to grow for Klim,” he continued. “I have had hundreds and hundreds of students in my 29-year tenure at CSUN. Klim is among the most memorable.”

To watch the trailer for Salyut-7, please visit https://www.youtube.com/watch?v=-8BBTHmq9wc.