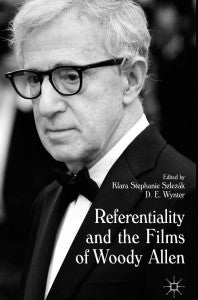 Wynter and colleague Klara Stephanie Szlezák, a lecturer in American studies at Passau University in Germany, have turned their affection for Allen’s movies into a new book, “Referentiality and the Films of Woody Allen.” The book, published by Palgrave MacMillan, is a scholarly collection of essays from academics around the world that explore Allen’s use of dialogue, imagery or other tricks of the film trade to reference works of literature, theater, other filmmakers and even his earlier works.

“People going to Woody Allen films often play ‘Where’s Waldo.’ [They] try to figure out whom he’s referencing and what artist his work is bringing back to life,” said Wynter, who teaches film directing and film as literature in CSUN’s Department of Cinema and Television Arts.

Wynter, a fan of the late 19th century Swedish playwright August Strindberg, writes about Allen’s references to Strindberg in his film “Match Point” in her contribution to the book, “‘Darling, have you seen my Strindberg book?’: Dialogism as Social Discourse in ‘Match Point.’”

“Only a few Strindberg plays are produced regularly in the States, perhaps because personal tragedy embittered and radicalized some of his later works,” she said. “But Allen’s homages to Strindberg in his films thankfully help to uphold his relevance.”

Wynter’s essay is just one of 12 by academics who take apart Allen’s films and explore how the filmmaker uses parts of the real world, such as art and literature, to enhance his stories.

“There are several reasons why we chose to put together a collection of academic essays on Woody Allen’s films,” said Szlezák, Wynter’s co-editor of the book. “First, the numerous and diverse facets that characterize his filmmaking. Part of our goal was to show just how dense his films are — how teeming with references to other works of art and others arts and media. This impacts the meaningfulness of his films.”

“Second, we were motivated by the wish to add to the existing research literature on Allen’s films in a book that is theory-based and approaches his oeuvre from a decidedly interdisciplinary vantage point,” she continued. “We further wanted to reveal the multi-layered-ness of his oeuvre by looking at a wide range of films over several decades up to his most recent work.”

Despite, or perhaps because of, its scholarly intent, the book offers a treasure trove of insights into and criticisms of Allen’s use of cultural references, from Strindberg to Italian filmmaker Federico Fellini.

“It’s pretty heady material, and what makes it even more exciting is to see young Ph.Ds who are passionate about Woody Allen’s films and bring new insight into his work,” Wynter said. “Not everyone is a raving fan. We do have unbiased criticism of Allen’s oeuvre that explore recurring references to themes, motif, forms and styles of other artists, texts and media — subtly and palpably.”

“These features are exactly what speaks to moviegoers and academics — that beneath the surface of any film, whether it is funny or tragic, there are so many layers that you can peel off and that then add more and different nuances of meaning to the films,” she said. “These may be subtle allusions or explicit references, and they are not restricted to filmmaking or film history, but reach far beyond that. I’ve watched all of his films multiple times and seem to discover something new, something that escaped me before, every time.”

Douglas McGrath, co-writer of Allen’s film “Bullets Over Broadway,” called the book a “thoughtful and rigorous collection of essays [that] explores all aspects of [Allen’s] amazing career.” Wynter was told that McGrath presented a copy of the book to Allen for his 80th birthday on Dec. 1, 2015.

“That was one of our goals, to have this book out before Woody Allen’s 80th birthday,” Wynter said. “We weren’t sure we could do it, but somehow everything managed to come together and we pulled it off.”

The book originated at a conference Wynter attended three years ago. There, she presented her research on Allen and the influence Strindberg has on his work. Her presentation caught the attention of Szlezák, who emailed Wynter and suggested they work on a book together.

Wynter said she became an aficionado of Allen’s work as a young girl growing up in the same Brooklyn neighborhood where Allen grew up.

“I went to the same high school that he did,” she said. “He was in the water, the air you breathed. He was part of the atmosphere. When I was in seventh or eighth grade, my friends and I would go see his early movies. I don’t know how we got into the theaters at age 12, but we did.”