One of the first people photographed on the red carpet and featured on the 2020 Golden Globe Awards® homepage was a CSUN student. 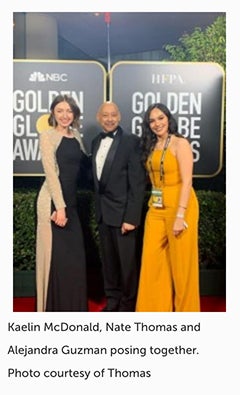 But Guzman wasn’t nominated for an award or a guest at the ceremony — she was hard at work on the red carpet. Since 2017​, CSUN has partnered with the HFPA to have two or three CSUN students enrolled in the Department of Cinema and Television Arts (CTVA) intern at the Golden Globes. When it came time to recommend a new set of interns for the 77th annual Golden Globes, CSUN professor and Film Production Option Head Nate Thomas knew exactly whom to send: seniors Guzman and Kaelin McDonald.

Guzman worked as a runner throughout the night — a person who goes on the red carpet to drop off clean video cards in exchange for content-full cards from the camera operator — and had to look and act like she belonged there if the cameras caught her.

“Of course, I only attempted entrances where I was allowed, but when you display a great sense of confidence, it tells the other person that you know where you are and what you are doing,” Guzman said. 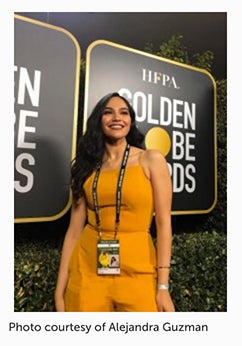 CSUN has partnered with HFPA since 1996 to support film students and help them find a foothold in the industry. The HFPA frequently gives grants to fund student film projects. In 2016, the HFPA donated $2 million to CSUN to enhance technology in the CTVA department and help create the HFPA Scholars program, in which students receive sizable scholarships and are mentored by CTVA faculty and industry professionals. McDonald was the 2019-20 recipient of the scholarship.

McDonald and Guzman are highly regarded by their peers and CSUN faculty — Thomas recalled that before she received her scholarship, McDonald volunteered hours of her time assisting an editing teacher and tutoring students to ensure they understood the material.

“They are students that peers aren’t jealous of, but look up to,” said Thomas, who also attended the event.

Guzman, the first in her family to earn a high school diploma and attend college, was recommended for the Golden Globes because of her social media skills, Thomas said. Described as a “go-getter,” Guzman was the social media manager and a multimedia team manager in CSUN Student Housing. For the Golden Globes, she served as an HFPA media intern for the event’s website, periodically uploading live updates on red carpet looks with fashion credits, interviews, speakers, winners, winners being photographed and anything else worth noting.

“Through this experience, I learned that multiple skills are needed in such an environment,” Guzman said. “You must [draw on] knowledge about your job area, pop culture, fashion, people, and even food.”

People skills are paramount, she added.

“You must know how to interact with people, and maybe not necessarily make them love you, but at least appreciate you,” she said. “The way you present yourself also plays a big role. I made sure that I looked presentable and held confidence, but not ego, wherever I went.” 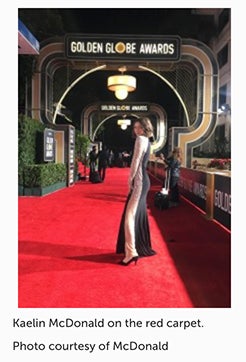 McDonald was a last-minute addition, Thomas said. The Friday before the awards, he was asked to recommend another student to assist producer and actress Silvia Bizio during the HFPA Viewing Party and After-Party, and he knew McDonald would be perfect for the job.

McDonald worked as Bizio’s right hand during the event, making sure party guests were taken care of, and she even helped hand out HFPA gift bags to Golden Globe winners while they waited to have their awards engraved.

“As a film student with big dreams to work in film and television, it was a dream come true — dressing up in a gown, walking the red carpet, mingling with filmmakers and celebrities, and honoring the best at one of the biggest events in Hollywood,” McDonald said.

McDonald and Guzman said they walked away from the event grateful and inspired, confidently looking forward to their careers in film and TV.

“It gives them self esteem, and it gives them understanding that they, too, can make it,” Thomas said.

“They are exceptional students,” he said. “I’m touched when I see them living their dreams.”