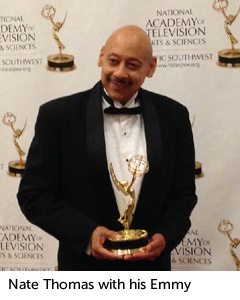 Thomas said the win was particularly “sweet” given the fact he made the project with the help of CSUN faculty and students.

“To win the most coveted award in television is an affirmation that your work is of high caliber and is appreciated and respected by your professional peers,” Thomas said. “I am humbly proud and grateful.”

The project was done through Thomas’ production company, Nate Thomas & Associates, which specializes in making PSAs. “I call it doing social work using film and other media,” he said.

Working with federal law enforcement officials and assisted by a team of CSUN students and faculty, Thomas created a series of 30-second ads last year as part of a national campaign to educate the public about intellectual property theft and cyber bullying.

CSUN Department of Cinema and Television Arts students worked alongside seasoned industry journeymen in a variety of capacities behind the camera to create the spots. Editing of the PSAs was done by CSUN students under the supervision of film professor Michael Hoggan, A.C.E, a respected film and television editor with more than 30 years of experience in the industry. In all, Thomas said, more than 20 CSUN film students, faculty and staff worked on the project.

Commissioned by the FBI and the U.S. Department of Justice, the ads have been shown as public service announcements across the country.